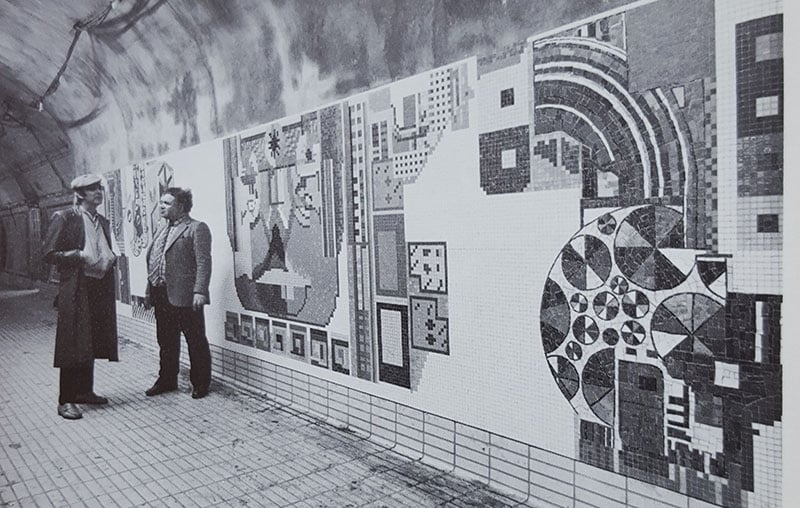 A love of music is very prevalent in the current subject matter of artist and designer Duncan Lamb who moved to Cyprus from the UK 14 years ago and settled in the village of Kathikas. It is an interest he has had all his life after starting to learn the accordion at a very young age before going on to play the electric organ in various rock bands until he got married. Now, famous jazz and rock musicians are his inspiration and form the main part of his graphite portraits.

Falling in love with the island as soon as he arrived, Duncan came on holiday here in 2004 and bought a property just three days later. And only four months after that he made the move with his wife from the UK to their new home with a purpose built studio for him to paint in. He has no regrets about his move to Kathikas and believes that Cyprus “keeps him young” offering the chance as it does to swim just down the road at the Blue Lagoon and explore the Akamas. The remote village location also gives him the peace to concentrate on his passion.

Duncan has remained in the field of art and design since graduating from art college in the UK. After working in both Amsterdam and Brussels at technical drawing, he returned to the UK and started a long career in the architectural department of the London Underground. Working his way up through the ranks to Chief of the Architectural Department, he designed many of the iconic stations including Tottenham Court Road, Charing Cross and Bank and Monument, which are still there today and crucially much admired by all.

This exposed him to the outside influences of some of the leading artists of the time including the artist David Gentleman and the famous Scottish sculptor and artist Sir Eduardo Paolozzi, considered to be one of the leading pioneers of the Pop Art movement. Duncan and Paolozzi worked together on the £20 million renovation project of Tottenham Court Road tube station over a 10-year period. The mosaic design, which can still be seen at platform level, was included after the pair travelled to Italy together on a research trip for materials. Duncan was the man responsible for commissioning Paolozzi for this project, which has been described as one of the most spectacular examples of public art in London. They worked side by side and anyone who has stepped off the tube there will not forget the mosaics that relate to all things around that area of London. Since the death of Paolozzi in 2005, it is Duncan who knows all the secrets of the designs and where the hidden iconography in the station is to be found.

The Tottenham Court Road mosaics were actually removed and restored last year which Duncan says makes him “feel very old” as they were originally commissioned in 1979. After his stint under the British capital, Duncan also worked in South Korea on the designs of the underground system for the Seoul Olympics in 1980.

But a chance commission to do a portrait for a friend led Duncan in an entirely different direction over the last four years and after 20 years of working with watercolours and air brushing, he is now very much in demand as a portrait artist using graphite. His incredibly detailed drawings are very accurate and have photographic qualities.

Now enjoying great success with his drawings after two solo exhibitions in the last year at Technopolis, Paphos and Sarah’s Jazz Club, Nicosia, Duncan’s art is more in demand than ever with buyers even travelling to his studio in Kathikas from overseas. There adorning his studio and in his portfolio are drawing of musicians including Bob Marley, David Bowie, Boy George, Adam Ant, Nina Simone and many more. “I enjoy focusing on older subjects as they have a lot more character in their faces,” he said, with Bob Marley being a favourite due to his facial characteristics – he would be Duncan’s perfect choice if he could have anyone at all to sit for him. Asked why he sells them for such reasonable prices Duncan said, “I want to sell them so I can keep doing what I love doing and people can enjoy owning one of my works”. 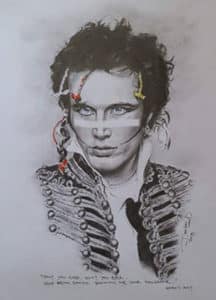 He has had the honour of being accepted on two occasions to be part of the Royal Academy Summer Exhibition in London with two of his perspective drawings in addition to holding a number of solo and group exhibitions in the UK and New Zealand while his work is in private collections in Denmark, Canada, New Zealand, Holland, Lanzarote, Switzerland, Hawaii, the UK and Cyprus.

For his upcoming exhibition Duncan has a signed portrait of Tom Jones which will be sold with proceeds going to the Princess Alexandra Charity Bereavement Fund in the UK. He likes to use his talent to give back to worthy causes and earlier this year took part in The Space Art for Charity exhibition, the proceeds of which went to Pasykaf.

On Wednesday his exhibition Rock ‘n’ Roll and All That Jazz will open at J and J Art Works in Tala, Paphos. On the opening night the musician Davey Woodford will be perform songs that complement the theme of some of Duncan’s artworks – Musicians. The exhibition will showcase over 50 of Duncan’s latest works with prices from €135 for a portrait of one of the musicians that may be Duncan himself aspired to be in his earlier musical years.