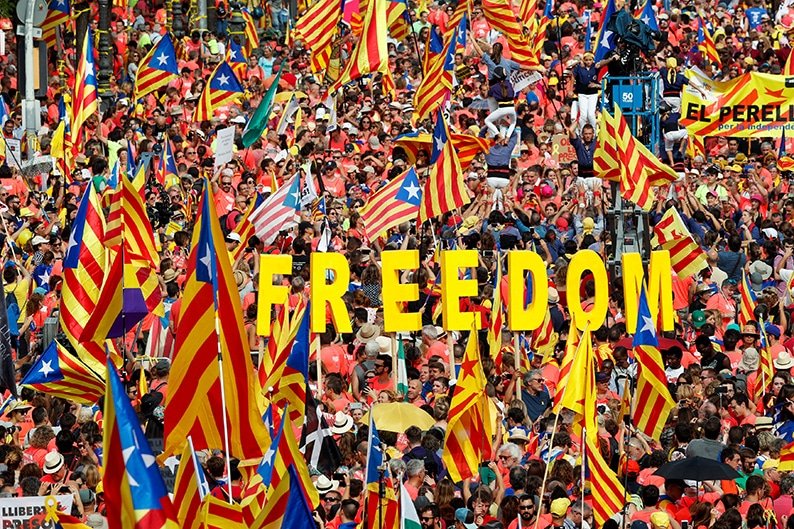 Catalan separatists began gathering in Barcelona on Tuesday to celebrate their region’s commemorative day and boost its bid for independence, in an event expected to draw hundreds of thousands onto the city’s streets.

Catalan leader Quim Torra and his predecessor Carles Puigdemont, who fled to Brussels in October after Madrid stripped him of office over his secessionist ambitions, have urged a big turnout to show continued support for a split from Spain.

“Our government has committed to making the republic a reality,” Torra said on Monday in a televised address. “Long live free Catalonia.”

Supporters of seceding the wealthy and politically divided northeastern region from the rest of the country have in recent years used the celebration of “Diada”, the Sept. 11 anniversary of the fall of Barcelona to Spain in 1714, to promote their cause with mass demonstrations.

Just under a year ago, Puigdemont’s pro-independence regional government held a referendum on independence, ruled unconstitutional by Madrid, followed by a unilateral declaration of independence.

A key motif at this year’s event are yellow ribbons representing nine politicians and activists awaiting trial in jail for their role in that independence bid.

Their trials are expected to start later this year, a potential new source of tension as Prime Minister Pedro Sanchez tries to smooth relations with the region’s current leaders.

Socialist Sanchez, who took office in June, has taken a more conciliatory approach to the issue than his conservative predecessor Mariano Rajoy, who sacked Puigdemont and his government and imposed direct rule from Madrid.

But Sanchez, like Rajoy, has stood firm against allowing a vote on secession, or any unilateral attempt by Catalonia to secede.

“It’s very hard now because the Spanish government won’t shift… They are offering nothing,” said David Castiella, a 52-year-old salesman waiting in line to visit the medieval Barcelona palace where the regional government sits, opened to visitors free of charge every Sept. 11.

Parties favouring a split with Spain won most seats in regional elections that Rajoy convened in December in the hope of derailing the independence movement.

But divisions over the question of secession are stark in a region that makes up around one fifth of Spain’s economic output and already has a high level of autonomy in areas including education and health, and its own police force.

A July poll showed 46.7 percent of Catalans saying they wanted an independent state while 44.9 percent did not.

Albert Rivera, the fervently pro-unionist, Barcelona-born head of the Ciudadanos political party which won most votes in the December regional election, said the “Diada” should be a day of celebration for all Catalans.

“But the pro-independence lobby has taken it over and turned it into a day of exclusion, hatred and attack on Spain,” he said on Twitter.

On Tuesday, tractors bearing huge yellow ribbons and red-and-yellow Catalan flags rolled into Barcelona from rural areas while yellow-hued banners bearing the faces of those in jail and the word ‘Free’ hung from city lamp posts.

Maria Angels Brugada, waiting for friends at a central square ahead of a march scheduled for the evening, said the prisoners and the politicians who fled into exile would set the mood for this year’s celebration.

“There are many people who aren’t here and are without their families,” said the 61-year-old. “It gives me goose pimples just talking about it.”

‘Child molester pardoned to live in same area as victim’