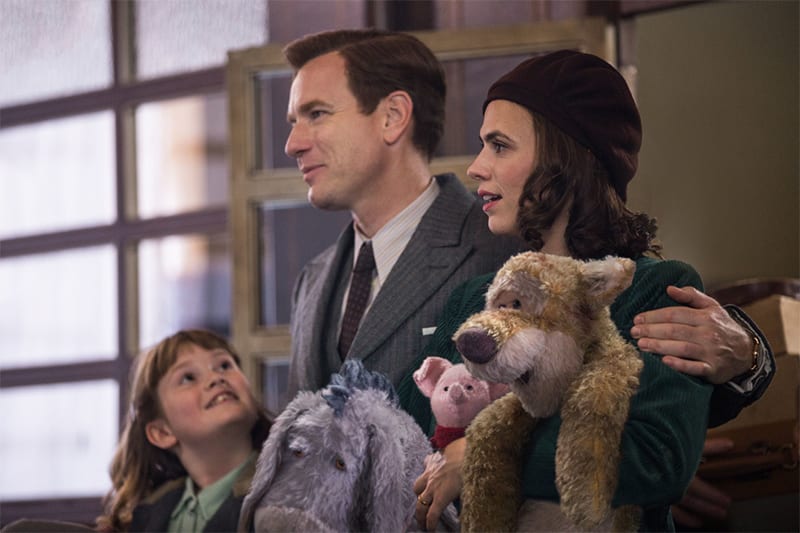 Disney have a lot to answer for. It was Mary Poppins, I believe (I can’t think offhand of an earlier example), that launched the convention of the stuffy workaholic dad whose only salvation is to get in touch with his inner child. “Let’s go fly a kite!” sang Mr Banks at the end of that film, confirming childhood as a magical time and laying the foundations for the increasing infantilisation of pop culture in the 50 years since. The mummified corpse of that magical-childhood cliché can be found in Disney’s joyless, mechanical Christopher Robin, a dead-eyed zombie movie that demeans AA Milne into the bargain.

We’ve been here before, more than once: Disney made the Poppins connection explicit in Saving Mr Banks five years ago – and of course Spielberg made Hook in the 90s with a near-identical premise, the juvenile hero of a beloved classic now grown up, grown dull, and forced to reconnect with his childhood self. In Hook it was Peter Pan, in Christopher Robin it’s the titular boy, now a 40-something husband and father working in a luggage company and played by Ewan McGregor.

‘Mr Robin’ promises to take his wife Evelyn (Hayley Atwell, wasted) and daughter Madeline (Bronte Carmichael) to the country for the weekend – but then he’s forced to work so he breaks that promise, which is the Worst Thing a Parent Can Do. More seriously, little Madeline is about to be sent to boarding school – for no better reason than because CR himself was sent to boarding school – and is generally fun-starved. “She needs to play, Christopher,” pleads Mrs Robin, but Chris won’t listen, reading the kid history textbooks instead of bedtime stories. “I haven’t seen you laugh in years,” Evelyn tells him – just in case we’ve missed the point – begging him to “be silly” again like he used to be. Cue Pooh and his friends, bringing silliness and the lure of childhood memories.

The film is crushingly obvious, wrapped up in genteel post-war-England trappings whose theme-park perfection only makes it more asinine. That said, there is one interesting angle. Unlike Hook, which defined childhood in terms of food fights and other raucous fun, childhood here is linked with ‘doing nothing’, a Zen approach that does recall the kindly, unhurried charm of Milne’s Winnie the Pooh. The film might’ve worked, though it would’ve been commercially risky, had it started to ramble and gone off on tangents (as indeed Mary Poppins did), bringing the actual tenor of childhood play to the party – but instead it stays rigidly on-message, hitting its marks, and the animated animals add very little. It may be some post-modern joke that Pooh and Co ‘do nothing’, in the sense that they get one trait each and barely a memorable line between them, but somehow I doubt it.

It’s the simple-mindedness that grates in Christopher Robin – that, and the hypocrisy of such a wilfully naïve message wrapped up in corporate formula; I think we can safely assume that none of the Disney executives who greenlit this movie ‘play like a child’ in their spare time (they’re too busy making millions instead). But it’s also just a crude, uninspired, mechanical thing, made by slumming pros who don’t really believe this guff and don’t even care enough to pretend. The script, by two indie filmmakers, has none of the quirk that makes their films memorable. McGregor goes through the motions as Christopher, an empty suit in more ways than one, bringing no vulnerability to the role, and Pooh himself (voiced by Jim Cummings) is a so-so supporting character with only a few bad puns – “I’m totally cracked!”; “I don’t see any cracks” – to recommend him. Tigger is bouncy, Eeyore is grumpy, Piglet is timid, and of course the fabled Heffalump is now a monster, as in any bog-standard kidpic.

Who is Christopher Robin aimed at? Not so much kids as families, hoping to warm adults’ hearts and make them nostalgic for childhood. Alas, it plays like the latest, weary iteration of a pointless guilt-trip parents have been laying on themselves for 50 years now. If harried dads had to go to re-education classes – like the sensitivity-training courses which are now de rigueur in the workplace – watching this film would be part of the penance.

“I’ve been a father of very little brain,” admits our hero at the end, having realised (spoiler!) that a life of work is no life at all, and a red balloon really is more important than a briefcase. I guess it’s a message that resonates (the film, to be fair, got respectful reviews) but it seems unfair to drag AA Milne – whose books glow with joshing, gently deprecating humour – into this didactic mess. “Christopher Robin, it’s you! Playing again!” exclaims Eeyore at the most heartwarming moment, extolling the magic of play in a film that’s about as familiar with playfulness – or indeed magic – as Pooh was with Heffalumps. I blame you for this, Mary Poppins.