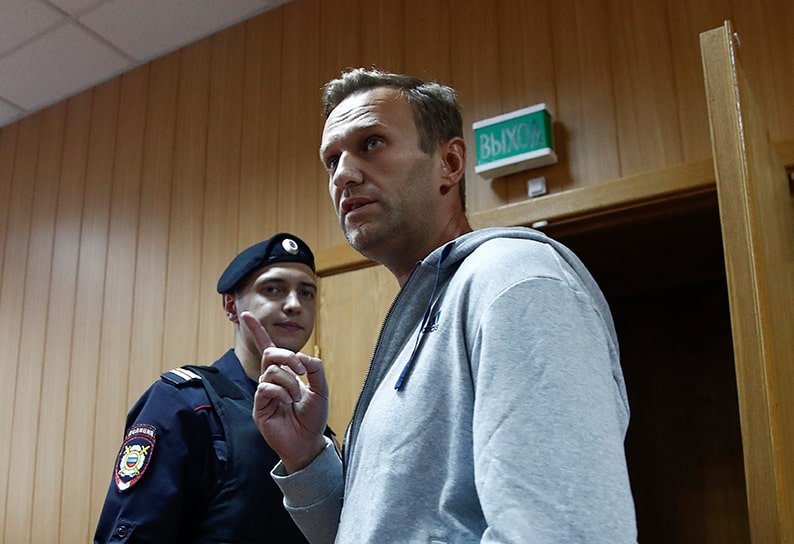 A close ally of President Vladimir Putin threatened Kremlin critic Alexei Navalny with violence on Tuesday, challenging him to a duel for making what he described as libelous and insulting corruption accusations.

Viktor Zolotov, the head of Russia’s National Guard, accused the jailed opposition leader of being a puppet of Washington and said his aim was to destabilise Russia.

Zolotov appeared visibly angry in the almost seven-minute clip aired online as he rejected allegations made by Navalny about graft in the National Guard.

“I simply challenge you to a fight – in the ring, on the tatami, whatever, and I promise to make nice, juicy mincemeat of you in a few minutes,” the uniformed Zolotov said, raising his fist.

Navalny is currently serving a 30-day jail sentence after a court convicted him last month of breaking protest laws, a move he said was designed by the authorities to stop him leading protests against pension reform across the country on Sunday.

Lyubov Sobol, a lawyer at Navalny’s anti-corruption foundation, said it stood by the allegations and was ready to defend them in court if necessary.

Navalny was unable to respond because he was in jail, she said, but would decide whether to respond personally to Zolotov or not later.

Leonid Volkov, another Navalny ally, said he was concerned by threats in the video.

Zolotov addressed the opposition leader in the video as “Mr Navalny” several times in a departure from most senior Russian officials, including Putin, who have pointedly avoided referring to him by name.

Navalny, who was barred from taking part in the March presidential elections and is broadly ignored by state television, has sought to carve out a following online publishing investigations into alleged official corruption.

“I want to tell you that the statements you’ve made about me are insulting, slanderous and false. And it is not a custom to forgive such things among officers,” said Zolotov, who has headed the National Guard since it was set up Putin in 2016.

Zolotov warned Navalny against making further allegations about him or his family.

“I promise you that before stepping over you and wiping my feet, I will put on a demonstrative show for all the members of the National Guard. And I can guarantee you will be ashamed to go outside after that,” he said.

Kremlin spokesman Dmitry Peskov said the video did not constitute a physical threat to Navalny and he appeared to partially condone it.

“Sometimes, you can fight brazen slander by any means,” said Peskov.