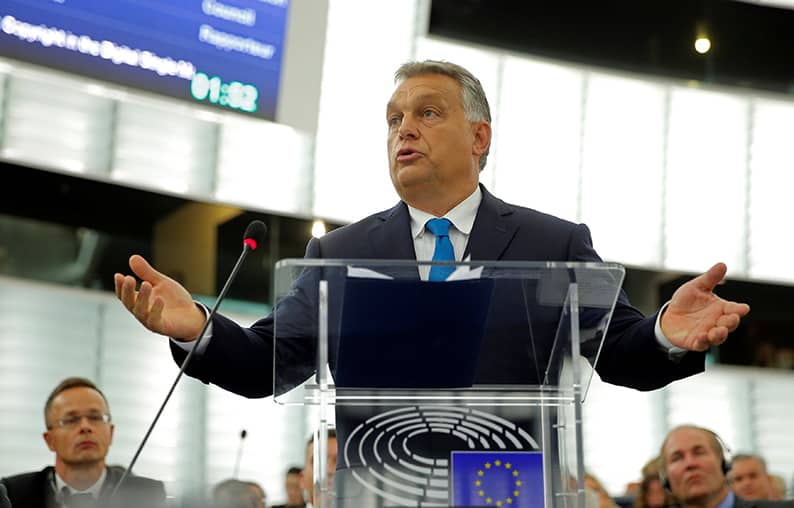 Hungarian Prime Minister Viktor Orban addresses MEPs during a debate on the situation in Hungary at the European Parliament in Strasbourg, France, September 11, 2018

The European Parliament voted on Wednesday to sanctionHungary for flouting EU rules on democracy, civil rights and corruption in an unprecedented step that left Prime Minister Viktor Orban isolated from powerful allies.

Hungary said it would seek legal ways to challenge the 448-197 vote it described as “petty revenge”.

Delivering more than the two-thirds majority required as many of Orban’s allies in the conservative party deserted him, the vote, however, has little chance of ending up with the ultimate penalty of Hungary being suspended from voting in the EU. If nothing else, its Polish ally would veto that.

But the 197 votes cast against the parliament’s first bid to launch the punitive process of the EU treaty’s Article 7 highlighted the substantial minority of European opinion who see Orban as a crusader for the rights of nation states and ethnic majorities against rules of civic behaviour agreed in Brussels.

Since sweeping to power in 2010, Orban, once a campaigner against Hungary‘s Soviet Communist overlords, has used his parliamentary majority to pressure courts, media and non-government groups in ways his opponents say breach EU rules.

He has also led opposition to German Chancellor Angela Merkel and others who want Europe to take in more Muslim refugees.

“Today’s European Parliament decision was nothing else but a petty revenge of pro-immigration politicians against Hungary,” Foreign Minister Peter Szijjarto told a news conference in Budapest. “The decision was made in a fraudulent way, and contrary to relevant rules in European treaties.”

He said abstaining votes had not been counted, changing the outcome of the vote.

With Britain about to leave the bloc altogether in March and Europeans voting in European Parliament elections in May, the row over Hungary — and Poland, which faces a similar sanctions procedure launched by the executive European Commission in 2017 — highlights tensions between nationalist and federalist camps.

Judith Sargentini, the Dutch Greens lawmaker who steered the proposal through, said after the historic vote: “Viktor Orban’s government has been leading the charge against European values by silencing independent media, replacing critical judges, and putting academia on a leash.

“Individuals close to the government have been enriching themselves, their friends and family members at the expense of Hungarian and European taxpayers,” she said. “The Hungarian people deserve better.”

Sargentini praised support for her motion from much of Orban’s European People’s Party in the chamber — the EPP includes Merkel’s Christian Democrats — and she called on governments in the EU’s Council to now take the unprecedented step of sanctioning a fellow member.

Orban had flown to Strasbourg personally on Tuesday to intervene in the debate, delivering a fiery speech that he would not give in to “blackmail” and describing the motion as an insult to Hungarians. But his failure to offer any compromise cost him support within the EPP, party officials said.

The group may now consider whether to suspend Orban’s Fidesz party. Szijjarto said Fidesz was committed to staying in the EPP but would seek ways to transform its stance from the inside.

All the applause for the Hungarian leader on Tuesday came from the far right of the chamber, notably among supporters of France’s Marine Le Pen and the UK Independence Party.

Geert Wilders, the leader of the Dutch anti-immigration Freedom Party, called the vote – which also weighed on Hungarian assets – “a bloody shame”.

“Orban is a hero and deserves the Nobel Prize. He closed the borders for Islamic fortune seekers. He protects his citizens against terror and defends the identity of his country,” he said.

The Commission has preferred to pressure Budapest through standard legal powers, but the head of the EU executive, Jean-Claude Juncker, also an EPP member, said he would have voted for the move if he were a lawmaker.