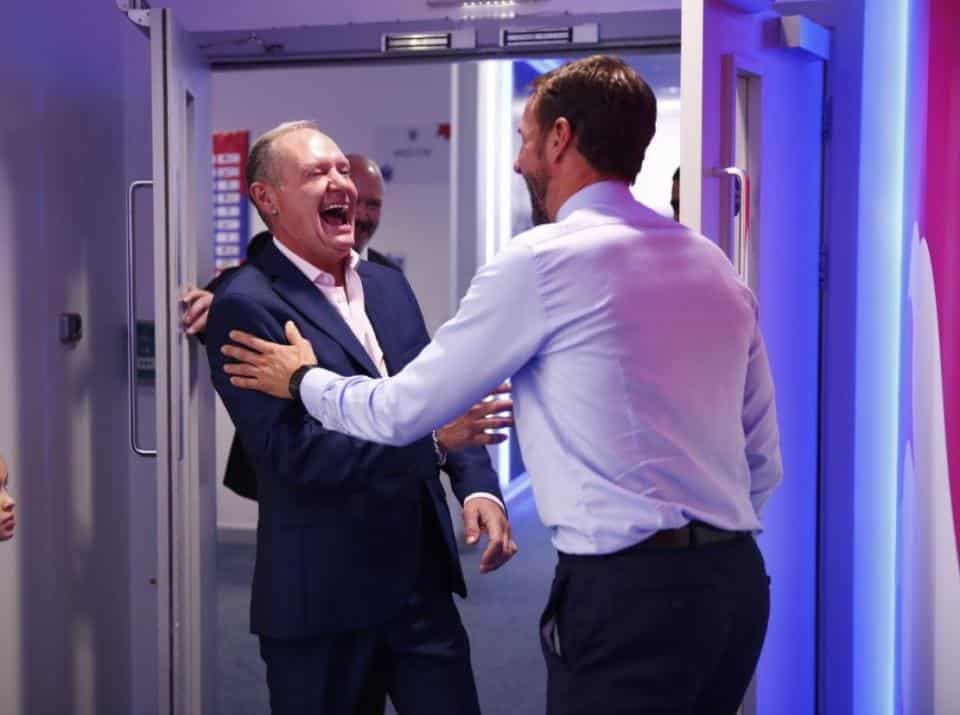 The Three Lions re-energised the nation over the summer as they reached the World Cup semi-finals for the first time since Sir Bobby Robson’s 1990 squad.

Spain brought England back down to earth by winning 2-1 at Wembley on Saturday, after which Southgate said Italia 90 star Gazza was the only midfield star in his lifetime.

It led the former midfielder to joke before Tuesday’s friendly against Switzerland to get size nine boots ready for him.

Gascoigne caught up with his former team-mate before the 1-0 win in Leicester.

“Unbelievable,” Gascoigne said. “Gareth Southgate has got England playing the way football should be played.

“Honestly, it’s the way they pass the ball about. They’re young, they’re strong and, I tell you what, they’re enjoying their football.

“There’s unbelievable talent there in the England team. Unbelievable, right?

“Gareth, as a manager, I am proud of him.

“I said it before the game, ‘Gareth, I am proud of you – thanks what you said about me, best player in the world for over 50 years’. I am 51 so I must have been good at one year of age.

“The guy is unbelievable. He’s got England playing the way we want. All we’ve got to do is the end product, putting the ball in the back of the net.”

Gascoigne was in an executive box at the King Power Stadium, where he offered enthusiastic support, posed for photos with fans and even offered pies out.

The 51-year-old made a beeline for the dressing room area at full-time, taking photos and spending time with members of the squad.

Gascoigne greeted Harry Kane with a warm embrace and had photos with a number of players, who he also gave words of wisdom to.

“Play with no fear,” he told England defender Joe Gomez with a wink.

Gascoigne caught up with Southgate before the game and gave him another hug afterwards.

“He did offer to play (before the game),” Southgate said.

“A lot of hugs before and after the game. It was lovely to see him. It’s been quite a while.

“His passion for the game and for England is always huge. He’s desperate for the young lads to go and do well and enjoy their football.

“It was great to see him. In terms of our players, they’re aware of him, but (Marcus) Rashford was born in 97, Trent (Alexander-Arnold) in 98. That makes us all feel old, I guess.”