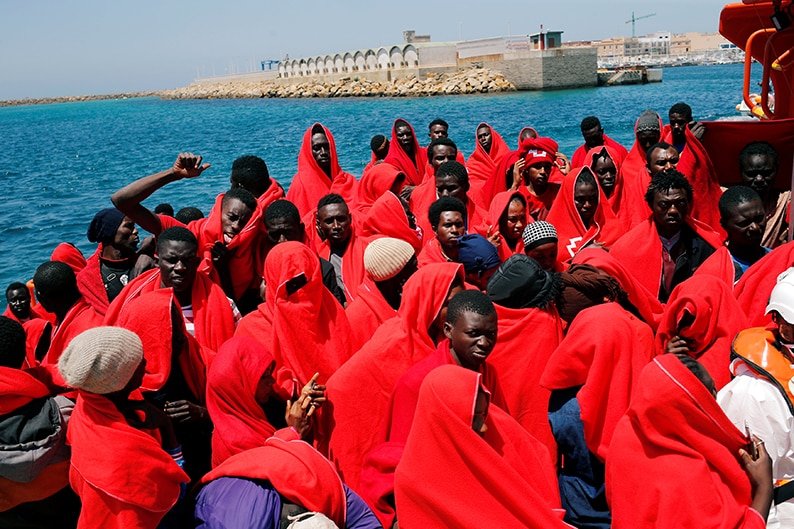 Migrants on a rescue boat at the port of Tarifa

European Commission President Jean-Claude Juncker has unveiled plans to recruit 10,000 staff to the EU’s coastguard and asylum agency to improving border policing and speed up the deportation of illegal immigrants.

The proposals come as EU nations argue over who should take responsibility for people rescued in the Mediterranean Sea trying to seek better lives in Europe.

“External borders must be protected more effectively,” Mr Juncker told EU lawmakers in Strasbourg in a state of the European Union address.

He said the EU Commission is proposing a standing corps for the border and coastguard agency numbering 10,000 staff, including guards and migration experts, to be up and running by 2020.

Mr Juncker said the corps should be funded by some 2.2 billion euros in EU money from the bloc’s next long-term budget.

But EU nations still have to endorse his plans. Beyond that, the Commission’s idea of what the 2021-2027 budget should look like and what its priorities should be are certain to differ from that of member states.

The border and coastguard staff would be able to check ID papers and stamp travel documents, detain people who are crossing the border without authorisation, and help ensure those not eligible are deported.

Many nations have expressed concern about having their borders policed by staff from other countries, even if they are European partners.

In recent months, Italy’s new anti-migrant government has refused to allow some ships carrying rescued people to enter its waters, routinely leaving the boats stranded at sea for days while a short-term solution is found. Austria, France and Malta have argued over who should take charge.

“With every new ship we can’t be talking about ad-hoc solutions for the people on board,” Mr Juncker said. “We need a lot more. We need more solidarity, and solidarity must be lasting and organised.”

EU leaders meet in Salzburg, Austria, next week to thrash out better ways to manage the arrivals, many reaching Italy from lawless Libya.

Mr Juncker’s proposals also include a plan to help countries deport people who do not qualify for asylum because they do not face the threat of death or violence in their home countries. Just over one in three people denied international protection are actually sent home.

The border and asylum agencies would help identify those to be returned, obtain travel documents – often a time-consuming business – and prepare the paperwork so countries can send them back.

Mr Juncker noted that one of the jewels in Europe’s crown – the passport-free Schengen travel area – is under threat due to barriers and tougher border ID checks being imposed by some countries. He branded such obstacles “an unacceptable backward step in Europe”.