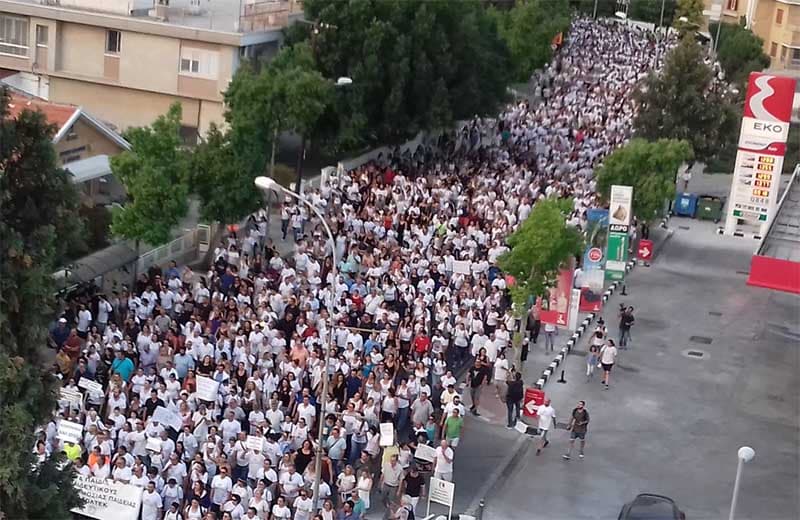 Thousands of teachers protesting the government measures in August

PRESIDENT Nicos Anastasiades said on Wednesday the government would not succumb to blackmail as teachers announced a 48-hour strike next week.

All three teachers’ unions – Poed, Oelmek and Oltek – decided to go on strike next Tuesday and Wednesday after their latest proposals were rejected by the government in a dispute that has been going on since early July.

It was also announced that they would draw up a plan for staggered strikes.

Following the meeting, the head of primary education union Poed, Fylios Fylaktou, said that the “proud world of education” was reacting to “illegal machinations” with a first, 48-hour strike.

The head of secondary education union Oelmek, Yiannos Socratous, said that the government had forced them to reach this point and asked society to show understanding.

The present bone of contention is the credit system the government had proposed last week that it hoped could lead to an interim deal to be in force until the end of the year. It was a bid to ease the tension and satisfy some of the teachers’ demands while leaving room for dialogue between the two sides.

The teachers counter proposed on Tuesday that, based on the credit system, a teacher who teaches more hours than the curriculum specifies, for example, should receive credit for those hours in the next school year. The government rejected that proposal.

Education minister, Costas Hambiaouris, told state broadcaster CyBC on Wednesday that the unions’ latest plan “was predetermining the result of the dialogue”.

As the three unions were holding their joint meeting in the evening, President Nicos Anastasiades said that the government would not succumb to blackmail by any trade unionist.

“The government is mandated and elected by the people to govern, not to be governed by trade unionists, who, agree on something and the next day they negate what they have agreed on,” Anastasiades said.

He said that the government had made every effort to engage in dialogue with trade unions, and had “even retreated from positions that have been condemned by society”.

Anastasiades referred to “workers who have the privilege of working less, getting paid more, without bringing the expected results that society expects”. This, he said, could not be.

He added that they had reached an agreement with teacher unions on July 27 on launching a dialogue which the unions had then broken.

“On August 23, a proposal had been jointly formed with the trade union leaders, on September 6 they shook on it […], unfortunately due to the different trends within the trade unions, we have the current results.”

It must be understood, Anastasiades said, that one’s right is one thing but using that right at the expense of 120,000 children and thousands of parents, was another. At the same time, he said, it was also a provocation to workers in general.

“I want to remind you that we have the highest budget among the EU member states in the field of education. We have the best paid teachers – ranked among the top six – we have unfortunately the fewest teaching hours, but, the worst is, (we have) the worst learning outcomes,” he said.

The government is ready, he said, to move on to dialogue and find appropriate solutions.

“One element of course is the dialogue on the issue of teaching time which is not the most (important),” Anastasiades said.

He added most important were the evaluation of educational work, teacher and pupil evaluations, issues related to the further education of the teachers and improvement of public schools.

Members voted last week to authorise their unions to take any measures they deemed suitable, including a strike.

The dispute started in July after the government decided to make changes to the teachers’ terms of employment by reducing their exemptions from teaching hours and curtailing union bosses’ rights, such as dealing with union matters on taxpayer money.

Oelmek’s Socratous said that they have also formed a committee that, in cooperation with their legal advisers, would take measures both within and outside Cyprus on the issue of the general depreciation of dialogue and the right to union representation.