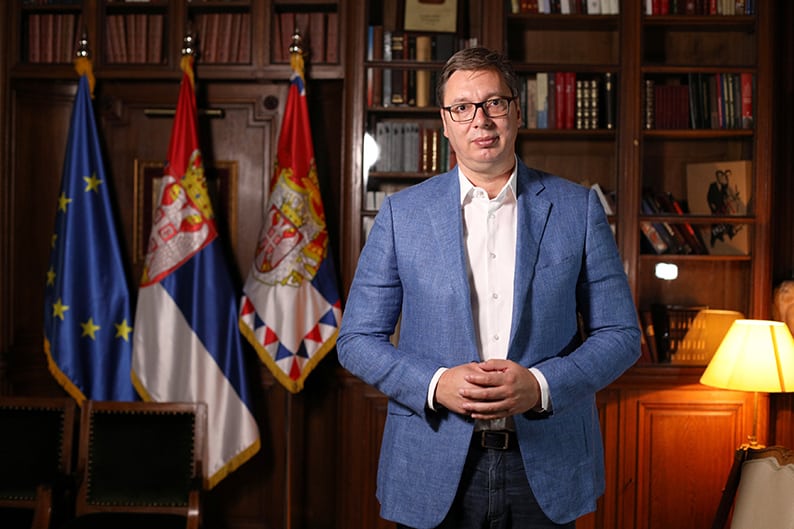 Serbian President Aleksandar Vucic said he would seek a guarantee that his country would join the European Union in 2025 as part of any deal with neighbouring Kosovo which would pave the way for both states to enter the bloc.

Serbia and its former province Kosovo committed to an EU-mediated dialogue to improve relations and resolve all outstanding issues between them in 2013, but little progress has been made since then.

“If we ever reach an agreement (with Pristina), Serbia would need to get clear guarantees that it would become an EU member state in 2025,” Vucic told Reuters in an interview.

Vucic and Kosovo’s President Hashim Thaci abruptly called off a face-to-face meeting in Brussels last Friday, where the two sides were expected to discuss a land swap plan for the first time. They are now expected to meet later this month.

Vucic said it could take up to 10 years for Belgrade and Pristina to reach an agreement due to many their many differences of opinion.

“Sometimes I smile when I hear how people simplify things and say that the deal comes down to a line — I will give you three villages and I will get six villages (in return),” he said.

“If we were ever to reach a deal (with Pristina) it would have to be an overall deal that would include not only relations between us and the Albanians in Kosovo, but it would also have to include a resolution of our EU path and further economic progress,” he said.

Serbia lost control over Kosovo in 1999 after a Nato bombing campaign to stop Serb forces killing and expelling Albanians during a two-year counter insurgency war.

Kosovo declared independence in 2008 and is recognised by more than 110 states, but not by five EU members, Russia or Serbia.

The United States and some EU officials have said they would not oppose a deal if the two local leaders can reach an agreement, but Germany has rejected the idea saying it could revive old hostilities from the ethnic wars in the 1990s.

“It is impossible to have a final deal without the support of Germany, Russia, the US or France,” Vucic said.

Vucic said that campaigning for European Union parliamentary elections next May and the rise in popularity of right-wing political parties in Europe could dim the prospects of reaching a deal between Belgrade and Pristina.

“Do you think that citizens of those (EU) countries would like to hear about the prospects of Serbian membership (during the campaign)?,” he said.

Most Serbs view Kosovo as the cradle of their nation and Orthodox Christian faith and Serbia, under its constitution, considers Kosovo an integral part of itself.

“Right now we don’t know where our borders are,” Vucic said, adding that an agreement between Pristina and Belgrade would contribute to stability in the region.

“No one in the region should be afraid of any agreement between Serbs and Albanians in Kosovo, the region will be more stable, stronger and economically more attractive,” he said.

A final deal with Serbia would also enable Kosovo to become a member of the United Nations.