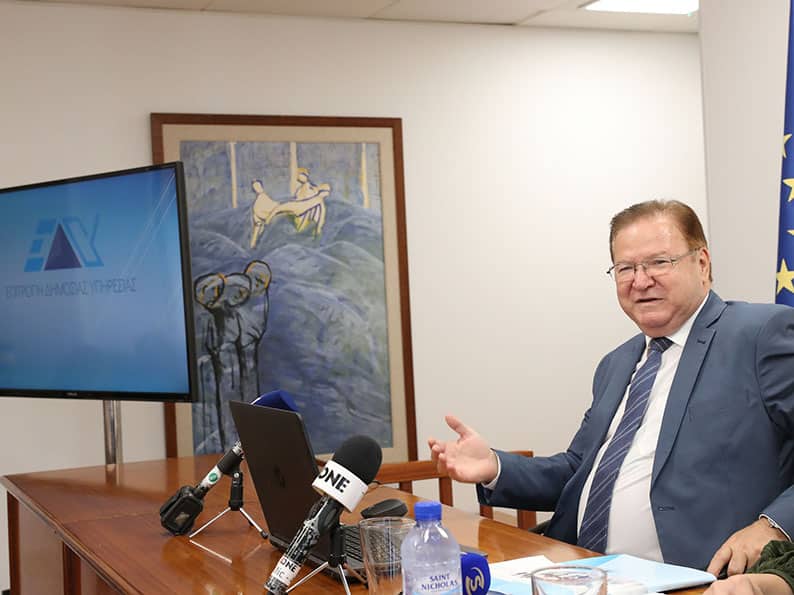 The head of the PSC, Georgios Papageorgiou

One civil servant was fired and eight others forced to retire since last year after being found guilty by a court for a number of offences including taking bribes and trafficking in illegal substances, the Public Service Commission (PSC) announced on Wednesday.

It also said that following a long period of a hiring freeze in the public sector due to the economic crisis, over 22,000 expressed interest in the 176 job posts announced over the past few months.

In a press conference to present the findings of its annual report for 2017, the head of the PSC, Georgios Papageorgiou, said that last year four civil servants had been forced to retire, one was fired, another was demoted and three more were severely reprimanded. During the first seven months of this year, another four civil servants were forced to retire and one was demoted.

Among the cases the PSC was called in to handle are civil servants found guilty by a court for taking bribes, but also for trafficking illegal substances. There had been also 13 suspensions in 2017 and three until July this year.

One civil servant was forced to retire after prolonged, unjustified absences from his workplace and for failing to present for duty.

He also stressed that the public service ought to be viewed by everyone as “a national affair and not a personal one or that of any organ or political party”.

Papageorgiou said that the PSC is now required to handle much more serious offences than in the past and that it is enforcing harsher penalties where necessary.

There had been very few cases in the past, Papageorgiou said, where the PSC had dismissed someone or called for forced retirement.

He said that the statutory posts in the public service currently amount to 16,068, of which 12,193 are filled.

He also said that the academic qualifications of most civil servants are very high. Almost 60 per cent of persons hired last year to fill 85 posts in the civil service had degrees, even graduate degrees, even though no university diplomas were required.

As regard the distribution of positions by gender, Papageorgiou said that in scientific and non-scientific admissions there is a clear predominance of women. He stressed, however, that “gender is not an element that the commission takes into account in its choices.”

Papageorgiou said however, that reforms were necessary for an effective civil service and called for the introduction of examinations, competence tests and assessment centres for senior positions.