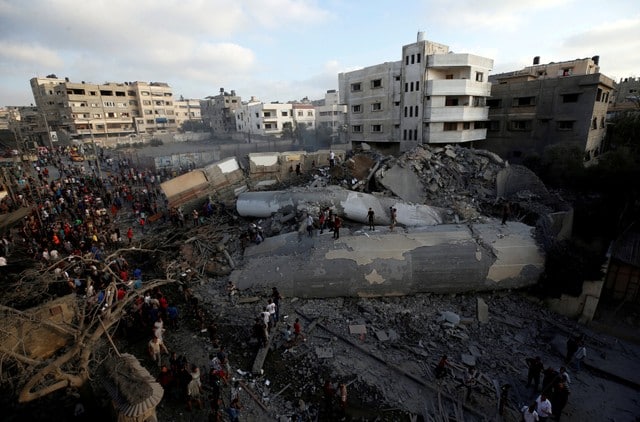 Palestinians gather around a building after it was bombed by an Israeli aircraft, in Gaza City

The Israeli military said it used force necessary to prevent border breaches by some 12,000 Palestinians who massed at several points near the fence, some of them hurling rocks and firebombs at troops under cover of smoke from burning tyres.

Friday’s dead, one of them a boy whom medics said appeared to be around 14 years old, brought to 177 the number of Palestinians killed since the sometimes violent protests were launched on March 30 to press several demands against Israel.

The period has also seen occasional shelling exchanges between Gaza’s Islamist Hamas rulers and Israel. An Israeli soldier was killed by a Gaza sniper and Israel has lost tracts of forest and farmland to cross-border incendiary attacks.

Israel’s tactics against the protests have drawn foreign condemnation, though Washington has backed its ally in accusing Hamas of staging the mass-mobilisation to distract from Gaza’s poverty and governance problems and to provide cover for armed Palestinian border incursions. Hamas has denied this.

The Israeli military said that, twice this week, its patrols discovered and dismantled bombs that had been planted for use against them at the fence. Early on Friday, several Palestinians crawled to the fence to throw a pipebomb at troops, who fired back, the military said. There was no word of casualties.

The protesters want rights to lands Palestinians lost during the 1948 war of Israel’s foundation, as well as the easing of a crippling blockade that Israel, with the help of neighbouring Egypt, has placed on Gaza to isolate Hamas and deny it weaponry.

U.N. and Egyptian mediators have been trying to reach a deal to calm Gaza, where Israel and Hamas have fought three wars in the last decade. The brokering efforts have been complicated by Hamas’s feuding with Western-backed Palestinian President Mahmoud Abbas, who has restricted funding to the coastal strip.