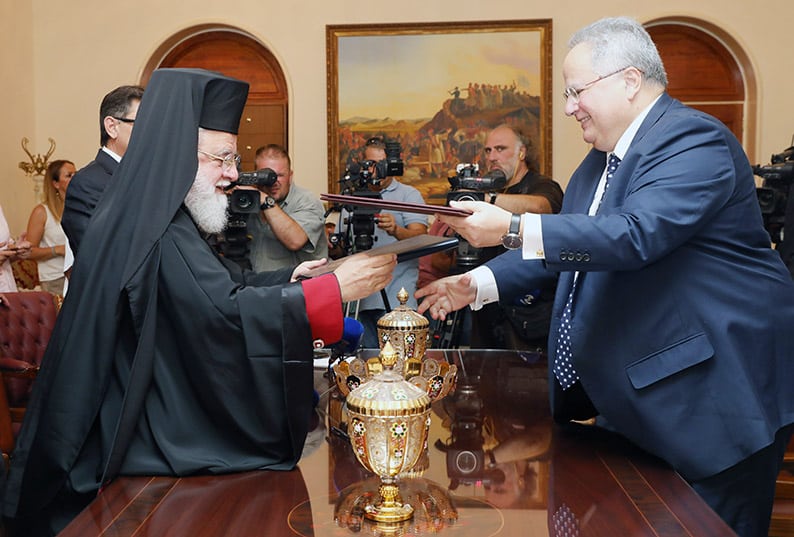 Proper preparation is imperative before the launch of a new round of settlement talks in order to have a positive outcome, but the Turkish side must also be responsive, Greek Foreign Minister Nicos Kotzias said on Friday.

Kotzias was in Cyprus to sign a deal on behalf of Greece with the Bishop of Kykkos concerning the construction of a new Greek embassy on church land.

Referring to the Cyprus problem, Kotzias said that a new round of talks should begin following the appropriate preparation for a positive outcome.

On whether there were any indications as to the intentions of Turkey following his recent meeting with Turkish Foreign Minister Mevlut Cavusoglu, Kotzias said that “indications do not arise on their own, but we have to create them.”

Asked whether he would seek to prepare the ground for the talks with Cavusoglu or the UK, as the third guarantor, the Greek foreign minister reminded that in 2016 he had stressed the need for proper preparation “to investigate whether an agreement can actually be reached , because I find it counterproductive to go into negotiations that lead to deadlocks and referenda that do not respond positively to the proposals being made.”

Kotzias also said that there was a need for a better cooperation spirit from the Turkish side than in the past and that is why he could not guarantee anything other than he would do his best.

He also said that he would not characterise the outcome of the talks in Crans-Montana in Switzerland last year as a “shipwreck”, as, following that round of negotiations, “we go to the next one with better positions than in the previous one.”

Usually, he said, the Cyprus problem, after a round of negotiations was led to worse conditions than the previous round. “We now have on the table the issue of guarantees and security that the UN Secretary-General has accepted and adopted during Crans-Montana, and so we will start from better positions than previously and so we are in creative course,” Kotzias said.

On Monday, President Nicos Anastasiades will discuss developments on the Cyprus problem, in light of the contacts held by the UN Secretary-General’s envoy, Jane Holl Lute, and the forthcoming meetings in New York on the sidelines of the UN General Assembly during a meeting with Greek Prime Minister Alexis Tsipras in Athens.

They will also talk about Kotzias’ meeting with Cavusoglu last week in Izmir, Turkey.

Government Spokesman, Prodromos Prodromou, confirmed this week the close cooperation between Cyprus and Greece and that they two countries are in “absolute coordination”.

During a meeting in Paris with Cypriot expatriates, Prodromou said that the aim in the next period is for Cyprus and Greece to join forces against Turkey and its aspirations, in order to make Cyprus “truly independent on the basis of cooperation of the Cypriots themselves without the heavy shadow of the Turkish State.”

Anastasiades and Turkish Cypriot leader Mustafa Akinci are to have next week separate meetings with the UN Secretary-General’s Special Representative in Cyprus, Elizabeth Spehar. The meetings are in view of forthcoming developments in the Cyprus problem and in the framework of the preparation for the meetings which Anastasiades and Akinci will have in New York with the UN Secretary General.

Turkey talking to all sides in Syria conflict for Idlib ceasefire