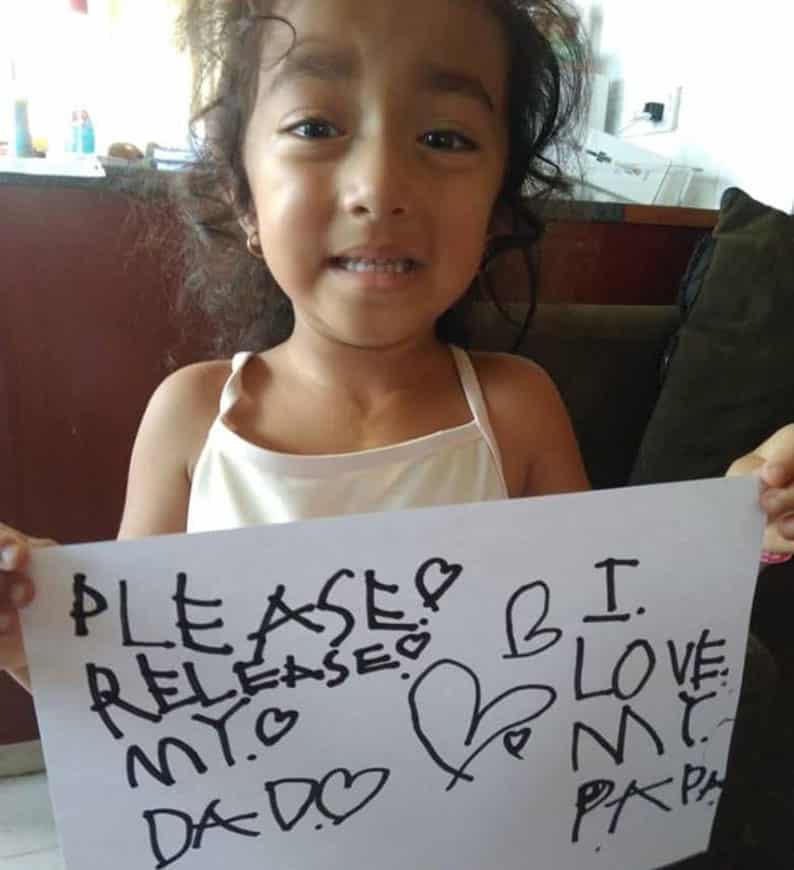 The father of a baby that underwent a life-saving operation in Israel in 2013 after the minister of health stepped in, is still being held at Menoyia detention centre in Nicosia, almost two months since his arrest at Paphos immigration in July.
John (Sanjeev) Dhull, 36, visited immigration at their request to collect a letter and was arrested. On July 20 he was moved to Menoyia in Larnaca where he remains.

His daughter, Zoe, aged 5, is distraught that her father has still not returned home to Paphos and asked her mother to help her write a sign to send to friends of her parents and the media, to try and help her father.

“Zoe is so not doing so well, she is upset most of the time and not eating or sleeping properly and losing weight, I am worried about her. Zoe understands that her father is being held, but not really why he can’t come home. She wanted to do something to help and asked me to write out ‘Please release my Dad- I love me Papa,’ which she then copied and drew hearts on,” Dhull’s wife Virginia said.

Zoe’s mum said she was unsure of sending out the photo of Zoe, but that the determined youngster asked her to do it to try to help her father.
She added that the office of the Children’s Rights Commissioner, Leda Koursoumba, had contacted her this week for information about Zoe and their circumstances.

“It is difficult for us to stay alone and support ourselves.”

She said that whilst officials from the welfare department had visited the duo at home, she made a request for help.

“They said they couldn’t help us as we are not European, refugees or asylum seekers.”

The pair are reliant on the help of friends, she said.

When Zoe, now 5, was born in Paphos general hospital on June 25, 2013, she was diagnosed with a heart defect, which had gone undetected during pregnancy.

Her parents had less than two weeks to raise the €15,000 needed to pay for a vital cardiac catheterisation in Israel as the operation could not be done in Cyprus.

They had no private medical insurance and were unable to obtain a state medical card as their visas had expired. The health ministry stepped in and offered to pay the costs, and at just three weeks old Zoe underwent the life-saving operation at the Schneider Children’s Medical Centre in Israel. The family are extremely grateful for this act. She will most probably need another operation at the age of 16 and undergoes regular check-ups in Nicosia.
Dhull had been working at a restaurant in Paphos ( he had a valid work permit) at the time of his arrest, and was supporting his family. However, the permit was revoked, according to officials.

The ministry of the Interior listed the couple’s immigration history, noting that they both remained in Cyprus illegally after their visas had run out – before Zoe was born – and that Dhull was given a ‘final residence permit’ which expired in October 2017. The ministry said this ‘cancels out any requests filed by him, his wife or daughter’, despite him having a work permit valid until October 2018.

However, Dhull’s Nicosia-based lawyer, Maria Serghi Mirbagheri, is waiting for a response from the office of Leda Koursoumba, and a request to put the family unit first on humanitarian grounds by granting Dhull an extension.

The lawyer noted that she is not disputing the points made by the ministry, adding that subsequent permissions to stay had been granted on humanitarian grounds. She said that although Dhull was given a letter by immigration to leave Cyprus, it also includes the right to appeal the decision, which is what he is doing.

She said: “I hope that it’s just a matter of time before he comes out”.

Dhull’s first court appearance to appeal this decision is slated for October 9.

Speaking from Menoyia on Friday, Dhull told the Cyprus Mail that as he is allowed his phone at the centre, he speaks to his daughter every day, but that she continually questions when he will be going home and cries.

“It’s very upsetting for both of us. I keep telling her maybe next week, but she is fed up with hearing that. I would like to go home to Paphos, back to my family and my job and take care of them,” he said.

Turkey talking to all sides in Syria conflict for Idlib ceasefire