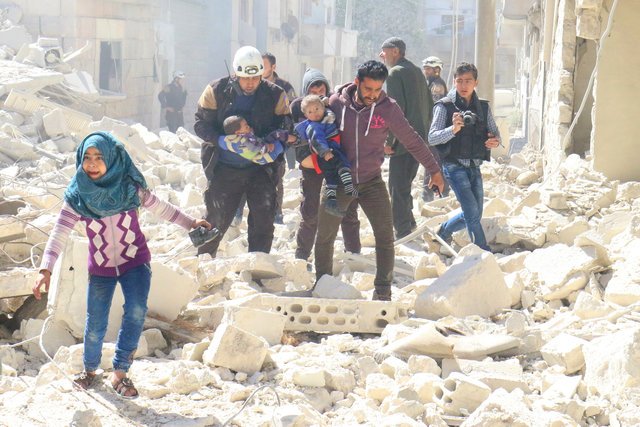 Turkey said on Friday it was talking to all parties in the Syrian conflict to prevent a government offensive on Idlib ahead of talks between Russian and Turkish leaders, who support rival sides in the looming battle for the rebel-held region.

Ankara failed last week to win agreement for a ceasefire from Russia and Iran, President Bashar al-Assad’s main backers, but there has been a recent lull in air strikes and a pro-Damascus source indicated a ground attack may not be imminent.

Turkey has reinforced a dozen military posts inside the Idlib region, which lies across its southern border and is controlled by Turkey-backed rebels and jihadist fighters, trying to forestall a government assault.

Chief of Staff Yasar Guler visited military positions on the border and was briefed by commanders stationed in the Idlib region, Turkey’s armed forces said.

Foreign Minister Mevlut Cavusoglu said Turkey had also contacted foreign ministers of several countries and was in touch with “all actors in Syria”.

“We are making an effort for a ceasefire in Idlib,” he said, repeating Turkey’s call for targeted operations against jihadist militants, including the Tahrir al-Sham alliance, instead of an indiscriminate onslaught.

The United Nations has warned that an offensive in Idlib could trigger a humanitarian catastrophe in an area where 3 million people live. Turkey, already hosting 3.5 million Syrians, says it cannot take in another wave of refugees.

Turkish presidential aide Ibrahim Kalin said after talks with Russian, German and French officials in Istanbul that they agreed the consequences of an attack on Idlib would be severe and a refugee wave would impact not just Turkey but Europe too.

“Our expectation is to maintain the current status in Idlib, protecting the civilians and not creating a humanitarian crisis,” Kalin told reporters.

President Tayyip Erdogan will hold talks in Russia on Monday with President Vladimir Putin to discuss the Syrian crisis, 10 days after similar talks in Tehran, Turkish and Russian officials said.

Despite the deadlock at the Iran meeting, calm has largely prevailed in northwest Syria this week following a wave of air strikes which killed several dozen people and generated speculation of an imminent ground offensive.

A pro-Assad source in Syria said: “There is patience and repositioning currently. The operation is not cancelled, but we have time.”

A second source, an official in the regional alliance that supports Assad, said there was a “political tug of war” over Idlib, accompanied by air strikes on militants from Tahrir al-Sham.

Two rebel sources in the northwest said some government forces have been observed withdrawing from frontlines in the Hama region, which adjoins Idlib, this week.

“It appears that the Russians and the Assad regime have temporarily looked the other way,” said one of the sources, Colonel Mustafa Bakour, a commander in the Jaish al-Ezza rebel group. He added that several hundred pro-Assad forces had withdrawn from frontlines in the northern Hama countryside.

Lavrov, who was speaking in Berlin, was cited as saying that the Russian air force would strike what he called terrorist weapons-making facilities as and when it found out about them, but would also encourage local reconciliation deals.

Kalin said it was too soon to talk about humanitarian corridors until attacks in Idlib were halted.

Putin also discussed the situation Idlib with members of Russia’s Security Council on Friday, telling them he was concerned by militant activity there, the RIA news agency cited the Kremlin as saying.

Have a staycation in ‘superlative’ UK, PM Johnson says

China trades sanctions with U.S. in row over Uighur Muslims