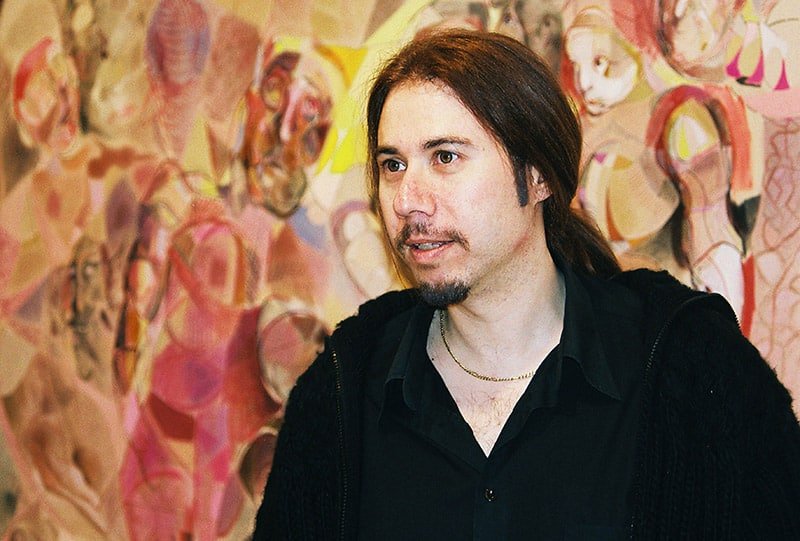 Where do you live?
I live deep inside the transformative world of art, interpreting reflections of life, and painting my own nature on infinite canvasses. Sometimes, in the quiet of the night, as I work, my two companions, the mystical cats Murka and Stroodel, enter the room and then all of the sudden the place I live and paint turns real.

Best childhood memory?
The Ancient Epidaurus Theatre. I was about seven years old. We stayed for the entire duration of the festival. We lived in a village house with a bunch of actors and we spent afternoons and evenings watching rehearsals and performances. There was this director which used to take me and my sister by the hand and take us into the theatre as we were not yet 12 years old and thus not allowed to go in. Being introduced to ancient drama like that, at that very early age, was a mind-blowing experience.

Most frequented restaurant and absolute favourite dish? What food would you really turn your nose up to?
Spontini, Via Gaspare, Milan, for the best pizza you could ever have. Also, I’d never miss the opportunity for a pie at Luini’s, a street food place close to Duomo; the Thai Food place just off the pier in Limassol, and Karavitis, in Athens, for amazing fava and pork souvlaki. Don’t recall ever turning my nose up to a certain food.

What did you have for breakfast?
Oat cakes topped with cream cheese and fresh dates. I washed it down with diet coke.

Would you class yourself as a day or night person? What’s your idea of the perfect night/day out?
Definitely a night person. I feel I work better during the night, but if I were to have a perfect day outing that would include a visit to art galleries, spending lazy time reading and sipping frape coffee, and meeting friends for lunch.

Best book ever read?
The Divine Comedy by Dante. The first time I read it it completely knocked me sideways. Especially the part about Dante and Virgil ascending to Purgatory Mountain which produces such a powerfully glyptic imagery that I felt I was inside a painting.

Favourite film of all time?
Paprika, Satoshi Kon’s anime movie, because its underlying idea of sameness between dream and reality had a liberating effect on me that went far beyond the movie’s metaphysical bent.

Favourite holiday destination? What’s your dream trip?
Favourite destination is always Italy, especially discovering Sienna off the beaten track, walking the small streets for hours and feeling enwrapped in its medieval atmosphere. I always find inspiration in places where time seems to have stood still. I am metaphysically drawn to the mystical temples in Angkor, which are often manifested in my work, so Angkor would definitely be a dream trip.

What music are you listening to in the car at the moment?
I can’t stop listening to Shakuhachi flute music. The sound is compellingly mystical.

What is always in your fridge?
Diet coke

Dream house: rural retreat or urban dwelling? Where would it be, what would it be like and why?
Both, I guess. A London flat, where I would get immersed in the city’s bustle and culture, and a house with big rooms on a hill in Tuscany where I would live and paint in reclusion, inspired by the sprawling hills and the vastness of nature.

If you could pick anyone at all (alive or dead) to go out for the evening with, who would it be?
Hieronymus Bosch, the Dutch Renaissance painter, for a discussion on the indecipherable language and enigma of art.

If the world is ending in 24 hours what would you do?
I guess there would be no point in doing anything else except having a nice meal. Perhaps a roast dinner with stuffing and yorkshire puddings, the specialty of my aunt Angela. For a last dessert I would go to Rome’s piazza Navona for gellato. Perhaps then I would feel brave enough to confront mortality.

What is your greatest fear?
Not being able to paint

Tell me a joke
I really don’t know any jokes but I read recently that Michaelangelo did a drawing of a Madonna and child and next to it he wrote a parody of love poem, which began: ‘You have a face sweeter than boiled grape juice, and a snail seems to have passed over it’. I thought it was hilarious. There is a surreal comicality about the whole thing.