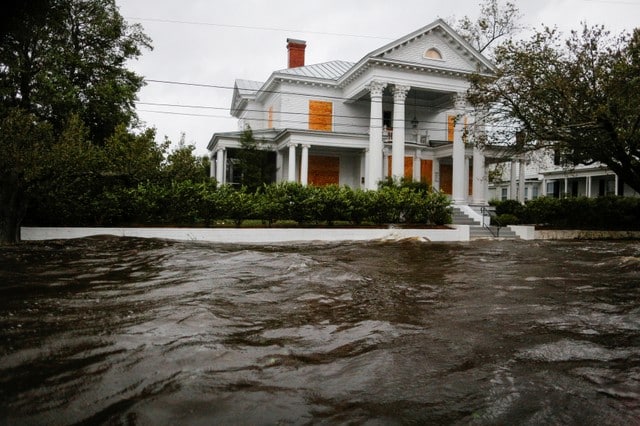 Water from the Neuse river floods houses during the passing of Hurricane Florence in the town of New Bern, North Carolina, U.S., September 14, 2018. REUTERS/Eduardo Munoz

“This system is unloading epic amounts of rainfall, in some places measured in feet and not inches,” North Carolina Governor Roy Cooper told a news briefing about a storm that forecasters said was 300 miles (480 km) wide.

Florence diminished from hurricane strength as it came ashore on Friday, but the large storm’s slow progress across the two states could leave much of the region under water in the coming days, according to forecasters. Along coastal communities, people trapped in homes by relentless flood waters awaited rescue, and tens of thousands hunkered down in shelters after fleeing their homes as the storm approached.

In Wilmington, a city of about 120,000 people on North Carolina’s Atlantic coastline along the Cape Fear River that is home to historic mansions and even a decommissioned World War Two-era battleship, streets were strewn with downed tree limbs and carpeted with leaves and other debris. Electricity remained out for much of the city, with power lines lying across many roads like wet strands of spaghetti.

“The fact that there haven’t been more deaths and damage is amazing and a blessing,” said Rebekah Roth, walking around Wilmington’s Winoca Terrace neighborhood on Saturday.

The National Hurricane Center said the storm would dump as much as 30 to 40 inches (76-102 cm) of rain on the southeastern coast of North Carolina and part of northeastern South Carolina, as well as up to 10 inches (25 cm) in southwestern Virginia.

At 11 a.m. EDT (1200 GMT), the hurricane centre said Florence had maximum sustained winds near 45 miles per hour (75 km per hour) and continued to produce catastrophic flooding in the Carolinas. It said it was located about 40 miles (65 km) west of Myrtle Beach, South Carolina, and forecasters predicted a slow westward march.

Cooper said many people in his state who may think the storm has missed them have not yet seen its actual threat to their regions, advising residents inland that “rivers will rise days after the rain has stopped,” reaching their highest level days from now. He said five deaths were confirmed from the storm and “several others are under investigation.”

“Please be safe and be smart and use your common sense,” Cooper added. On Thursday,Florence was a Category 3 hurricane on the five-step Saffir-Simpson scale with 120-mph winds (193 km). It was downgraded to Category 1 before coming ashore on Friday near Wrightsville Beach close to Wilmington, North Carolina. The hurricane center downgraded Florence to a tropical storm later in the day.

About 10 million people could be affected by the storm.

A mother and baby were killed when a tree fell on their home in Wilmington. The child’s injured father was hospitalised. In Pender County, a woman died of a heart attack. Paramedics trying to reach her were blocked by debris.

Two people died in Lenoir County. A 78-year-old man was electrocuted attempting to connect extension cords while another man died when he was blown down by high winds while checking on his hunting dogs, a county spokesman said.

In New Bern, at the confluence of the Neuse and Trent rivers in North Carolina, the storm surge overwhelmed the town of 30,000.

Officials in New Bern, which dates to the early 18th century, said more than 100 people were rescued from floods and the downtown area was under water by Friday afternoon. A town spokesman said between 60 and 75 people were awaiting rescue on Saturday.

New Bern’s mayor said 4,200 homes were damaged in the city.

Some local residents described a harrowing retreat as the storm hit early on Friday.

“It was pitch black and I was just scared out of my mind,” said Tracy Singleton, who with her family later drove through torrential rain and high winds from her home near New Bern to a hotel some nearly 80 miles (130 km) away.

Authorities in North Carolina said nearly 814,000 customers were without power. The figure for South Carolina was 170,000.

More than 22,600 people in North Carolina were housed in 150 shelters statewide, including schools, churches and Wake Forest University’s basketball arena. In South Carolina there were 7,000 people staying in shelters.

The White House on Saturday said President Donald Trump had approved making federal funding available in some counties. Trump, who spoke with state and local officials on Friday, plans a visit to the region next week.

Cyta unions will take measures if privatisation back on the table