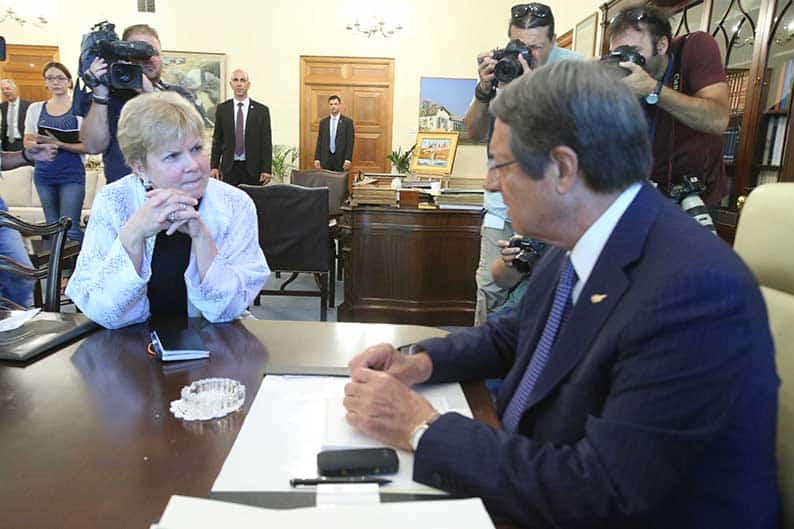 Alithia joked that Jane Holl Lute, the UN envoy, has tracked down the missing minutes of the July 4, 2017 meeting in Crans-Montana

THE UN envoy, Jane Holl Lute, was very straightforward when she recently posed the following question to Messrs Anastasiades and Akinci: “The negotiations at Crans Montana collapsed. What has changed since then, which would support the contention that a new attempt would have a reasonable chance of succeeding?”

I do not know the response she got from those to whom the question was addressed. However, I fear that the response of the Greek Cypriot community to the question of Mrs Lute was not sufficiently focused and crispy, a fact that perfectly suits Turkey, which has succeeded to shift the main burden of the responsibility for the Crans Montana failure onto the Greek side irrespective of the fact that the Secretary-General of the United Nations kept – for obvious reasons – an equal distance between the two sides.

The negotiating error of the Greek side was the latter’s focusing on petty details such as the issue of whether the retirement – after a pre-agreed period of time – of a small military contingent comprising 650 Turkish soldiers would be subject to a sun-set clause or to a decision that would then be taken by reference to the experience gained in the intervening period.

The persistence of the Greek side on such trivial details, gave the impression to third parties that either the Greek side was lacking the ability to comprehend the risks nesting in a deadlock being reached or that the Greek side, having made the choice to go for the partition of Cyprus, was merely aiming at undermining the reunification of Cyprus on a federated basis.

These impressions are not correct because the overwhelming majority of Cypriots (Greek Cypriots as well as Turkish Cypriots) eagerly long for the reunification of Cyprus, subject to the resolution of three key problems.

The first one is the need to sever the political umbilical cord which connects Cyprus with Turkey and Greece.  The need for this is readily evident. The Greek Cypriots are fully justified in not wishing to set up a federated state with the Greek Cypriots on one side and effectively Turkey itself on the other side. Such an arrangement is also unacceptable to the European Union.  Of course, the Turkish Cypriots have similar concerns with respect to the political links of Greek Cypriots to Greece.

The second concern is the need to secure an adequate level of consistency and continuity at the level of the highest office of the State.  It is self-evident that an arrangement which embodies a risk of leading to the application of continuously changing and possibly conflicting policies will inevitably lead to in-governance.

It is, therefore, clear that the “rotating” presidents would have to have common political objectives and a common political action plan (i.e. they must stand on a common political platform), thus ensuring that the rotating presidency reflects the political equality of the two Cypriot communities (and not the power of the one community to overturn and undermine the work of the other community).  Admittedly, a joint ballot paper does not annul the need for some form of electoral factoring.

The third, similarly self-evident need is the securing of the safety of all the citizens of the federated state, an objective that can be easily attained within the framework of the European Union.  This prospect is positively viewed by both Greek and Turkish Cypriots.

It follows that at this last hour, the Greek Cypriot side must transmit a simple, loud and unambiguous message to the United Nations:  The Greek Cypriots accept the framework for the solution of the Cyprus problem that has been formulated by the Secretary General of the United Nations, while noting the risks (and the need to confront these risks) that are certain to pose a serious threat to the federated state, in the event that they are not dealt with.  These are (a) the failure to sever the political umbilical cord which connects Cyprus with the “motherlands” and (b) the failure to elect the rotating presidents on the basis of an electorally weighted, common political platform.  A clear, no-beating-around-the-bush message!

Insider Trump resisters are not heroes

People and power before and after Brexit