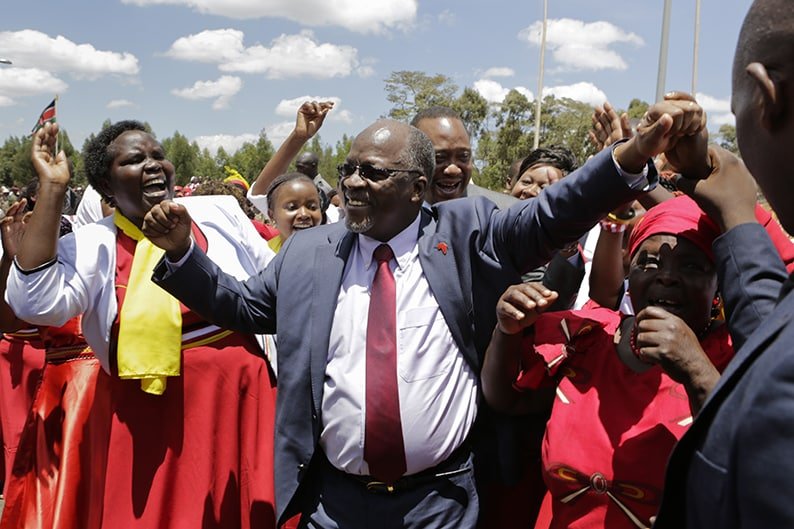 I was one of five children, so I am in an invidious position when I write about population growth. That was quite normal at the time where I grew up, but I and my brothers and sisters have had a total of only ten children, so we’re down to replacement level in this generation. This is not happening in Tanzania.

“Women can now throw away their contraceptives,” said Tanzania’s President John Magufuli last Sunday. Secondary education is now free in the East African country, he pointed out, so children are no longer such a major expense. Tanzania needs more people, and women who don’t have more babies are just lazy.

“They do not want to work hard to feed a large family, and that is why they opt for birth control and end up with one or two children only,” Magufuli continued. “I have travelled in Europe and elsewhere and have seen the harmful effects of birth control.”

This is not really a problem in Tanzania, where the average woman has more than five children. The population has grown at a steady three per cent for decades, and since independence in 1961 it has increased sixfold, from 10 million to 60 million. There is no sign of the birth-rate dropping, and the country is on course for 100 million in less than 20 years.

Yet President Magufuli thinks women should throw away their contraceptives because the country needs more people. He is not alone in this conviction. President Yoweri Museveni of Uganda (which has about the same birth-rate as Tanzania) once told me that his country could easily feed 100 million people. He called the country’s population explosion “a great resource”.

Uganda’s population at independence in 1962 was just seven million people. It’s now 45 million, and will reach that 100 million target in about 30 years – and there is no reason to believe that it will stop there. Uganda’s birth-rate has not dropped in decades either.

The end-of century predictions for these countries if birth rates gradually drop towards replacement level, as they did in Asia and Latin America in the past 50 years, is around 300 million each. But if the birth rates don’t drop in future decades (as they have not dropped in past decades), then these two countries alone will have a billion people in 2100. That’s a very bad idea.

Tanzania and Uganda together have about twice the area of France, which has only 65 million people. They would, with a billion people, be about eight times more densely populated than France – and unlike France, the great majority of their people would still be poor. The long-term economic growth rate in both countries is about three per cent and their population growth rate is exactly the same, so most people stay poor.

And still John Magufuli wants to get the birth rate up. He presumably believes that a bigger population makes a country stronger, but if that were true Tanzania would already be as powerful as France. Five or ten times its current population will make it weaker, not stronger. It will also ruin the environment and leave a lot of people hungry

Magufuli has won popularity throughout East Africa with his flamboyant campaign against corruption. He is also a thin-skinned authoritarian who had banned street protests, closed down two radio stations for “sedition”, and brought charges against at least ten people for “insulting” him on social media platforms, but a recent opinion poll in Tanzania gave him 96 per cent support.

Hardly anybody in Tanzania sees curbing population growth as a priority, and it’s certainly not a vote-winner. Indeed, this is true for sub-Saharan Africa as a whole, and those who point out that it really is a problem that could ruin the continent’s future are frequently accused of neo-colonial or racist attitudes. But there are a few bright spots, and one of them is on the other side of Africa, in Ghana.

Ghana’s population was five million at independence in 1957; now it’s 30 million. But with great effort it has now got its ‘total fertility’ down to four children per woman, and if the birth rate continues to fall the prediction is for ‘only’ 73 million people at the end of the century. Dr Leticia Adelaide Appiah thinks this is still too many.

Dr Appiah is the Executive Director of Ghana’s National Population Council, and a very brave woman. She has proposed that women should be restricted to having three children, and denied access to free government services if they exceed that number. It’s a long way short of China’s one-child-per-family policy (now abandoned), but at least it addresses the problem.

She has faced a storm of criticism for her proposal (almost all of it from men), but she has stood her ground. There is little prospect that Ghana will actually adopt such a policy in the immediate future, but Africa needs more women like her. Urgently.

Going where no other columnist dares

Insider Trump resisters are not heroes