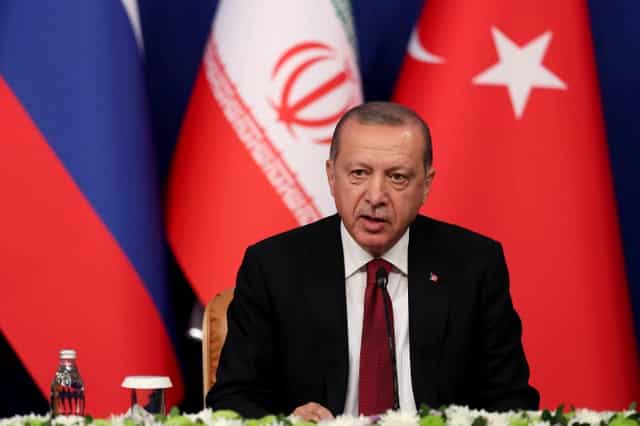 Turkey will not create bases in the north of Cyprus but will increase the troops stationed there, Turkish President Recep Tayyip Erdogan has said.

He was speaking to members of the press following his return from a visit to Azerbaijan over the weekend.

Media reports last month said that Turkey was planning to establish a sovereign naval base in the north of the island, and that a proposal had been submitted to the ‘foreign ministry’ there for the establishment of the base.

Erdogan said there was no need for such a thing, as it is a matter of minutes to reach the Eastern Mediterranean region from Turkey.

“For us it is a short distance,” Erdogan said, adding that for that reason the creation of a base was not necessary.

He also said that this was not the case for Greece, which is further away.

Erdogan however said that there was also the psychological aspect and that if such a need arises, Turkey could establish a base in the north because their presence there was important.

The Turkish president said however that they are obliged to be powerful as regards equipment.

He also said that if the Greek Cypriot side “had listened” to Turkey, the whole Cyprus issue would have been resolved with the 2004 UN (Annan) peace plan.

Erdogan said that Turkey had accepted everything as regards the Annan plan but that the Greek Cypriots sold out.

“What did they promise at the referendum and what did they do? We said yes, they said no, they admitted them into the EU and they left us out,” Erdogan said.

He said that from now on, Turkey would apply the “recipe” it had announced as regards the Eastern Mediterranean.

Following the latest inconclusive round of talks for the settlement of the Cyprus problem, Turkey had announced it would seek another way on the Cyprus issue outside the parameters of the UN.

According to Turkish Cypriot media, Turkey, which is getting ready to make its appearance in Eastern Mediterranean in autumn with the ‘Fatih’ drill ship, is keeping its naval forces in readiness in case of creation of a fait accompli in the region. Reports said that many Turkish war ships are patrolling the Eastern Mediterranean. The Turkish Armed Forces (TAF) published recently photos on their Instagram account from drills of the country’s war ships.

Ayia Napa mayor is ‘married to the resort’