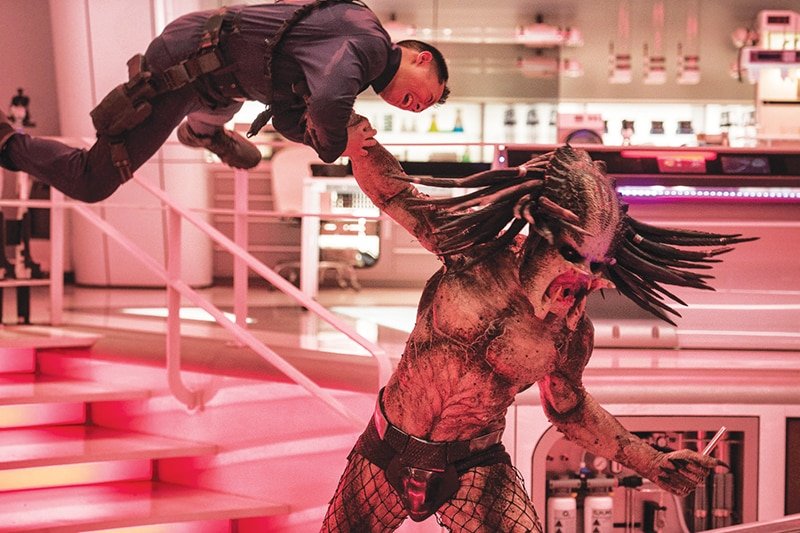 A Predator, as movie fans have known since 1987, is an alien creature that kills people for sport – though that’s actually not a very accurate description of a predator (it should really be killing for survival, not sport), as gets pointed out more than once in this lavishly – and laddishly – entertaining reboot; trust Shane Black to muddy a popular franchise with smart-ass semantics. Black (writer-director, most recently, of the much-underrated The Nice Guys) has the most freewheeling sense of humour in blockbuster filmmaking, neck-and-neck with James Gunn of Guardians of the Galaxy. His films aren’t especially visual – his main contribution as director is to make sure his scripts aren’t diluted – but who cares, when the jokes land so gratifyingly.

And the action? That’s not bad either, though the violence is self-consciously splattery – eyes impaled, heads split open, bodies sheared in two, etc – and the film is a touch overlong, capped by a drawn-out, sequel-enabling ending. Jokes don’t belong in a Predator movie, of course – fans of the 1987 original would be outraged by the thought of a spoof – and The Predator takes its job seriously, adding a few welcome tweaks like an autistic kid (11-year-old Jacob Tremblay) who’s also the son of heroic-but-troubled soldier Quinn McKenna (Boyd Holbrook). “You feel like a stranger on your own planet, don’t you?” Quinn is asked at one point – and the kid also adds to this theme of alien-ness and alienation, though he also goes out trick-or-treating with an actual Predator helmet as a Halloween costume. It’ll end in tears, or at least a ginormous explosion.

There’s more than one Predator now (they talk in Predator-ese, with Greek subtitles), including a “space dog” who turns out to be semi-friendly – but the film’s glory lies in its heroes, not its monsters. Like a more profane version of The Expendables (speaking of 80s throwbacks), The Predator flanks Quinn with a quintet of unreconstructed tough guys known as ‘Group 2’, whose reactions to the prospect of doing battle with the alien range from macho glee to too-cool indifference. One of the group has Tourette’s, another is a Bible-basher and probable virgin (a lady scientist, played by Olivia Munn, also enters the picture). Yet another is a Brit, introducing himself with the line “Entropy: that’s my game”, yet another a cackling comedian with a line in tasteless yo-mama jokes: “If your mum’s vagina was a video game, it’d be rated ‘E’ for Everyone!”

The film is a gift for your inner 14-year-old boy (even though the script was written by two men in their late 50s), blending ultra-violence and political incorrectness. One guy calls another ‘retarded’ – uh-oh, the r-word – and is duly rebuked: “Have a little sensitivity, man! [indicating Quinn] His son’s retarded!”. The language is salty. The lady scientist gets manhandled. Wonder Woman this is not. Yet The Predator comes across as knowing rather than crass, a film with a fine awareness of doomed, self-destructive machismo and its own status as a needless reboot – and Black is such a daredevil writer, grabbing any weird idea that takes his fancy. Autism is touted as the next stage in human development. There’s a passing mention of climate change that’s a little shocking in its casual pessimism. Future generations (if any) will view 2018 as a time when humanity made films on the clear assumption that its days were numbered.

Enough blather; what about the plot? It’s a little muddled, to be honest, with the Predators now hybrid creatures carrying human DNA (as well as DNA from the top species in each of the planets they’ve visited); there’s also some business with a pellet that makes you invisible, swallowed by Quinn (for safekeeping) in a glass of tequila. To be honest, I didn’t really care. The Predators are amusing beasties with bright-green blood and twitching insect mandibles, and the chief Predator is – as the film might put it – a major asshole, using a severed human arm for a thumbs-up and giving our heroes a seven-minute head start before proceeding to butcher them. “That’s the thing that killed my men,” says a CO. “Yeah, they do that,” comes the blithe reply. Like I said, knowing.

It’s a dirty little secret that none of the five previous films in the Predator universe (no, not even the original) were all that great. The Predator isn’t great either – but it’s made by a card-carrying smart-aleck, which at least makes it entertaining. “Been a long time since I held a gun in my hand,” muses one of the guys. “What’s it feel like?” asks another. “Like a gun!” comes the snarky punchline. Maybe there’s a touch of Predator as God, a higher species primed to take over from our weary, self-destructive species; maybe not. Higher meanings pale into insignificance when creatures are exploding in green splatter and our heroes are debating the correct use of ‘ostensibly’ – or indeed ‘predator’. Harvey Weinstein cameo in the sequel, Mr. Black?

‘State not looking to take vindictive measures against teachers’ (Updated)

Anastasiades and Tsipras meet ahead of expected Cyprus developments (Update 2)