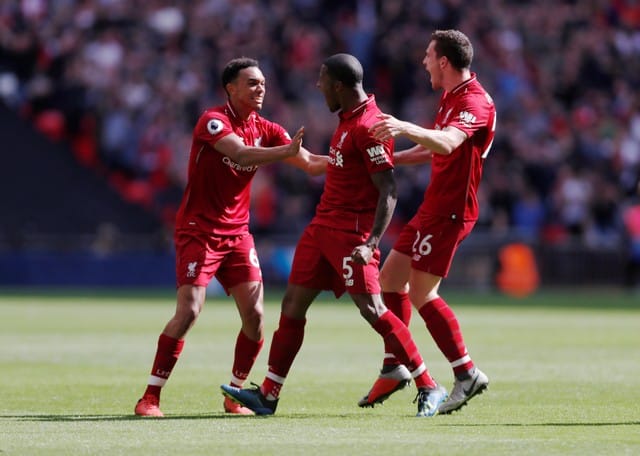 Leaders Liverpool and Chelsea both maintained their 100 percent records while Manchester City kept within two points of the top with a 3-0 victory over promoted Fulham. Here are talking points from the weekend’s Premier League action.

Jurgen Klopp’s side have five wins out of five but none were quite as significant as Saturday’s 2-1 victory over Tottenham Hotspur at Wembley – a statement win that suggests Liverpool could push Manchester City all the way in the title race.

This time last year, the focus of critics was on Liverpool’s defensive frailty but the back four look as solid as any in the league at the moment with Joe Gomez striking up an excellent partnership with Virgil van Dijk.

Liverpool’s start is their best since 1990 and while Klopp isn’t interested in title talk but he hit the nail on the head with his post-match comments.

Brilliant Bernardo showing his worth

Manchester City’s Portuguese winger Bernardo Silva was hardly a peripheral figure in last season’s title winning campaign but nor was he fundamental to it, often used from the bench.

But with Kevin De Bruyne out of action with a knee injury, the 43 million pound ($56.3 million) signing from Monaco has been asked by Pep Guardiola to play in a more central midfield role and he appears to be relishing it.

The 24-year old was outstanding in Saturday’s 3-0 win over Fulham, showcasing his superb control, passing and vision and prompting praise from Guardiola who says the player’s slight build doesn’t reduce his effectiveness in the middle.

“Bernardo can play there because he can fight,” said the Spaniard.

“He is skinny, small but wow… he has that sense of intelligence. You need to be strong and fast and he did it. His natural position is outside but it’s important for us to have players who can play in several positions.”

Everton were horribly toothless for a year after selling striker Romelu Lukaku and with close season signing Richarlison absent from Sunday’s 3-1 home defeat by West Ham United, the paucity of their back-up front players was again exposed.

With the Brazilian suspended, Everton started with Cenk Tosun up front supported by Dominic Calvert-Lewin but both appeared as they do in almost all their performances – just not quite good enough.

Manager Marco Silva replaced the big Turk with 20 minutes to go with Oumar Niasse, another who has never convinced since arriving early in 2016.

Everton fans will be desperate for the return of Richarlison but, wary of how he flew out of the blocks at Watford last year before his impact faded, and with other problems all over the pitch, the high pre-season expectations may yet again end in frustration.

Burnley are in real trouble

Last season’s surprise seventh-placed finish earned Burnley a spot in the Europa League qualifying rounds. However, after three two-legged ties they failed to make it to the group stage and their continental exertions may have influenced their poor start in the Premier League.

After five games, the Clarets are bottom of the league with a just a single point and their fourth straight loss, a 1-0 defeat at Wolverhampton Wanderers, was a woeful performance that raises real concerns for Sean Dyche’s team.

One of the few to emerge with any credit from Sunday’s defeat was goalkeeper Joe Hart, who summed up the team’s performance with some honesty.

“We were miles off. We’ve got no excuses this time. There were no games in mid-week. We’ve got to have a good look at ourselves and go again,” he said.

But the 3-1 win at Everton on Sunday showed that after a tough start, the Hammers have the ability to get themselves well clear of the bottom spots.

The win was badly needed given the next two league fixtures for Pellegrini’s side are Chelsea and Manchester United.