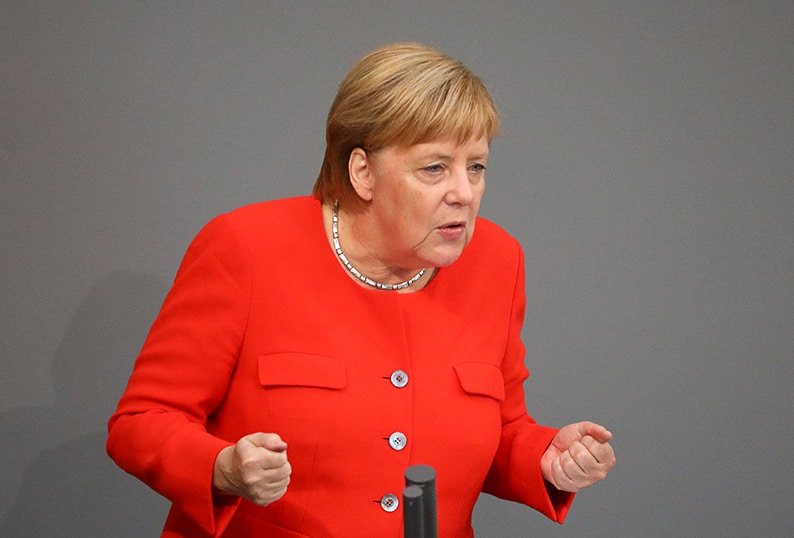 Chancellor Angela Merkel hopes a new immigration law will make it easier for foreign workers to find jobs in Germany, but her push to fill a record number of vacancies risks angering voters who still resent her open-door refugee policy.

With an ageing population and a shrinking workforce, Germany needs greater flexibility to fill more than a million empty positions, business leaders say.

“We will continue to depend on foreign professionals,” Merkel said in the Bundestag last week, defending her immigration plans against criticism from opposition politicians.

“Companies should not be leaving the country because they can’t find staff,” Merkel said, adding that many entrepreneurs were more concerned about hiring skilled workers than getting tax relief.

The new law to be discussed by Merkel and her cabinet later this month aims to attract workers from outside the European Union, although they will need a professional qualification and German language skills when applying for a work visa, according to a paper drawn up by officials.

Government officials see the law, which is welcomed by employers, as a game-changer in the global race for talent since other countries are espousing stricter immigration rules.

But it could anger voters who feel left behind after Merkel’s decision to welcome more than a million refugees in 2015.

An opinion poll this month showed 51 percent felt her government did not take Germans’ concerns about immigration seriously. In eastern Germany, the figure was 66 percent.

There are regional elections next year in the eastern states of Saxony, Brandenburg and Thuringia, where the far-right Alternative for Germany (AfD) is expected to make strong gains at the cost of Merkel’s conservatives and her centre-left coalition partners, the Social Democrats (SPD).

The unprecedented 2015 influx of asylum seekers, mainly from Muslim countries such as Afghanistan, Syria and Iraq, has already caused popular anger and propelled the AfD, which rejects the new immigration law, into the national parliament.

Deep divisions became apparent last month in the eastern city of Chemnitz, scene of violent far-right protests after migrants were blamed for the fatal stabbing of a German man.

Merkel may escape a political backlash if she can convince voters the new law will address specific labour shortages and not increase overall competition in the jobs market.

“If she can credibly make the point that this is about Germany’s economic self-interest, it won’t fuel angst among those who already feel alienated in their own country,” said Gero Neugebauer, a political expert at Berlin’s Free University.

“But if not, then this law will backfire on Merkel, especially taking into account that there are three local elections next year in eastern Germany,” he said.

There are also regional elections next month in Bavaria and Hesse, where the rise of the AfD could make it harder to form coalition governments.

Allowing even more foreigners into the country is a risk for Merkel – even if the labour force in Europe’s biggest economy is forecast to shrink drastically and can only be stabilized with net immigration of 400,000 people every year until 2060. [http://tmsnrt.rs/2edwT7n ]

Due to a prolonged economic upswing, job vacancies have hit a record high of 1.2 million while unemployment is at its lowest since German reunification in 1990, according to the Labour Office. [http://tmsnrt.rs/2edwT7n ]

Labour shortages cost the economy up to 0.9 percentage points of output every year, according to the IW German Economic Institute.

Among companies struggling to find staff is Eyeem, a Berlin start-up that connects millions of photographers globally with agencies and clients through an online platform.

“We’re 100 percent affected by labour shortages,” Eyeem’s personnel chief, Michael Jones, said at the company’s headquarters in Kreuzberg, a multicultural Berlin district that is home to many European immigrants.

“We’re struggling to fill numerous vacancies in areas such as software engineering and sales,” Jones said. In some cases, it can take six months for a foreign candidate to get the green light from immigration authorities.

In one case, Eyeem wants to hire a specialist from Egypt but is still awaiting final confirmation. This makes it hard for Eyeem to plan and for the Egyptian worker to get on with moving to Germany.

Arno Schwalie, chief executive of nursing home operator Korian in Germany, says the number of elderly people needing permanent care will rise by more than a quarter over the next 15 years.

“By then, we might have to deal with a shortage of more than 250,000 workers in the care sector,” Schwalie said. “Qualified immigrants can help close this gap. This is not the only solution, but part of the solution.”

The AfD rejects the new law, saying it will encourage immigration and lead to “wage dumping” at the expense of less-educated locals.

“If you look at the very small wage rises, then you don’t need to be an expert to say that there actually is not a lack of skilled workers,” AfD lawmaker Uwe Witt said.

Merkel stresses that the immigration law is accompanied by a 4 billion euro programme to help Germany’s 800,000 long-term unemployed find work.

While a growing number of the 2015 migrants are finding jobs, the process is slow given the urgency of the need for workers. It takes three to five years for a poorly-educated Syrian or Iraqi to learn German and get a professional qualification.

In addition, the coalition parties disagree over whether refugees should be allowed to shed asylum status if they have found a job and learned German.

The conservatives say this will encourage immigration by asylum seekers without the right skills. The SPD want a more pragmatic approach.

“It’s about preventing a situation where we send back the right people – and then have to painstakingly search for skilled workers abroad,” SPD Labour Minister Hubertus Heil told Reuters.

A compromise floated by officials envisages that only asylum seekers currently in Germany can make the switch, with future refugees excluded.

Germany has become the second favourite destination for immigrants after the United States, attracting more than 1 million in 2016, according to OECD figures.

Of those, more than 600,000 are European Union nationals, who can choose where to live and work in the bloc.

But Germany expects these numbers to fall as the economic upswing in Europe means people can find work at home. In addition, the number of working age people in Europe is declining due to low birth rates.

“We must make full use of all the domestic potential. But this simply won’t be enough, we also need skilled workers from countries outside Europe,” said Ingo Kramer, president of the BDA employers’ association.

For Kramer, Germany’s economic future is at risk if the government fails to adopt a modern immigration law. For Merkel, the enterprise is part of her efforts to secure her legacy.

EU promises to help Cyprus deal with influx of refugees

TOYOTA Triumph in the Rally Turkey