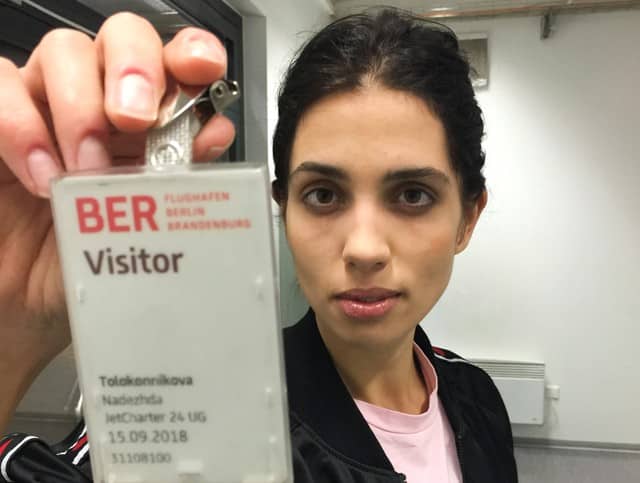 Nadezhda Tolokonnikova, a Pussy Riot member and wife of anti-Kremlin activist Pyotr Verzilov shows her access pass while waiting for the arrival of a special medical plane carrying her husband at Schoenefeld airport in Berlin, Germany September 15, 2018. Picture taken September 15, 2018. Cinemaforpeace/Handout via REUTERS THIS IMAGE HAS BEEN SUPPLIED BY A THIRD PARTY. NO RESALES. NO ARCHIVES

A anti-Kremlin activist who is in Berlin for treatment was probably poisoned with a substance that has affected his nervous system, his doctors said on Tuesday.

Pyotr Verzilov, publisher of a Russian online news outlet and affiliated with the anti-Kremlin band Pussy Riot, temporarily lost his sight, hearing and ability to walk, but is doing better since he arrived in Germany on Saturday.

“It is highly probable that he was poisoned,” Kai-Uwe Eckardt, a doctor at the Charite university hospital in Berlin, told a news conference, adding that there was no other explanation so far for Verzilov’s condition.

He said Verzilov was suffering from anti-cholinergic syndrome, a condition in which certain neurotransmitters get blocked.

But six days after the substance is likely to have been ingested, the chances of identifying it are not high, the doctor said, adding that it could be medicine, a natural substance or plant material.

Although Verzilov is no longer in danger, he still needs intensive medical care.

Verzilov is publisher of Mediazona, an online news outlet that focuses on human rights violations inside Russia’s penal system. He ran on to the pitch during the soccer World Cup final in Moscow in July along with three women affiliated with Pussy Riot.

Pussy Riot came to prominence in 2012 when its members were jailed for staging a protest against Russian President Vladimir Putin in a Russian Orthodox cathedral in Moscow. The group has since become a symbol of anti-Kremlin protest action.