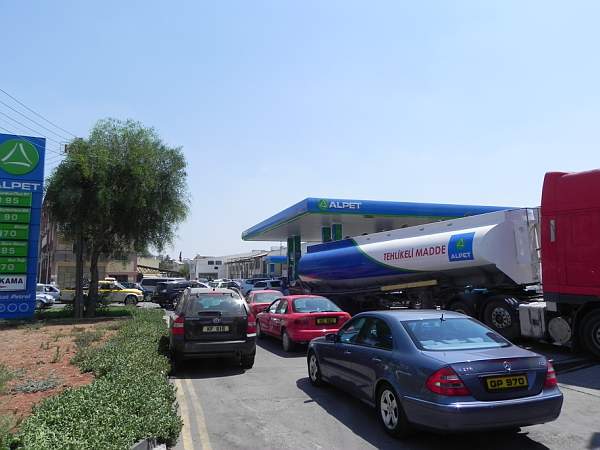 A petrol station in northern Cyprus

The government does not favour a change in its tax policy on fuel because it is low compared with the rest of the EU, Finance Minister Harris Georgiades said on Tuesday.

Speaking before the House energy committee, the minister did not rule out revisiting the matter if the price of fuel rose.

Of the low fuel prices in the north, which are attracting thousands of Greek Cypriots seeking to take advantage of the big difference, the minister said there were differences in many products, including medication and food.

“I do not think we can tackle this problem using taxation tools,” he said, especially when it comes to fuel and other products whose price is affected by the economic crisis in Turkey.

Georgiades said such changes should not affect a state’s fiscal policy, which must be characterised by stability, nor can it be defined by the decisions of the breakaway Turkish Cypriot state in the north.

The island ranks 9th in the EU on unleaded petrol consumption tax with €479. The lowest in the EU is €359.

The government charges 19 per cent VAT on fuel, making Cyprus the third lowest in the EU.

Akel MP Costas Costa said they asked the minister to halt the levying on VAT on fuel sales.

“He refused, citing a European directive, which the government says mandates it. But again, we say that the directive merely allows it [VAT on fuel], it does not mandate it.”

However the lawmaker may have got it wrong. Whereas the 28 EU member states are free to set their standard VAT rates, levying VAT on fuel sales is obligatory. In addition, VAT on vehicle fuel has to be charged at standard country VAT rate, which is Cyprus is set at 19 per cent.

Cyprus, Germany and Romania charge a standard VAT rate of 19 per cent. In the EU, Luxembourg has the lowest VAT rate at 17 per cent, then Malta with 18 per cent.

Hungary has the highest rate at 27 per cent, while Denmark, Croatia and Sweden charge 25 per cent.
The minimum standard VAT rate allowed by the EU is 15 per cent.

The Akel politician re-posed the issue of the ‘rockets and feathers’ phenomenon in gas pump prices.

“How is it possible, when international oil prices had shot up to $140 a barrel, the price of unleaded 95 in Cyprus came to €1.40 a litre, while today when oil prices are at $77, unleaded in Cyprus goes for €1.36? We posed this question to the minister again today, and got no answer.”

Lawmakers were able to extract a promise from Georgiades that the government will examine an incentives package for electric-powered cars or vehicles using liquefied petroleum gas.

The minister also promised to look into the possibility of reducing the annual levy for corporations, which currently stands at €350.

Georgiades reiterated the government’s intention to slash the extraordinary defence levy on interest income from 30 per cent to 17 per cent as of January 1, 2019.