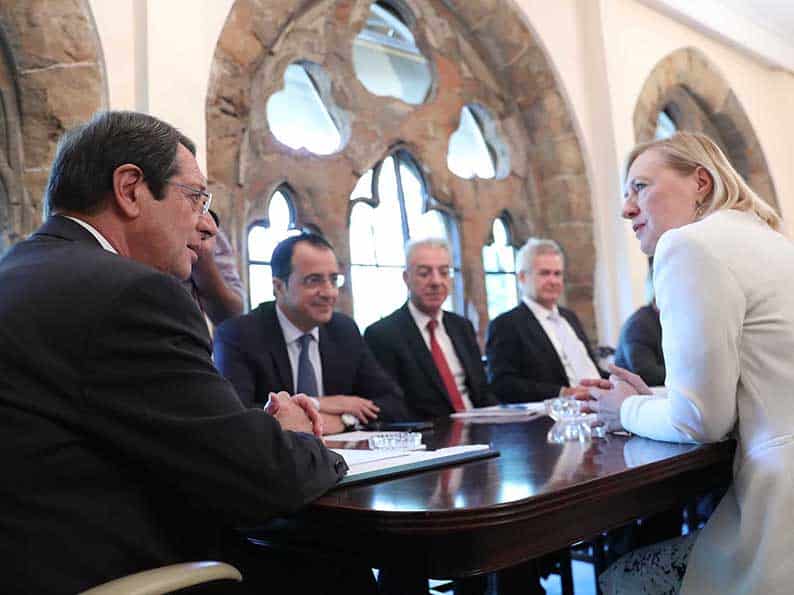 A failure in a new round of Cyprus negotiations would completely change the basis of a dialogue, President Nicos Anastasiades said on Tuesday during an interview with the Cyprus News Agency.

He added that the change would not be because of the Greek Cypriot side’s wish for that to happen, but because the parties involved in the Cyprus talks and the other interested parties, “might have other things on their mind, which would be worse.”

Asked if he believes things have changed since the July 2017 talks in Crans-Montana, the president said: “Judging by the statements made by Turkish officials or by the informal meeting I had with the Turkish Cypriot leader on April 16, I would not say that we have seen the anticipated progress which would encourage the UN Secretary General to undertake a new initiative or to convene a new conference on Cyprus.”

Regarding upcoming meetings he will have New York, where he is set to meet the UNSG on September 28, Anastasiades said he will reaffirm “in the strongest possible way” his determination to engage in a dialogue, while stressing the important role of the Security Council, in both the Cyprus problem and the presence of Unficyp.

Commenting on statements made by Turkish President Tayyip Erdogan, who said he wants to increase the number of troops in the north, Anastasiades said that he was not aware of Ankara’s plans.

“It would not serve any interest,” he president said.

The base was a permanent argument during the talks, he added, saying that the Turkish side was told “it would not benefit anyone”.

Anastasiades said that Turkey is only sixty kilometres away from Cyprus, and that with the modern military technology they are only seconds away.

Earlier, President Anastasiades and the UN Secretary General’s Special Representative in Cyprus Elizabeth Spehar discussed expectations ahead of new developments on the Cyprus issue later this month with the two leaders both set to meet separately with UNSG Antonio Guterres in New York.
Also coming up is a report by Guterres’ envoy Jane Holl Lute on prospects for a positive result from a new round of talks.

After Tuesday’s meeting, Spehar told reporters: “I was very pleased to spend some time with Mr Anastasiades ahead of his upcoming trip. As I usually do at this time of the year I like to touch base with both of the leaders before they go to the General Assembly where both Mr Anastasiades and Mr Akinci will be having bilateral meetings with the Secretary General.”

Spehar described her meeting with Anastasiades as a “good conversation”.

“We talked about his expectations and I also discussed some very important upcoming issues such as the report that will be tabled in the Security Council in the middle of October on the good offices of the Secretary General in Cyprus, the outcome of Mrs Lute’s consultations that will be part of it as well and how this is a very important period going forward as we know, because what is in that report, what is in the next report in January is of great interest to the Council in terms of how they understand the way ahead in the future,” Spehar said.

Government spokesman Prodromos Prodromou said later the Greek Cypriot side wished to utilise the Guterres framework as the parameters for new talks. “We will not settle for the status quo and the occupation of Cyprus,” he said.

“This is what matters to us and the president of the republic is focusing all his efforts to steer things towards a negotiation.”