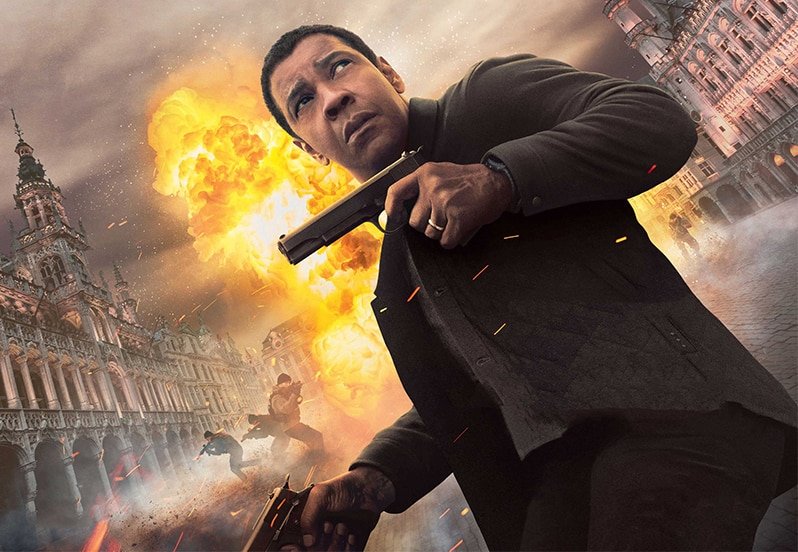 By a strange coincidence, two of the three actors who played poor, bullied Chiron in Moonlight – last year’s surprise Best Picture Oscar winner – appear in supporting roles in this week’s new releases. Trevante Rhodes, who played the adult Chiron, is part of the alien-hunting crew in The Predator while Ashton Sanders, who played the lad in troubled adolescence, gets to support Denzel Washington in the bloated, but surprisingly thoughtful, Equalizer 2. Make your name in the sensitively rendered coming-of-age of a closeted African-American youth, get rewarded by playing the sidekick in a red-blooded action flick with lots of graphic violence. Ah, show business.

Then again, this sequel to 2014’s largely worthless The Equalizer – a film that derailed, in part, by making its hero too much of a superhero – isn’t as far removed from Moonlight as you might expect. Denzel’s never made a sequel in his 40-year career before, and presumably had his reasons for making this one: note that Robert McCall, the eponymous Equalizer, is first spotted on a train in Turkey, disguised as a Muslim and reading Between the World and Me by Ta-Nehisi Coates, a book about being black in America – and a book he, McCall, later gives to Miles (that’s Sanders), a teen who’s being tempted to stray from a promising career as an artist, drawn to a life of violence by local street thugs.

McCall is an ex-CIA assassin – and a killer, but a special kind of killer. We see other killers in the movie, like the one who slays a Brussels couple and makes it look like a murder-suicide. Don’t make a fuss, says this killer as the man pleads for mercy: I was given your name on a piece of paper, that’s all that matters to me. McCall isn’t like that. Like Jigsaw in Saw, he’s the killer as moral arbiter, punishing people who deserve it – he’ll even give them a chance “to stop and reconsider” before lowering the boom – and generally trying to live right. Not only does he read excellent books (Hermann Hesse and Marcel Proust appear in addition to Coates) but he buys them from a small local bookshop rather than Amazon, allowing the shop to stay in business. His friends include an Arab neighbour and a Holocaust survivor – and of course he helps Miles as well, becoming a father figure to the boy and dispensing life-changing wisdom. “‘Man’ ain’t spelled G-U-N, son,” he points out, not inaccurately.

The first Equalizer (based on an 80s TV series) wasn’t just grotesquely violent, it was also hollow: it turned McCall into an invulnerable killing machine, and became an extended episode of ‘Denzel Washington: What a Badass’. The sequel solves – or limits – the problem by limiting McCall’s will to Equalize: it’s understood that he’ll kill or maim anyone he sets a mind to, but it doesn’t happen very often (the film is still violent, but less-principled killers are responsible for most of it). It also doubles down on the first film’s redeeming feature, the bone-deep melancholy Washington does so well.

McCall is now a cabbie (or Lyft driver), and we see him gazing with rueful serenity at the random people in the back of his cab – soldiers and kids and alcoholics, each with their own problems – the look of a man who’s suffered a lot (a dead wife is part of the back-story) and now hopes for nothing. Helping random people is fine, says a friend, but “it’s not going to fill the hole in your heart”. None of this is especially original – the brooding superhero is a hoary cliché, see also Batman – but it lends the film gravitas, especially since Denzel and director Antoine Fuqua do seem genuinely intent on saying something about the Black experience. One scene in particular, when McCall gets in Miles’ face and yells at him about taking his chance while he has it – “You don’t know what death is!” – throbs with a passion you don’t often see in this kind of movie.

The Equalizer 2 is better than expected – but it still comes with problems, mostly inherent in the premise. The switch to all-out action doesn’t work; the climax lacks urgency, despite taking place in the middle of a hurricane (!), maybe because the battle seems a foregone conclusion. But the concept of a moral vigilante, in effect a moral sadist (bound up with the concept of a punitive God, which remains bigger in the States than it is in Europe), is also problematic. The villain is a relativist who reckons there are no good and bad people anymore (there’s no sin, “just shit people do”) – but we also see him with his family, including a young daughter who adorably refers to New Hampshire as ‘New Hamster’. It’s no spoiler to reveal that McCall gets the better of him in the end, but do we really want him dead – or do we worry about what’ll happen to the little ‘New Hamster’ girl? The film seems oblivious to this nuance, which is why it’s finally mediocre. Good and bad are closer than it thinks, and more equalized.

Faneromeni 18 festival ends with a serenade