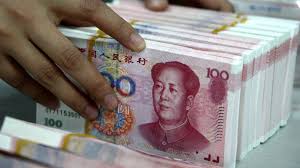 China will not engage in competitive currency devaluations, Premier Li Keqiang stressed, hours after China hit back, with a softer punch than the one landed by the United States, in an escalating tariff war between the world’s largest economies.

Addressing a World Economic Forum event in the port city of Tianjin on Wednesday, Li did not directly mention the trade conflict but he said talk of Beijing deliberately weakening its currency was “groundless.”

“One-way depreciation of the yuan brings more harm than benefits for China,” he said. “China will never go down the road of relying on yuan depreciation to stimulate exports.”

China will not do that to chase “thin profits” and “a few small bucks”.

Li went on to say that the world’s multi-lateral trading system should be upheld, and that unilateral trade actions will not solve any problems.

His remarks gave a lift to the yuan, which has lost about 9 percent of its value since mid-April amid the ongoing trade war.

The United States has so far imposed tariffs on $50 billion of Chinese products to pressure China to make sweeping changes to its trade, technology transfer and high-tech industrial subsidy policies, with China responding with similar scale tariffs.

The new U.S. tariffs will begin on Sept. 24 at 10 percent and will increase to 25 percent by the end of 2018, with Bank of America Merrill Lynch forecasting a 0.5 percentage point decline in Chinese gross domestic product (GDP) growth for 2019 to 6.1 percent.

Oxford Economics said in a note that its baseline forecast for Chinese GDP in 2019 could fall well below 6 percent, and said prospects for near-term easing in tensions were low.

“But the likelihood of de-escalation will rise over time as the increasing economic impact in the U.S. will make the Trump team less combative, and China realises that it will be hard to integrate more into the global economy without some concessions regarding its specific economic model,” the note said.

Investors were relieved that the latest escalation was less severe than some market participants had expected, with Asian stocks rising on Wednesday and U.S. Treasury yields near four-month highs.

China remains unafraid of the “extreme measures” taken by the United States, the People’s Daily newspaper said in a front-page article in its overseas edition on Wednesday.

“To deal with the trade war, what China really should do is to focus on doing its own thing well,” the newspaper, which is published by the ruling Communist Party, said.

“(China) is not worried that the U.S. trade counter measures will raise domestic commodity prices by too much but will instead use it as an opportunity to replace imports, promote localisation or develop export-oriented advanced manufacturing,” it said.

The Global Times tabloid, which is affiliated to the People’s Daily, said the trade war was a chance to pursue greater global recognition of its financial markets and that it could open its A-share market more to listings by Western firms.

Apollon’s Schembri feels Lazio clash will be their litmus test

Kit Harington thanked ‘Game of Thrones’ for his “future family”