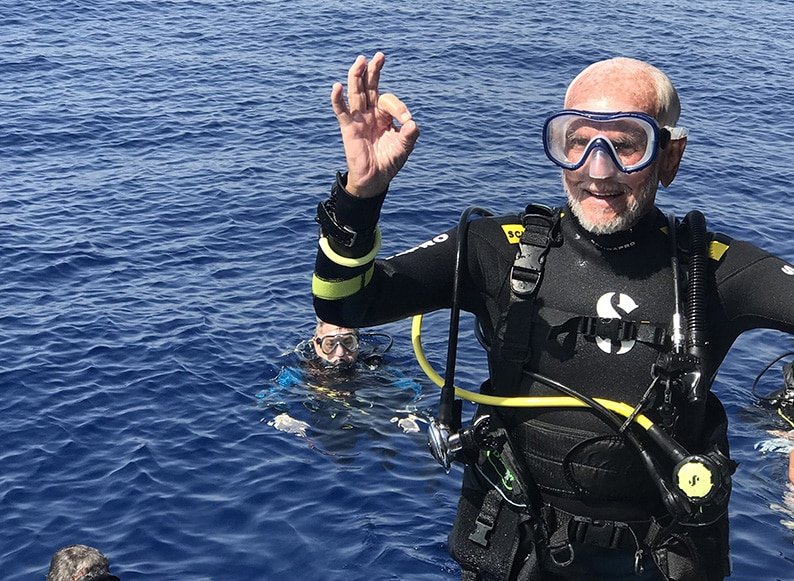 Ray Woolley, 95, has set a new world record as the world’s oldest scuba diver, diving down to the sunken wreck of the Zenobia ferry in Larnaca, on Saturday 1st September, to a maximum depth of 40.5 metres for 44 minutes.

The inspirational 95-year-old told the Cyprus Mail: ”I have just received confirmation from the Guinness Book of World Records that I am still the world’s oldest scuba diver at the age of 95 years 4 days.”

Ray, who celebrated his 95th Birthday on August 28, said it felt ‘fantastic’ to break his own record and hold onto his title.

The nonagenarian, who lives in Limassol, initially claimed the Guinness record title following a similar successful dive on his 94th birthday last year, where he dived to a depth of 38.1 metres for 41 minutes.

As with last year, the entire process was filmed, photographed and documented in line with guidelines approved by Guinness World Records.

He is originally from Port Sunlight on the Wirral Peninsula in the UK, and started swimming at his local swimming baths aged five.

The 95-year-old is a World War II veteran who served in the Royal Navy and ‘SBS Special Force 281’ in the Dodecanese. After the war, he trained as radio engineer and whilst working for the British foreign office was posted to Cyprus in 1964.

Ray said he is getting used to the limelight as he is also appearing in a documentary film about his life.

“I will be at both of these events. They are important to me as I was born in Port Sunlight, and I live in Limassol. I like to see people watching the film and I also enjoy talking about healthy ageing and keeping fit, it’s so important.”

Ray said that his latest dive was only made possible with the help of a group of people including, members of his family, all of the divers that participated in the dive from various clubs and David Turner, the Diving Officer of the WSBA (Western Sovereign Bases Area) Sub Aqua Club at RAF Akrotiri.. He also passed special thanks on to dive buddy Emma Nicholson who flew in from the UK., especially to dive with him.

“I also want to thank the Mayor of Larnaca Andreas Vyras, and the Larnaca Tourist Board.”

More than 40 divers took part in the record-breaking dive which was broadcast worldwide.

The nonagenarian said that it’s a ‘bit premature’ to start thinking about breaking his record next year, but said that if he remains fit and his dive buddies are happy to dive with him, he will do it all again.

However, he said that next year’s dive might take place in Latchi.

“Latchi is the place in Cyprus that I dive most often, so I may do it there,” he said.

Of the future, Ray said he has no plans to give up diving just yet.

On November 11, Ray will again march past the Cenotaph in London on Remembrance Sunday,as he did aged 90, as one of the few remaining World War 2 veterans.