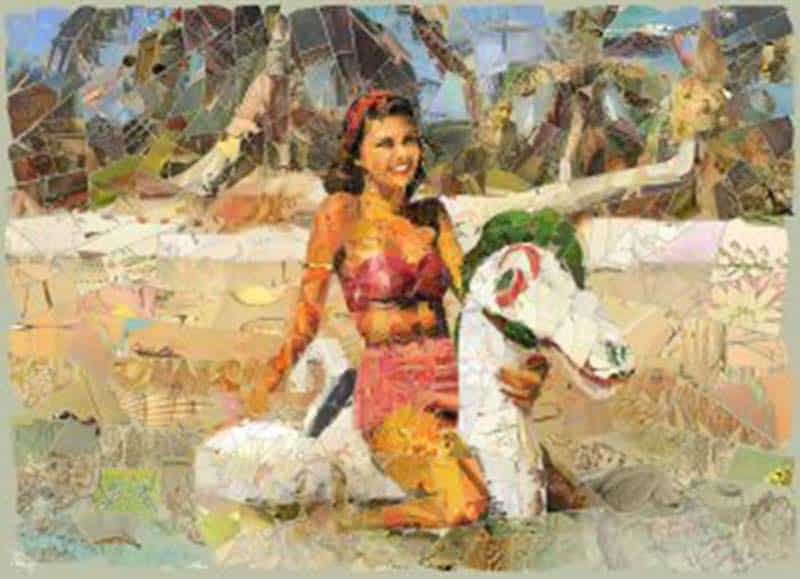 As we we move further into September and we get back into the routine, the art world starts to stir with a new season of exhibitions. The end of the week brings two very different exhibitions that set the standard for the season ahead: Endless Summer by Charis Tsevis at the Almyra Hotel in Paphos and the first solo exhibition by Maria Hassabi at the Point Centre for Contemporary Art in Nicosia.

Some wish that the summer was endless and judging from the art work by Tsevis, he does too. As the title suggests, the theme of the exhibition is a place where there is an everlasting summer. Through his series of mosaics on canvas, the artist attempts to capture moments from a bright and somewhat beautified time. These include stereotypical scenes with sun, sea and joy. Summer is also reflected in old popular magazines and advertisements to stir in the viewer a feeling of nostalgia for a time of innocence.

“In this bright summer comes a series of Aphrodites that identify themselves with various hypostases of the ancient goddess. Sometimes Urania and sometimes Pandemos. They are always multicoloured, made out of retro images of nature and intense colours. They are the colours of the summer in Paphos that dominates all over Cyprus. Yellow, blue, gold, green, yellow, white,” a press release for the exhibition said.

This is his first solo exhibition in Cyprus, where he has been living for the past three years.

Tsevis is a Greek visual designer and artist whose work is known around the world. He has become famous for the development and introduction of his innovative techniques for digital mosaics. His work is used in advertising, publishing and visual communication.

His projects decorate public and private spaces all over the world. They include the giant mural of the Golden Gate Bridge in the Delta Airlines VIP lounge at San Francisco International Airport, the murals in the House of the United States Olympic team in Rio De Janeiro and the mosaics for Nike stores around the world.

The other first solo exhibition of the evening is in Nicosia where Hassabi will showcase an installation featuring a collage of materials derived from her recent performative works, STAGING (2017) and STAGING: Solo #2 (2017). These materials include moving images, photographs, a five-minute duration performance script, a sound score and, on the opening night, a performance by Oisin Monaghan.

According to organisers of the exhibition “these works attempt to be ‘staged’, precisely planned, organised, and arranged in advance, with their choreographic material meticulously crafted – the performers actions, even their gaze, is subject to counts and cues. Yet the physical side-effects of time and labour gradually divulge into their own unrehearseable choreographies. Rather than the detailed gestures, postures and timings, it is the kinesthetic intensities and energies that shape the material of the work, revealing a form that is continuously in progress and always ‘staging’ and ‘re-staging’ itself in an endlessly unfolding manner.”

For the purpose of the exhibition, the live performers are removed. The images from these performances have been digitally manipulated and are presented as objects, displayed on walls and on the floor – in an effort to see what remains once the element of liveness in process is extracted.

Hassabi is a New-York-based artist and choreographer. Her performances and installations are presented worldwide in theatres, museums, galleries, and public spaces.