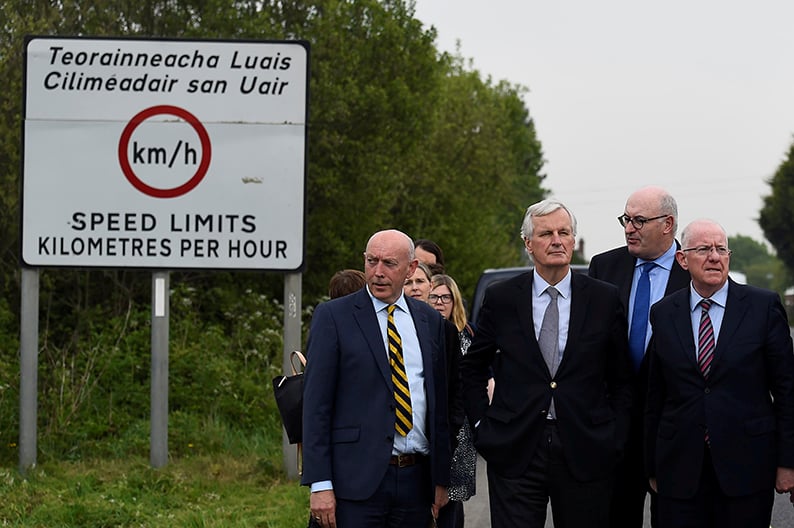 European Union Chief Negotiator for Brexit Michel Barnier accompanied by a delegation of Irish ministers visits the Armagh and County Louth border between Northern Ireland and Ireland May 12, 2017

European Union leaders met in Salzburg, Austria, for an informal summit to discuss migration and Brexit. Below are comments of leaders before and after the meeting on Thursday.

“Everybody shared the view that while there are positive elements in the Chequers proposal, the suggested framework for economic cooperation will not work, not least because it risks undermining the single market.”

“The moment of truth for Brexit negotiations will be the October European Council. In October we expect maximum progress and results in the Brexit talks.”

“I’m still optimistic we can come to a joint position later this year and the Chequers proposal in itself is helpful but its not the outcome.”

“We have made more preparations for a no deal.”

“First of all, I’m not the one who created an Irish government… Second, we have very clear principles regarding the integrity of the single market and regarding precisely the Irish border. It was precise in March and it was endorsed by the 27 members. So, we have to find collectively and we need a UK proposal precisely preserving this backstop in the framework of a withdrawal agreement.”

“I never command speculations. I have sufficient work with reality.”

“I had a very good meeting this morning with Prime Minister May and her team. Time is running short. There’s proposals for another summit in October and then in November. Ireland is a country that obviously wants to avoid a no deal scenario, we want to avoid a no deal Brexit, (but) we are preparing for that, we are hiring extra staff and officials, putting in IT systems, we’re ready for that eventuality should it occur. But I think we need to double our efforts over the next couple of weeks to make sure that we have a deal.”

“That deal of course would involve three elements, so withdrawal agreements providing for the UK to leave with a transition period, a protocol on Ireland and Northern Ireland making sure that under all circumstances there won’t be a hard border on the island of Ireland, and also a joint political declaration outlining what that new relationship is going to look like.”

“Prime Minister May and I have conversations about this all the time, but this is a negotiation between the European Union and United Kingdom, and Ireland is staying at the heart of Europe, we’re staying in the single market in the Euro, we help defend those great projects that have brought enormous prosperity across the continent of Europe. So this ultimately is going to be a new treaty, a new negotiation between the EU and the UK.”

“We have a border already in the sense that there’s a political border and different currencies used in Northern Ireland vs. Ireland, for example, so a political border does exist. What we want to avoid is any new barriers to the movement of goods, any new barriers to trade, any new barriers to the movement of people. Just think of all the people everyday who cross the border to work or study, think of all the businesses who trade across the border, so that’s what we’re trying to engineer in many ways, is a new relationship that at least when it comes to those matters, is very much like the one we have now, but that’s difficult to do.”

“Today I can see that it is necessary to make all the steps because the proposals are not enough in order to have an agreement.”

ON THE PRESENTATION OF BRITISH PM THERESA MAY ON WEDNESDAY

“It was interesting, it was polite, it was not aggressive. She is doing her job.”

“We listened to Teresa May yesterday, I think that she told us the efforts the British government did, and today we listen to Michel Barnier on the different points. I still believe that there’s some difficult points. I fully believe that we will be able to find an agreement.”

“It’s a compromise from both sides, it’s not on one side.”

“You know that, as before, the approaches are very different. But to report something positive, inside the room, away from the hard media statements outside, I think both sides are aware that they will only reach a solution if they move towards each other.”