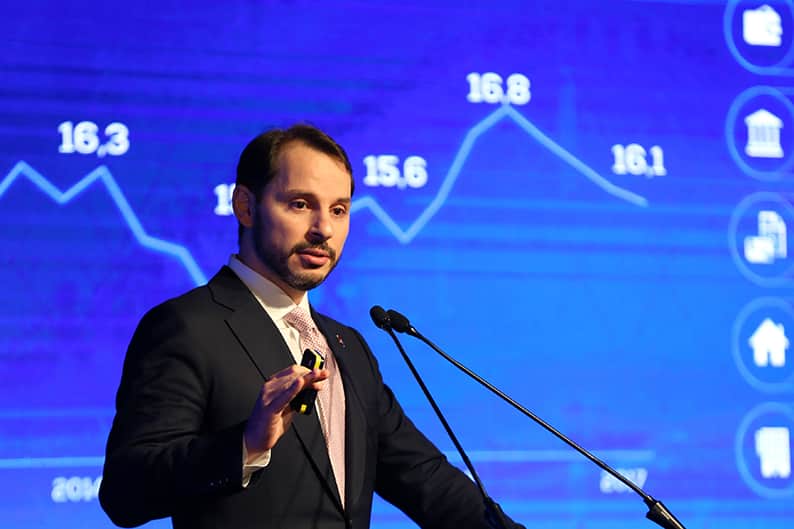 Turkey sharply cut its growth forecasts for this year and next on Thursday, but disappointed investors who had hoped for a plan to help banks and a deeper reduction in the estimates to reflect the fragile state of the economy.

Turkey has seen its lira currency plunge by 40 per cent this year on concerns about President Tayyip Erdogan’s influence over monetary policy and a bitter diplomatic rift with the United States. The turbulence has shaken global financial markets and raised the prospect of a potential banking crisis at home.

Markets had been hoping that Finance Minister Berat Albayrak’s medium-term programme announced on Thursday would signal a clear break from the emphasis on credit-fuelled growth that has characterised Turkey’s rapid expansion over the last decade and a half under Erdogan’s rule.

Albayrak said growth would be 3.8 per cent this year and 2.3 per cent in 2019, both revised down from forecasts of 5.5 per cent. He also did not deliver the big plans for the banking industry that some analysts had been hoping for, particularly, the creation of a “bad bank” vehicle to take over non-performing loans.

Following the presentation, the chairman of Turkey’s BDDK banking watchdog said there would not be a transfer of problem loans to another institution.

“At the moment, the programme is a disappointment. First, when you look at the growth forecast, the current account deficit forecast, they are too ambitious,” said Guillaume Tresca, a senior EM strategist at Credit Agricole.

The lira weakened to 6.3100 by 1219 GMT, from around 6.20 beforehand and a close of 6.2541 on Wednesday. The currency has now erased almost all the gains made since the central bank’s mammoth interest rate hike of 6.25 percentage points last week, underscoring the difficulty policymakers face in putting a floor under the lira and restoring confidence.

Sources told Reuters on Wednesday there was a debate among top government officials about the extent of the growth revisions, highlighting the delicate balance between Erdogan’s long-standing drive for economic expansion and investors’ calls for greater austerity.

“We will see a gradual growth increase from now on. Our main goal is to establish 5 per cent growth from 2021 onwards,” Albayrak told Thursday’s presentation in Istanbul. He did not take questions.

“We will realise the necessary policies and measures to ensure economic hardships are overcome,” he said. “We are aware of the economy’s strong and weak points.”

For financial markets, the biggest concerns remain inflation – which Albayrak forecast would hit 20.8 per cent this year and 15.9 per cent next year – and the banking sector.

Turkey’s banks face a potential deluge of bad debt as the lira sell-off has driven up the cost for companies to service their foreign currency loans. For years Turkish firms borrowed in dollars and euros, drawn by lower interest rates. JPMorgan estimates that the private sector has around $146 billion in external debt maturing in the year to July 2019.

Ratings agencies Moody’s and Fitch have both sounded the alarm about the outlook for banks. Fitch has estimated that banks’ foreign-currency lending stood at around 43 per cent of all loans. But the government has repeatedly said it does not expect problems in the banking sector.

“The lack of ‘burden sharing’ signs in the restructuring of the real sector debt in Minister Albayrak’s speech seemed to have led to a sharp deterioration in sentiment,” Gokce Celik of QNB Finansbank said in a note to clients.

Albayrak said that investment projects for which the tender process has not been finalised will be suspended, a sign that some big-ticket government projects could be put on hold.

Albayrak said Turkey would prioritise investments in pharmaceuticals, energy, and petrochemicals to reduce its current account deficit, which was seen falling to 2.6 per cent of gross domestic product by 2021 from 4.7 per cent seen in 2018.