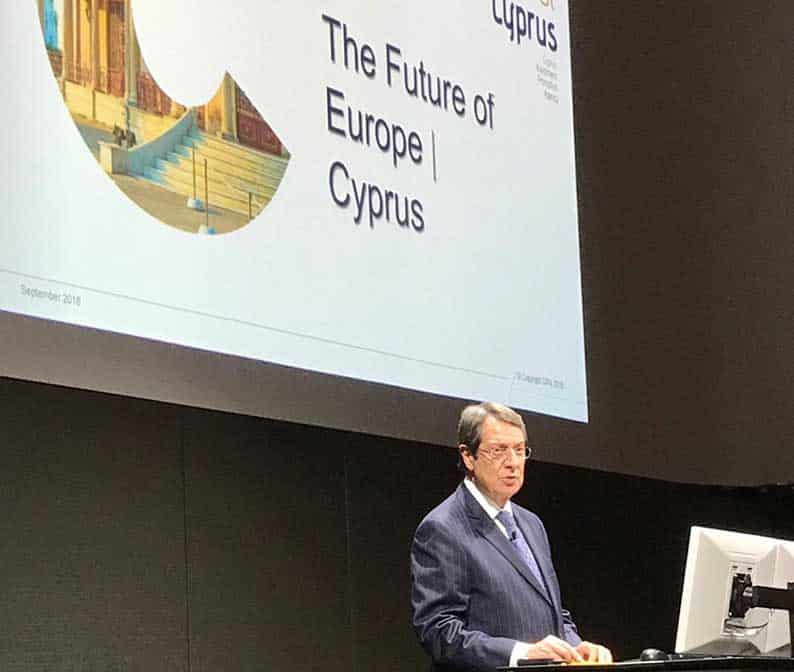 Cyprus is “determined and committed” to working with the UK government to forge even stronger ties with Britain given that EU-Brexit negotiations were entering a critical stage, President Nicos Anastasiades said on Friday.

He was speaking a day after EU leaders said in Salzburg they would push for a Brexit deal next month but warned British Prime Minister Theresa May that if she would not give ground on trade and the Irish border by November they were ready to cope with Britain crashing out.

Anastasiades had also met May in Salzburg where they discussed Brexit and the status British bases in Cyprus in the event of Brexit.

In a speech in London at the Invest Cyprus Forum at Bloomberg’s European HQ on Friday Anastasiades said: “There is no doubt that we are now entering a very critical point as regards the future relation and partnership between the European Union and the United Kingdom.”

He said Cyprus was part of the consultations and the process currently underway and was committed in supporting the dialogue conducted in order to achieve a mutually beneficial future partnership between the EU and UK.

“At the same time, we are determined and committed to work closely with Her Majesty’s government towards ensuring that our two countries forge an even closer and reinforced bilateral relation, building upon our solid foundations of bilateral and multi-dimensional understanding and cooperation,” he added.

In his speech on investment, Anastasiades said Cyprus and the UK, enjoy a solid economic partnership which “we genuinely aspire to move forward”, through exploring the business opportunities that Cyprus has to offer and through exchanging ideas and means of further strengthening economic, trade and investment collaboration.

“Over the decades we have closely and effectively co-operated and established synergies on a wide range of issues at the bilateral, European and international level, including as partners in the Commonwealth and the European Union,” he said.

“At the same time, it is well-known that our economic, business and investment relationship constitutes an integral and fundamental part of our partnership, with the UK being one of Cyprus’ main trading partners for both goods and services.”

Anastasiades said given the large Cypriot community in the UK, as well as the sizeable British community in Cyprus, the number of Cypriots who pursue their studies in the UK and the continuously growing number of Britons who choose Cyprus for their holidays, strong people-to-people contacts had developed which provided a solid base for the further enhancement relations.

He listed Cyprus’ comparative advantages as an attractive investment destination and a highly competitive centre for international business and ongoing reforms, plus the island’s energy plans and the creation of the island’s first casino resort.

“A testament to the above-mentioned are the consecutive upgrades of our economy by international rating agencies, with Cyprus only last week rated to investment grade, after being in the “junk” category seven years ago,” he added.

The challenge now was to keep up the momentum and ensure that Cyprus remained on the path of sustainable growth.

He said the government also aimed to continue with the policy of tax reductions and providing new incentives in order to further boost entrepreneurship and attract new investments, with emphasis placed on innovation and start-ups.

“I am confident that all of you, during the numerous meetings to be held today, and given also your entrepreneurial inventiveness, will identify a number of new joint business initiatives, as well as new areas for future co-operation for advancing our economic, investment, trade, commercial and tourism partnerships,” he told participants.