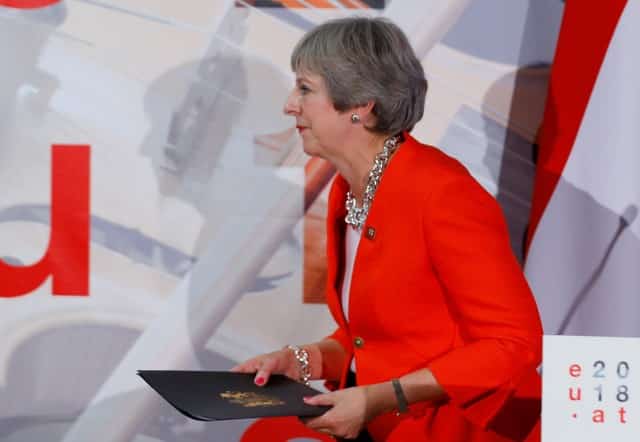 Britain's Prime Minister Theresa May leaves after a news conference after the informal meeting of European Union leaders in Salzburg, Austria

British Prime Minister Theresa May said on Friday the European Union must come up with an alternative to her Brexit proposals, saying talks had reached an impasse after bloc’s leaders had rejected her plans without explaining why.

At a summit in Austria on Thursday, EU leaders said they would push for a Brexit deal next month but rejected May’s “Chequers” plan, saying she need to give ground on trade and arrangements for the UK border with Ireland.

“It’s not acceptable to simply reject the other side’s proposals without a detailed explanation and counter proposals,” May said in a televised statement.

“So we now need to hear from the EU what the real issues are, what their alternative is, so that we can discuss them. Until we do, we cannot make progress.”

May said she could not agree to any deal which treated Northern Ireland differently to the rest of the United Kingdom.

The EU insists that there can be no hard border between the British province and the Irish Republic, with Northern Ireland remaining in the bloc’s customs union or effectively establishing a border in the Irish Sea if no alternative deal is reached.

May cited Britons’ vote in 2016 to leave the EU. “I will not overturn the result of the referendum nor will I break up my country,” she said. “We need serious engagement on resolving the two main problems in the negotiations and we stand ready.”

“We’ve already compromised hugely with the Chequers proposals. We’ve engaged and we want to hear more about what the real critique of it is and we’ve got no other credible alternatives on the table,” Raab told the BBC.

“What we’re not going to do is be salami sliced throughout this negotiation in a typical style that the EU engages in without movement on the other side.”

For the British media, the message from Salzburg was clear.

Newspapers led their front pages with a Reuters picture showing May, dressed in a red jacket, standing apparently aloof and alone from a mass of suited male EU leaders.

Few diplomats expected any breakthrough from the Salzburg summit as the EU has repeatedly made clear that May must rework the Chequers proposals.

The tone of some of their comments, particularly the irony of European Council President Donald Tusk, left May exposed at home as she heads into what is expected to be a tumultuous annual conference of her Conservative Party from Sept. 30.