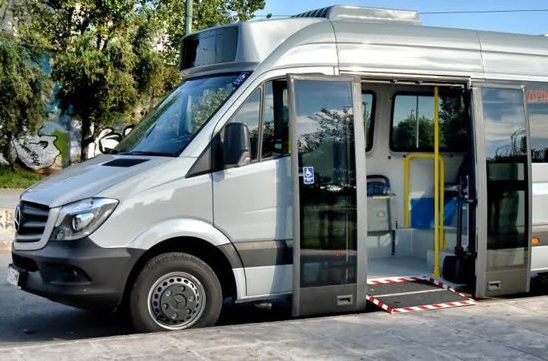 Since it started operating in May 2017, the number of passengers using the Nicosia mini-bus service, which operates in and around the old town, has jumped from 80 people in its first week to 1,200 per week today, the capital’s mayor Constantinos Yiorkadjis said on Friday.

In a written announcement, Yiorkadjis called on residents to make more use of the small buses, saying they were a vital means to combat traffic congestion in the city.

“The municipality has taken the bold decision and has been operating the minibus service in the centre of Nicosia for a year,” he said. “Many will have noticed Nicosia’s small buses, as well as the fact that they travel with few passengers and will reasonably ask why the municipality insists on running the service, especially since it cannot be economically viable.”

In reality, he explained, no public transport network in Cyprus, but also in many other countries, makes money, but the government has a duty to provide low-cost public transport.

In his announcement, he pointed out the widespread dependence on private cars in Cyprus, and many households have as many cars as adult members, he said.

But, the use of cars takes a toll on the environment and the quality of life, creating air pollution, noise pollution, traffic problems and reducing road safety. In addition, it entails significant costs for households, the mayor said.

For these reasons, he added, it was necessary to try to increase the use of public transport, and that is why the municipality insists on keeping the minibus service though it was aware of the fact this was going to be a difficult undertaking.

“However, the tendency to use the small buses is increasing, and this is encouraging,” Yiorkadjis said. “Eighty passengers used them in the first week of operation, by the tenth week 588 passengers, in week 23, around 725, in week 40 the number increased to 839, and now around 1,200 people use them every week.”

He reminded the public that the buses run every 20 minutes and make short stops in the city centre. The two routes operate 16 hours a day. Potential users can find information on where buses currently are and where their nearest bus stations are at  www.nicosiaminibuses.eu.

The statement says the municipality would continue its efforts and run campaigns to increase the use of the bus network.

“We would also like to invite our fellow citizens to use them to make their journey to the city centre easy, fast and affordable.”

The small buses, which were purchased in December 2015 link the historic centre and the city’s modern shopping centre run from 7.30am until 11.50pm every day. Τhe eco-friendly buses follow two routes, both of which start at the old GSP stadium where cars can park for free.

Unlike the bigger buses which can only get to Solomou Square, the 13 mini buses are able to negotiate the narrow roads in the old part of the city.

The buses are fully air-conditioned and have the facilities to transport wheelchair users and strollers. They can transport 21 people, 13 seated and eight standing. Three seats are for disabled persons.

They also have racks for bikes.

The service is available free of charge.

May: Brexit talks at impasse, EU must produce alternatives (Update 2)