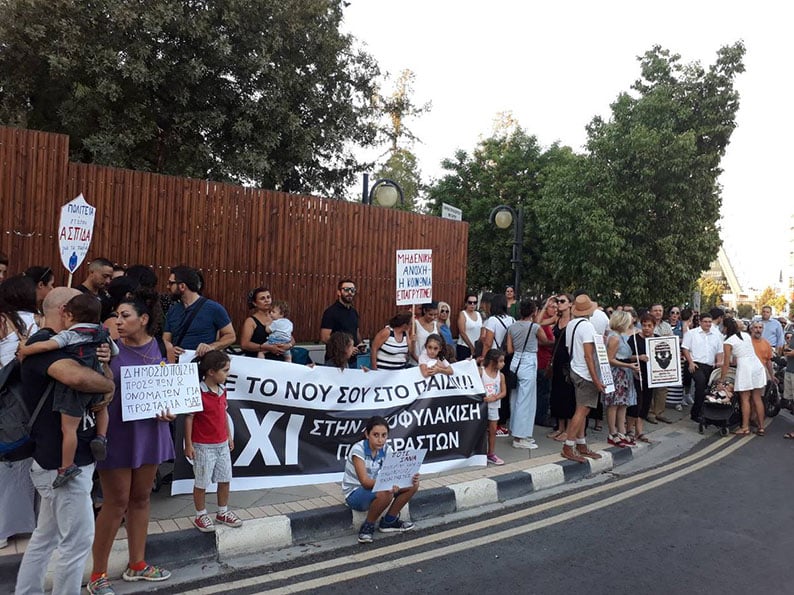 Protesters outside the presidential palace on Friday

Around 40 people of all ages gathered outside the presidential palace on Friday to protest the early release from prison earlier this month of a child molester who benefitted from a wholesale presidential pardon, as the government reiterated its pledge of setting stricter criteria on sentence commutation.

The protest was organised by a Facebook group named Keep an eye on the children! No to the release of paedophiles, formed after news earlier this month that a convicted child molester was released earlier than anticipated due to the presidential pardon and that his victim, now an adult, who lives in the same neighbourhood, was not even informed of this. Her family had found out after hearing the celebrations for the man’s return.

In a knee-jerk reaction to the social backlash, the government on Friday filed a request for court-mandated supervision of the perpetrator.

A representative of the group, Eleni Charalambous, told TVOne that they had decided to organise themselves to push for harsher penalties for those convicted of such offences and to put pressure on the government to act more responsibly in its actions concerning the safety of children.

“We were shocked to hear that a presidential pardon was given to a convicted child molester,” Charalambous said.

She added that they want to send out the message that society would like the state to “stand as a shield protecting our children”.

The head of the president’s office, Petros Demetriou, said afterwards that Nicos Anastasiades was troubled over the matter and reiterated that despite adopting for the first time new criteria for the release of offenders under the pardon system, such a situation had not been avoided.

Demetriou, who met the protesters, said he had conveyed the president’s determination to set stricter criteria immediately as well as a comprehensive policy to support the victims of such acts.

The man had benefitted from a general presidential pardon granted by Anastasiades after his re-election in February this year.

He had been sentenced to three years in jail for molesting his neighbours’ daughter and was due to be released on March 29, 2019.

Our View: Outcry over paedophile’s release is forcing change