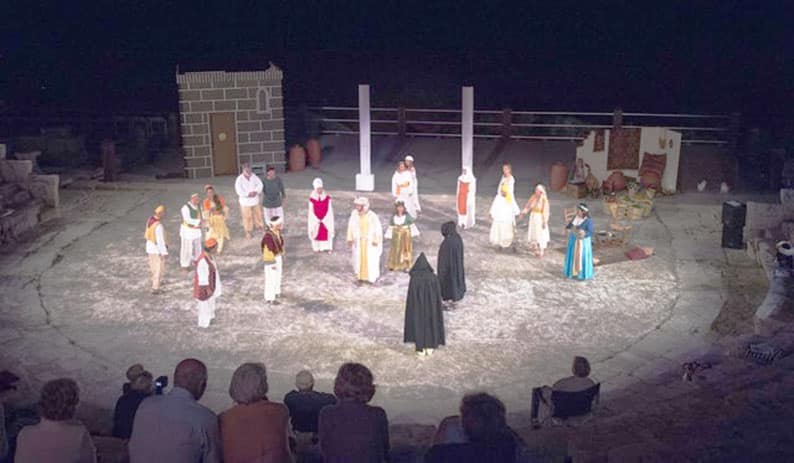 FOR almost 60 consecutive years, there’s been a Shakespeare at Curium. You’ve probably been at least once; taking your kids/significant other/large picnic basket/all of the above along to the stunning Roman amphitheatre to enjoy the long-standing local thespian tradition.

Organised by the PACC (Performance Arts for Cyprus Charities) this annual enactment of the Bard’s greatest plays began in 1962 and has been a seasonal highlight for theatre-goers islandwide ever since.  Through the invasion years, the millennium, the haircut – through good times and bad, the SAC has gone ahead, an unshakeable annual institution! So why, you wonder, did we include that ‘almost’? Well, therein lies quiet a story, which starts, nearly six decades ago, with the then District Officer of Limassol – one Chris Benjamin – and what is probably the Bard’s best-known play…

The idea was to use Curium as a unique setting for A Midsummer Night’s Dream; the monies raised to go to charity. But the cost of staging at the time was quite considerable, and no organisation would (or could) agree to support the proceedings. Until, that is, Maroula Zenonos, the Honorary Secretary for the Committee for Chest Diseases Limassol agreed to donate the necessary 400 pounds, a decision which would echo down the decades. 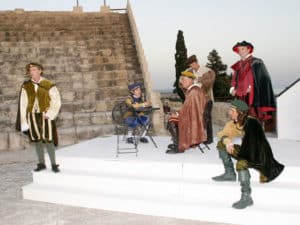 Confounding all expectations, that very first performance raised over 1,000 pounds: money which went straight back into the community. And ever since, every penny from the Shakespeare at Curium (SAC) has gone the same way: to local charities, homes, and those in need all across the island. As well as the Committee for Chest Diseases, Friends for Life, Cardiopathon Paedion, Vagoni Agapis, Funraising, Preventive Paediatrics Limassol, and the Friends’ Hospice in Paphos  – who received an entire minibus! – have all benefited over the years: thousands upon thousands of euros making its way to where it’s really needed.

“A total of over 100,000 euros has been donated to Cyprus charities in the last 10 years alone,” notes Liz Pearce, Treasurer for the PACC. “Producing an annual Shakespeare at Curium has provided an opportunity for our community to give something back. By working hard, rehearsing, and performing at such a high level, we encourage large audiences and every cent of profit we make is donated to charity. It’s a wonderful way to support those less fortunate through local Cyprus charities.”

Since its inception, each and every year has seen the PACC donate thousands of euros to local charities, right up to 2017 and A Comedy of Errors. Chosen due to its previous popularity (when you’ve got 50-plus performances, and only 37-odd plays, repetition is inevitable!) and directed by Colin Garland, Errors saw audiences in their hundreds and gave almost €5000 to local charities; a remarkable triumph on such a small island!

In part, it’s the popularity of the Bard and the stunning location which have contributed to the long-standing success of the SAC. But it’s also the volunteer cast and crew who have made the SAC such a hit for that (almost!) half century…

All nationalities and ages get involved, some choosing to tread the boards (or ancient stones, in this case!), others in a more behind-the-scenes capacity: working away diligently backstage to ensure that set, props, costumes, make-up and sundry other necessities meet the excellent standards audiences now expect. “The Shakespeare at Curium involves many people for a period of months each year,” explains Colin. “Many have participated in a number of plays over the years, but by and large, the whole entity is born anew and the participants are for the most part newcomers.”

Which leads us back to the ‘almost’. Because, in June 2018, for the very first time, the Shakespeare at Curium Did Not Take Place. 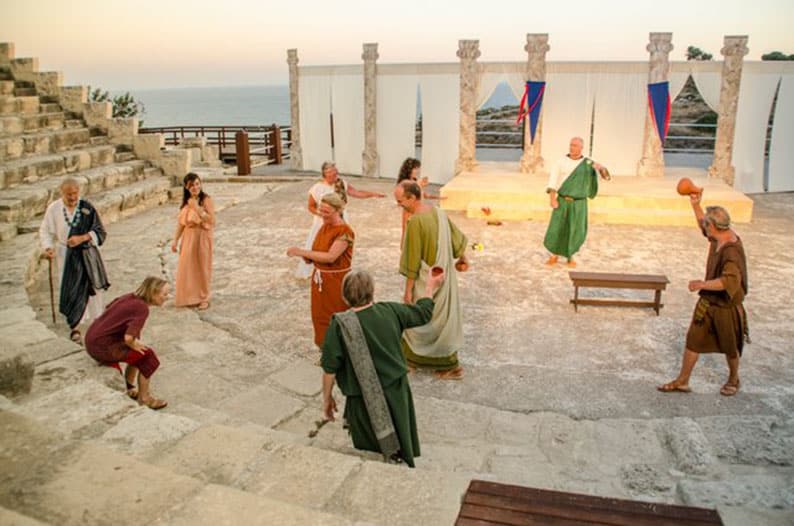 Pause for a minute and consider the enormity… This is an institution which went ahead during the invasion. It ran throughout the post-war years, and continued its good work right through the millennium and the economic crisis. And yet, this year, 2018, there was no performance. For the first time since 1962, the Shakespeare at Curium was called off – not only a sad break in a wonderful tradition, but also a great loss to the island’s charities… 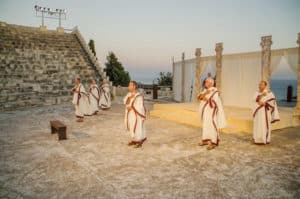 “The decision has been a great disappointment to everybody concerned as there can’t be many venues in the world which compare: high up on the cliff top, fantastic views, the sun setting in the background – it’s pure magic for the cast and the audience,” ran the official cancellation statement. The reason? Well, “Unforeseen difficulties which rendered a quality performance unlikely, plus subsequent failed attempts to refloat the play” translates into what is probably a combination of the post-haircut exodus and a general reluctance to get involved.

But, as hundreds of audience members discovered their annual theatrical treat had been cancelled and charities all over the island lamented the loss of funding, a small band of dedicated thespians have been working away behind the scenes to ensure 2018 is a mere smudge on an otherwise triumphant timeline… In 2019, the Shakespeare at Curium WILL BE BACK!

“Now, more than ever, we are determined 2019 will see a stirring and impactful production that will once again bring to life the words of Shakespeare,” Colin asserts. “We’ve already booked Curium for a performance of Hamlet next June…”

With a social evening (a ‘Get To Know the SAC’ event) taking place on October 12, and auditions on November 24, all that’s now needed to get things back on track is a cast and crew. And that means you! Whether you’re an experienced Shakespearian or a total novice (or even handy with a hammer or needle!) the committee is hoping you’ll come along to either (or both) events.

“If you’ve ever been interested in being part of a play or trying your hand as a crew member, please consider this your personal invitation!” says Colin. “No prior experience is required,” he reiterates. “We want new young people to come and get to know us and have a go at acting out Shakespeare!  We’re a bunch of amateurs who enjoy the magic of Curium, entertaining an audience, and raising money for Cyprus Charities. And, together, we can create an amazing production all in the name of benefiting our local communities. In 2019, the Shakespeare at Curium WILL be back!”

The PACC are holding a social night on October 12 (most likely location will be the Aphrodite Bowls Club in Erimi), and auditions for the 2019 production of Hamlet on November 24. If you would like to attend the October social evening, please email [email protected] by October 1. For more information, visit http://www.shakespeareatcurium.com/