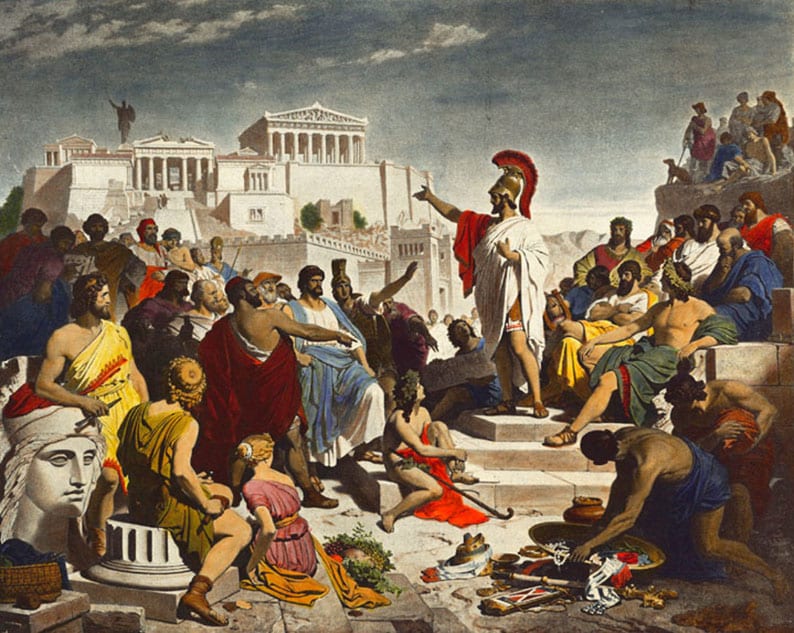 The Athenians, in classic Greece, gathered at the Agora but they did not wear masks

THE ability of parrots to imitate the human voice is truly impressive. Of course, they do not comprehend the meaning of the words the sound of which they reproduce. Equally impressive is the ability of certain humans to mimic parrots, by repeating certain expressions and messages, presumably in response to the wishes of their masters.  Similar to this is the behaviour of certain mass communication media, which consider it “politically correct” to broadcast daily the statements transmitted by the “institutional players”, without any attention being paid to the importance or the relevance of their content, a practice that inevitably results in a tsunami of information, in which the substance is lost in a sea of incidental detail, ideally accompanied by background music.

The problem becomes worse when the irrelevant detail is artfully coloured to twist substance, in order to serve the views and the interests of those who formulate and those who broadcast the statements.

In earlier times, these practices were known as propaganda but the use of the term has been severely confined, ever since it acquired a bad reputation. Of course, the word may have acquired a bad reputation but the possibilities of manipulating public opinion have geometrically increased by the plethora of the available mass communication media and networks that have rendered the unregulated use of these media effortless and inexpensive.

In parallel, we have the ‘little parrots’ (known in Greek as “papagalakia”).  As a rule, papagalakia express themselves anonymously, by using a pseudonym, either because they do not have the guts to assume the responsibility of their statements or – more likely – because something “dirty” is hiding behind them.

Once, when I dared to take the view that it is inappropriate to express views and opinions (particularly on sensitive national issues), while you cover yourself behind anonymity, I was confronted with the argument that, throughout the ages, many writers have chosen to write poems and novels under pseudonyms!

I must say that I fully understand the reasons that prompted the late Elena Frantzis to use a pseudonym when she appeared, in 2011, on the popular “Elita” TV programme, in order to describe her ordeal in the hands of her adopted father, but why on earth should somebody take a stand in favour or against the partition of Cyprus under a pseudonym?

When one reads literature jewels that have a timeless value, such as “The Odyssey” or “Crime and Punishment”, he or she does not evaluate these stories on the basis that they were written by Homer or Dostoyevsky.  Quite the opposite.

The reader evaluates the authors on the basis of the literary masterpieces they have created.  Admittedly, the vast majority of authors (novelists, poets etc.) are doomed to end up in oblivion because what they have written is ephemeral.

Indeed, because such pieces are doomed to end up in oblivion, it is irrelevant whether they are anonymous or eponymous.  In contrast, journalists and political commentators refer to the present and, inevitably, impact the future.

It is precisely for this reason that journalists and political commentators must disclose their identity, their experiences and their past record because this is the only basis on which the recipients of their messages can evaluate all the parameters such as their knowledge, their critical ability, their foresight, their honesty, their conflicts of interest etc that are shaping and influencing the stand they have taken.

What I am trying to say in somewhat abstract terms will become readily apparent by citing the following example. When reading a political comment, would you not feel that, in accepting or rejecting the position taken, it would be appropriate to take into consideration that the author is an agent of a foreign power the interests of which are in conflict with the interests of your own country?

Or, in evaluating a comment, would you not consider it necessary to take into account the fact that the author of the comment is on the payroll of the beneficiary of the commentary?  Anonymity deprives you of this possibility and renders you more vulnerable to propaganda.

It is not sheer coincidence that the little parrots that systematically embark on political commenting are relatively few and their anonymous involvement in the news-distribution process is systematic to such an extent that it suggests the existence of a contractual relationship.

And then, there are those who will argue that the right to express your opinion on an anonymous basis is “a fundamental human right”. I would respond to this argument by pointing out that neither the Athenians, in classic Greece, gathered at the Agora wearing masks, nor the British wear masks, when they march in the streets of London for protesting against something they are not in favour of.

Indeed, I would not hesitate to say that mask-wearing protesters, who smash windows and burn shops and – sometimes – people as it happened in a bank in Athens some years ago have nothing to do with democracy.  Apparently, a small minority of people on purpose confuse the two words democracy and ochlocracy, merely because of their homophony.

Based on the above thinking, I believe that it is necessary to render it not permissible to present news or to comment on current affairs while wearing masks; while hiding behind anonymity.  Promoting transparency in information shields pluralism, safeguards the freedom of expression, combats the tendency of politicians to take voters for a ride and, above all, protects democracy from subversive attacks.