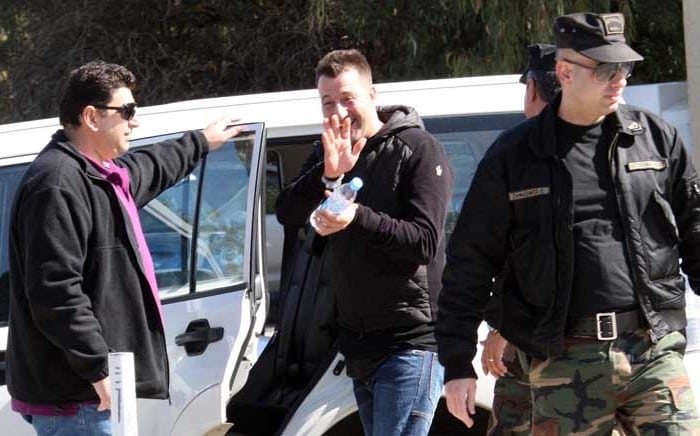 Alexis Mavromichalis, aka 'Alexoui, being taken away by police after a court appearance in 2014

On orders from the attorney-general, prosecutors on Monday stayed proceedings in a case involving a plot to murder local gangland figure Alexis Mavromichalis or Alexoui.

The court ordered a stay of prosecution against three Serb nationals, suspected of conspiring to murder Mavromichalis in 2016.

Two of the men – believed to have been the hired hitmen – had been extradited to Cyprus, while the third was already a convict at the central prisons, serving out a sentence for a drugs-related offence. The latter was believed to have arranged for the €100,000 kill contract.

The first hearing in the trial had been slated to take place on Monday. But in court, state prosecutors informed the court that a “significant part of the testimony is no longer available.

“As such, the evidence was re-evaluated and it was decided that, at this stage at least, prosecution cannot proceed and is stayed.”

The three suspects are to be deported.

Media reports, which remain to be confirmed, said the reason was that Mavromichalis and another witness for the prosecution decided against testifying.

In pre-trial hearings, police had told the court that on March 22, 2016, they had received an urgent message from Belgrade Interpol notifying them of an impending contract killing.

Serbian authorities had been investigating a crime ring when they found out that a number of its members were in Cyprus plotting a murder.

The court heard that one of the wanted men had contacted an unknown individual in Nicosia’s central prison, who eventually hired him to carry out the contract for €100,000.

The two hitmen arrived in Cyprus through the north at the end of March.

On April 5, Serbian Interpol informed the police here that two of the currently wanted men had returned to Serbia the previous day and would return at a later date to carry out the hit.

On April 13, it was arranged for a down payment to be paid during a meeting in Thessaloniki, Greece.

The two men returned to Cyprus three days later, again using Tymbou airport in the north. But the men left the island some three hours later after they had been tipped off that they were being monitored.

Later, in 2017, it transpired that someone at the Interpol office in Cyprus had inadvertently alerted criminals in Serbia that the murder suspects were under surveillance – leading to the hit being called off.

A subsequent internal police investigation found no criminal wrongdoing by the Cypriot police officer, attributing his actions to blunder.

Rosenstein has not resigned, still US deputy attorney general -source