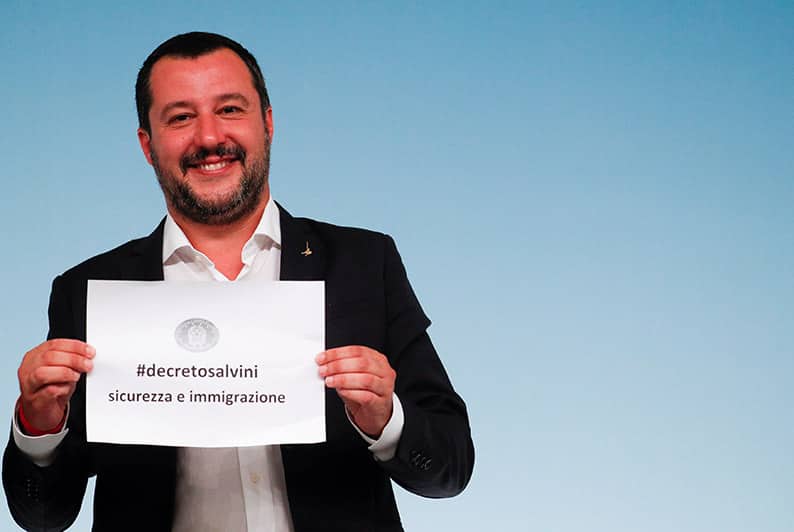 Italy's Interior Minister Matteo Salvini holds up a piece of paper with the name of the new decree written on it during a news conference with Prime Minister Giuseppe Conte at Chigi Palace in Rome, Italy, September 24, 2018

Italy’s  government on Monday escalated its clampdown on irregular immigration with a decree aimed at slashing the number of people awarded asylum and doubling the time irregular migrants can be detained.

The legislation promoted by Interior Minister Matteo Salvini, who leads the League party, comes as the minister refuses to allow charity ships carrying rescued migrants to dock in Italy’s ports.

“This is a step towards making Italy safer,” Salvini tweeted.

The League, which took power in June in coalition with the 5-Star Movement, has promised to deport hundreds of thousands of illegal migrants. Already, the move to refuse to let rescue boats dock has proven popular, doubling opinion poll support for the League since the election in March to more than 30 per cent.

The Salvini Decree aims to limit the use of a form of international protection that has been widely used in recent years but is not strictly tied to political persecution or war.

“Humanitarian” asylum was given to more than 20,000 people last year, or 25 per cent of those who sought asylum, against the 16 per cent of asylum seekers awarded one of the other two forms of international protection.

It is given to migrants who are deemed to have “serious reasons” to flee their home country – a category that has often included homosexuals fleeing harsh anti-gay laws in Africa.

“Humanitarian protection was supposed to be used sparingly,” Prime Minister Giuseppe Conte told reporters. “In Italy, there has been an indiscriminate reception (of migrants) and the rules helped support this.”

Other immigration measures include extending to 180 days from 90 the time an irregular migrant can be detained before being freed, to give the state more time to complete the deportation procedure.

The decree would also widen the range of criminal offences that trigger the stripping of asylum privileges applied for or already granted.

Such a move could fall foul of the 1951 UN Refugee Convention, which is intended to protect all refugees, whether formally recognised or not, from being forcibly returned, except where they are a danger to public safety or national security.

Before the government approved the draft decree, a source in President Sergio Mattarella’s office had said parts of it might be unconstitutional – which could open the way for Mattarella to block it

The new immigration guidelines were packaged together with new security rules in an emergency decree, which has 60 days to secure parliamentary approval. Salvini said parliament was likely to make changes.

The security measures include heightened controls on those who rent trucks, in response to a series of attacks in Europe aimed at causing mass casualties. It also foresees stripping naturalised foreigners who are convicted on terrorism charges of their Italian citizenship.