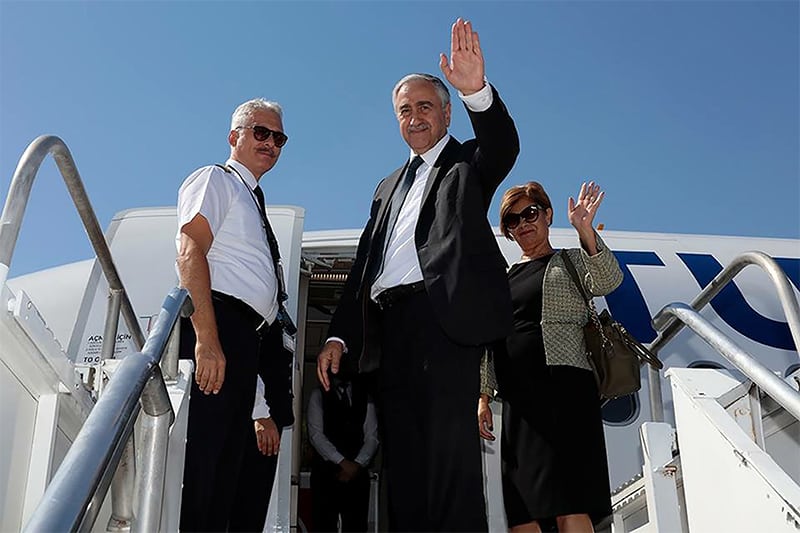 Expectations for a new dynamic on the Cyprus problem seemed low on Tuesday after a series of meetings on the side-lines of the UN General Assembly.

According to CyBC, the parties involved in talks on the Cyprus problem are not expecting anything new in Cyprus talks over the coming months, and are awaiting the UN Secretary General to decide whether he will make recommendations or assign his envoy Jane Holl Lute to meet with all the parties involved.

During the meeting, which lasted approximately an hour, Tsipras reiterated that talks need to restart from where they left off in Crans Montana and based on UN Secretary General Antonio Guterres’ recommendations.

He also told Erdogan that the talks between the Greek Cypriot and the Turkish Cypriot sides need to start again.

A Greek government official said the Turkish President reaffirmed his support for the Guterres framework, and reiterated Turkey’s position on the Cyprus issue.

Also on Tuesday, the foreign ministers of the three guarantor powers, Greece, Turkey and the UK, met to discuss the Cyprus problem and the way forward.

Before he left for New York, Turkish Cypriot leader Mustafa Akinci welcomed the informal meeting of the three foreign ministers but stressed that ultimately it must be the Cypriot people themselves who will implement and live with a solution.

He said his contacts in the Big Apple would commence on Wednesday, culminating over the weekend when he is due to meet Guterres.

The Turkish Cypriot leader spoke of a “different climate” being shaped this time, noting that in light of UN envoy Jane Holl Lute’s recent report, the UN chief will want to hear ideas from all interested parties on how the process can now be moved forward.

“The cycle of the old negotiations on Cyprus is now closed. Processes without a timetable, which are not results-oriented, can only get stuck in time,” he told reporters.

Akinci said the latest talks under UN auspices, taking place in the summer of 2017 at the Swiss resort of Crans Montana, failed because of the Greek Cypriots’ unwillingness “to accept the true meaning of power-sharing and shared prosperity with Turkish Cypriots within a federal partnership.”

But it was important to look ahead, since a mutually acceptable settlement on Cyprus would benefit not only the Cypriots but also Greece and Turkey.

“It has to be understood that progress in relation to the Cyprus problem on the one hand, and on the other hand cooperation on natural gas resources, where we too have rights, together with steps supporting the Turkey-EU customs union, will be to the benefit of all interested parties.

“In short, this should be the common vision,” he added.

Commenting on the guarantors’ meeting, Akinci said it was “perfectly natural” for officials of the three guarantor powers to discuss the Cyprus issue.

“However, there is something that one should not forget. Any solution in Cyprus will need to be implemented and experienced by the Turkish Cypriots and the Greek Cypriots. Let no one lose sight of this. Because, at the end of the day, it is the will of the two communities that will keep a solution alive.”

Although describing the trilateral meeting as a positive development, Akinci stressed that “the work does not begin and end with it, and this needs to be well understood.”

On the planned opening of crossing points at Dherynia and Apliki, the Turkish Cypriot leader said that on his side all the logistics were in place.

The delay on the Apliki crossing was due to ongoing works along a 3km stretch of road on the Greek Cypriot side and due to land appropriations in the area.

“On our side, we are ready. It has been some time that we have finished with the roads in Dherynia and in Apliki. What remains to be done there is to install cubicles and to arrange for electrical, telephone and internet connections.”

He forecast that the crossings would be opening “very soon.”

But Akinci bemoaned the fact that the opening of the two crossings was not coupled with other confidence-building measures, such as the proposed link between the mobile phone networks and electrical grids of the two communities.

Another proposal that had been floated, he said, was a programme where teachers would visit schools on either side.

“They [Greek Cypriots] insist on not visiting our schools. Their pretext is that this would be tantamount to ‘recognising’ us.”