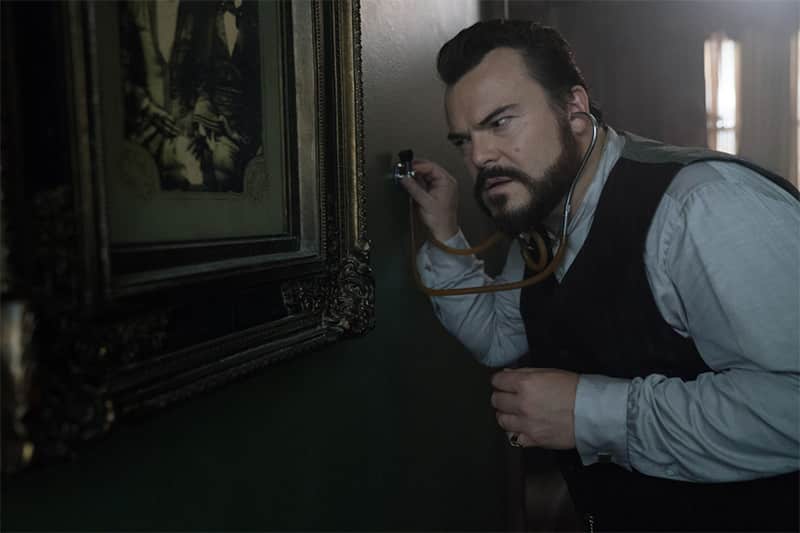 Florence Zimmerman (Cate Blanchett) has some good advice for Lewis (12-year-old Owen Vaccaro), the young hero of The House With a Clock in its Walls: “It’s not what you say, Lewis. It’s how you say it”. The same holds true for kids’ films in general – it’s the ‘how’, not the ‘what’ – though House is quite a refreshing ‘what’ as well, part of a kiddie sub-genre we don’t get to see very often: the juvenile horror fantasy, not just adventurous like Harry Potter but actively creepy too, a lineage stretching from the horror comics of the 1950s (when the film is set) to R.L. Stine’s Goosebumps books. Jack Black starred in a big-screen take on Goosebumps three years ago – and stars here as Jonathan Barnavelt, Lewis’ eccentric uncle who’s also a “boy witch”, or warlock.

One reason why this kind of film isn’t very common may be that it’s aimed at quite a narrow demographic: too (potentially) upsetting for under-10s, too babyish for over-14s. Those in the sweet spot, however, can enjoy many of the staples of the genre (the source is a 1970s novel by John Bellairs, doubtless read in childhood by 40-ish director Eli Roth), including an orphan, a spooky old house – locally known as “the slaughterhouse” – and such thrilling details as a spell that requires actual blood to be spilled on a parchment. Lewis takes a penknife to his palm easily enough – though he’s otherwise a bookish child, fond of browsing through dictionaries, responding to his mum’s generic “You have to be brave” with a painfully honest “But Mum, this is me! I’m not brave!”.

Mum is dead, of course, but appears to him in dreams – or does she? One admirable trait here is that Lewis (unlike Harry Potter) is a flawed protagonist. He’s vulnerable, even a bit of a crybaby, and the audience begins to suspect that he may be being played by the evil residing in the house (actually its former occupants, an embittered sorcerer named Izard and his wife). Another admirable trait is that characters aren’t always what they seem – notably at school, where Lewis, the awkward new kid with oversize glasses (his nickname is ‘Goggles’), makes a friend in Tarby (Sunny Suljic, from The Killing of a Sacred Deer), a popular boy who turns out to be… not evil, just disappointing. It’s subtle work from Roth, a director not usually noted for his subtlety. (I also liked the blink-and-you’ll-miss-it way he establishes that Florence is a Holocaust survivor.)

There’s some good stuff on the margins of this movie. There’s also some regrettable stuff on the margins of this movie, including some pee and poo jokes – presumably there to reassure younger viewers who may be getting slightly unnerved – and some truly awful CGI at the climax (you’ll know it when you see it). The core of the film is a jolly adventure, with our heroes trying to find the titular clock before Izard rises from the grave, interspersed with Lewis’ wimpy-kid adventures at school, his increasing Harry Potter-isation at home, plus the constant banter between Uncle Jon and next-door neighbour Florence, loveable witches and weirdos both. He calls her a “purple pachyderm”, she calls him “weird beard”; she brandishes a brolly, like Mary Poppins, he plays saxophone in a fez and kimono. Then there’s the house, woozy with production design: creepy dolls, jack-o’-lanterns, topiary gryphons in the garden outside. A giant purple serpent suddenly lunges from behind a door, but Uncle Jon says not to worry – that’s just Florence’s pet snake ‘William Snakespeare’. It’s that kind of movie.

House isn’t likely to become a classic, even in this underseen sub-genre: there’s nothing really first-rate about it. Still, the boy (or girl) magician is a powerful concept – tying in, as the film acknowledges, with a child’s developing sense of self and identity. Magic is explicitly personal here, much more so than in Harry Potter where magic was a set of rules to be learned. Lewis reads a spell very stiffly, without confidence, and nothing happens – because it’s not what you say, it’s how you say it. Magic is a kind of self-expression, almost a kind of performance art; you’re supposed to bring your own distinctive style to it. (Later, the kid makes up his own flamboyant spell and even his elders are impressed: “He’s so weird,” says Florence appreciatively.) The House With a Clock in its Walls also has its own style – not so much a visual style as a jaunty Addams Family vibe (coupled with a slightly more-emotional-than-expected take on the kid’s problems) that helps it to stand out, in a modest way. The ‘how’ is amusing here. The ‘what’ isn’t bad either.