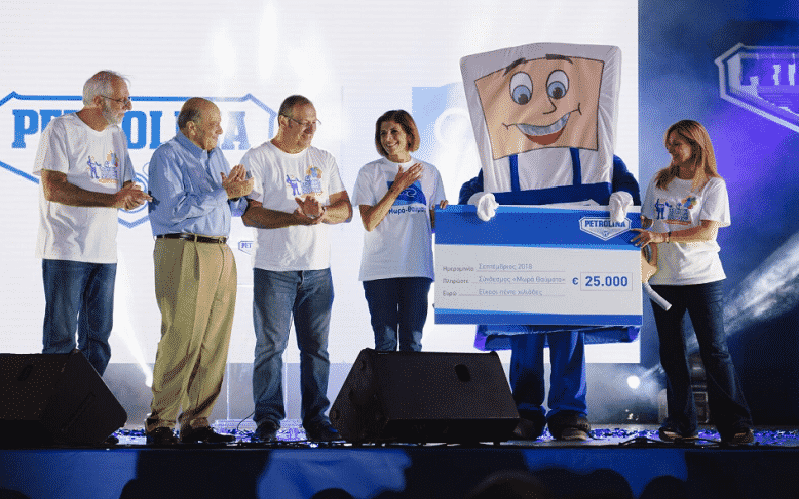 Great success with thousands of people

A vibrant atmosphere of love and generosity flooded the Europe Square in Larnaca during Sunday afternoon ,September 23rd, 2018 in support of the ‘’Mora Thavmata’’ Association, making the 4th Petrolina Charity Festival a resounding success, attracting thousands of visitors of all ages.

With the message ‘’Together we can make miracles happen’!’’ Larnaka hosted one of the most entertaining charity events of the year.  The public’s impressive participation and the passionate work of more than 300 volunteers from the Petrolina Community, the Petrolina Kids Community, and other friends volunteers, made the 4th PETROLINA Charity the most successful ever, helping the ‘’Mora Thavmata’’ Association meet its goal.

The event featured many fun and sports activities.  Kiosks with various games for all ages were set up, while the entertainment stood out for its quality and variety. The festival, hosted Dimitris Ougarezos closed with the famous live concert by MELISSES, which sparked enthusiasm among attendees.

Entrance and participation to the games were free while all proceeds from the sales of food and drinks will be donated to ‘MORA THAVMATA’’ association.  PETROLINA further supported the association with an added donation of €25,000, given to Mrs Stella Kyriakidou, Chairwoman of the association during the event.

A distinguishing presence at the festival was Olympic medallist and World Champion in sailing Pavlos Kontides with his laser boat, whom everyone had the opportunity to meet and get a picture with.  Rally champion Simos Galatariotis and Constantinos Charalambides, Chairman of the ‘’Goal in Life’’ as well as other famous footballers, also added to the excitement by handing out autographs and posing for photographs.

Petrolina’s Executive Director Mrs Georgia Lefkariti, expressed warm thanks to the volunteers of Petrolina who, for, yet another year, worked tirelessly and passionately,  noting that “volunteerism has been  embraced by all  PETROLINA employees, demonstrating  generosity  and solidarity through numerous actions toward Cypriot society’’.