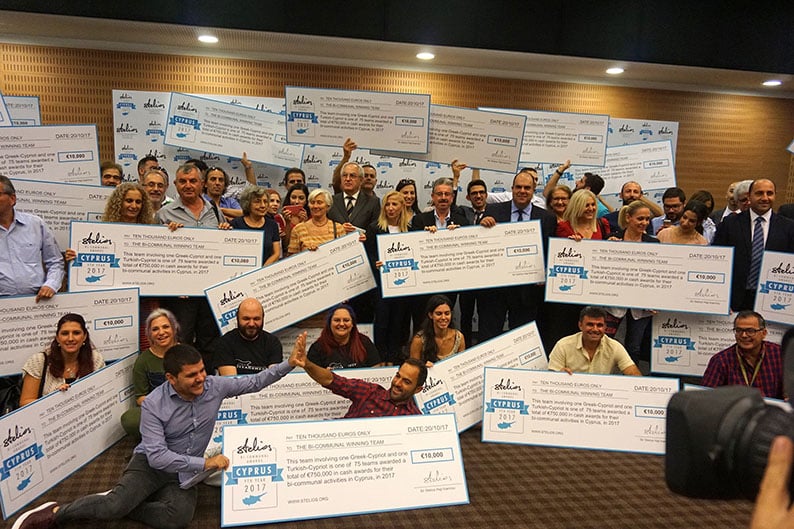 Sir Stelios Haji-Ioannou has announced the 50 bi-communal teams each of which will receive cash prizes of €10,000, among them 16 couples.

This year, nearly 700 Greek-Cypriots and Turkish-Cypriots collaborated and submitted their applications for Stelios Bi-Communal Awards 2018, to win one of the 50 cash prizes that are offered by the Stelios Philanthropic Foundation. Since 2009, the total value of the awards that were granted to bi-communal collaborations adds up to €3,250.000.

The winners have been selected from various backgrounds including business, sciences, arts, sports, NGO work but also the partners in life category which concerns bi-communal couples.

This, he said, was expected given the negative climate currently concerning the Cyprus problem.

“However, focusing on the positive side, still having 700 people apply is a good result for lasting peace on the island.”

Sir Stelios said that his favourite category, which is the partners in life one, is the only category that has shown an increase year on year with the foundation now giving 16 awards this year compared to nine last year.

“At least at a human level the relations between the two communities are improving. We will be there to keep working for lasting peace on the island for the long run!” he said.

The selection was done in such a way in order to give 60 per cent of the prizes to new applicants and the rest was divided between past winners, and past applicants who have not won before. The idea was to encourage new forms of cooperation but also encourage people to keep applying year after year.

Winners in the business category concern joint law firm activities, the publication of a recipe book with traditional food and sweets, architectural heritage walking tours, a digital directory for healthcare sector activities, boat services, and the brewing of a bicommunal beer.

In the arts category winning teams’ projects concern among others a bilingual poem book, the production of a short film entitled “The Hunt”, art therapy workshops, a play – theatre – for deaf people, a bicommunal band called the “Blind Man’s Tale”, and a book about heritage fashion in Cyprus.

Among the five awards given to projects in the science category were for a research project on mental illness between Greek Cypriots and Turkish Cypriots, a bicommunal study to improve the life and educational conditions of students with special educational needs and to two archaeologists that work for the Committee on Missing persons.

Nea Salamina and Magusa FC have been awarded one of the prizes in the sports category to play a friendly football match.

The Greek Cypriot and Turkish Cypriot community leaders of the mixed village of Pyla, have also been awarded a prize.

As regards the “partners in life” category, an announcement said that it that stands out for backing the overall downward trend in applicant numbers in other categories. “This year the applicants in the “partners in life” category saw an increase in applicants of 2.5 times since last year. As in previous years, a generous proportion of the awards is given to this special category of human cooperation.”

The aim of Sir Stelios’ philanthropic act for the past ten years, it said, is to encourage cooperation between the members of the two communities in Cyprus and to establish lasting peace on the island.

The Awards Ceremony this year that will be held on October 3, will only include the winning teams and their spouses, at the newly acquired Headquarters of the Stelios Philanthropic Foundation, on 5 Markou Drakou street, Nicosia, which is walking distance from the Ledra Palace.

For more information on the winning projects:  http://stelios.org/