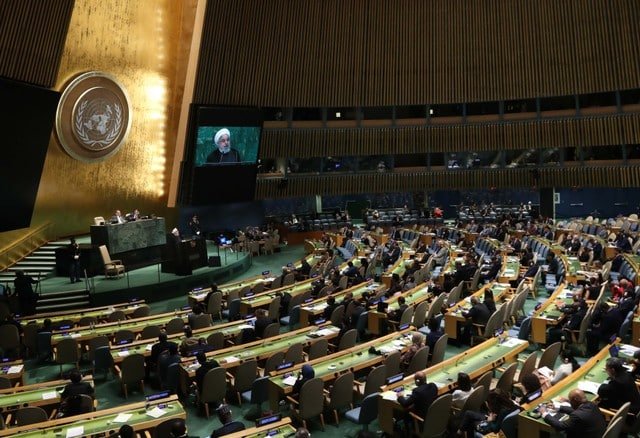 Trump used his annual address to the United Nations to attack Iran’s “corrupt dictatorship,” praise last year’s bogeyman North Korea and lay down a defiant message that he will reject globalism and protect American interests.

But much of his 35-minute address was aimed squarely at Iran, which the United States accuses of harboring nuclear ambitions and fomenting instability in the Middle East through its support for militant groups in Syria, Lebanon and Yemen.

“Iran’s leaders sow chaos, death and destruction,” Trump told the gathering in the green-marbled hall. “They do not respect their neighbors or borders or the sovereign rights of nations.”

Rouhani, addressing the assembled world leaders later, sharply criticized Trump’s decision to withdraw from the 2015 international nuclear deal with Iran. He said he had “no need for a photo opportunity” with Trump and suggested the U.S. president’s pull back from global institutions was a character defect.

“Confronting multilateralism is not a sign of strength. Rather it is a symptom of the weakness of intellect – it betrays an inability in understanding a complex and interconnected world,” he said.

Trump’s address was met largely by silence from world leaders still not comfortable with go-it-alone views that have strained U.S. relationships with traditional allies worldwide.

His speech, while delivered in a low-key fashion, was nonetheless a thunderous recitation of his “America First” policies. He has disrupted the world order by withdrawing the United States from the nuclear deal and the Paris climate accord, and threatened to punish NATO nations for not paying more for their common defense.

“We will never surrender America’s sovereignty to an unelected, unaccountable, global bureaucracy,” Trump said, in language popular with his political base. “America is governed by Americans. We reject the ideology of globalism, and we embrace the doctrine of patriotism.”

Besides calling out Iran, Trump also criticized China for its trade practices but made no mention of Russia’s interference in Syria’s war or its suspected meddling in U.S. elections.

Rouhani was defiant in his speech to the world body.

“What Iran says is clear: no war, no sanctions, no threats, no bullying; just acting according to the law and the fulfillment of obligations,” Rouhani said.

Offering an alternative view when it was his turn at the podium, French President Emmanuel Macron told the delegates that the law of the survival of the fittest, protectionism and isolationism would only lead to heightened tensions.

Defending multilateralism and collective action, he said nationalism would lead to failure and if countries stopped defending basic principles, global wars would return.

“I do not accept the erosion of multilateralism and don’t accept our history unraveling,” Macron told the assembly, at times raising his voice. “Our children are watching.”

Macron, citing the example of Iran, said that this unilateralism push would lead directly to conflicts.

Trump, who begins his political rallies with boasts about his economic record in less than two years in office, used the same rhetoric before the crowd of world leaders and diplomats, telling them he had accomplished more than almost any previous U.S. president.

The remark led to some murmuring and laughter in the crowd, taking the president slightly aback.

“I didn’t expect that reaction, but that’s OK,” he said.

Trump attempted to drive a wedge between Iran’s leadership and its people, days after an attack in southwestern Iran on a military parade killed 25 people and unsettled the country.

In remarks to reporters on his way to his speech, Trump said he would not meet the Iranians until they “change their tune.” Though he held out the possibility of a better relationship in the future, he made clear economic pressure on Iran would not abate.

Trump’s national security adviser, John Bolton, addressing a group called United Against a Nuclear Iran, called the 2015 accord “the worst diplomatic debacle in American history” and had a warning for “the mullahs in Tehran.”

“If you cross us, our allies, or our partners; if you harm our citizens; if you continue to lie, cheat, and deceive, yes, there will indeed be HELL to PAY,” he said.

In May, Republican Trump withdrew the United States from the deal to put curbs on Iran’s nuclear program in exchange for easing sanctions. France, Britain, Germany, Russia, China and the European Union were part of the accord with Iran.

Foes for decades, Washington and Tehran have been increasingly at odds since May. The accord with OPEC member Iran was negotiated under Democratic U.S. President Barack Obama.

“Additional sanctions will resume November 5th and more will follow and we are working with countries that import Iranian crude oil to cut their purchases substantially,” Trump said.

Trump compared U.S. relations with Iran to what he called improved ties with North Korean leader Kim Jong Un, who Trump had met in Singapore in June as part of a still-unfulfilled drive to get Pyongyang to give up its nuclear weapons.

In his address last year to the U.N., Trump insulted Kim as a “rocket man” bent on nuclear destruction. On Tuesday, Trump praised Kim for halting nuclear and missile tests, releasing Americans held prisoner and returning some remains of U.S. soldiers killed in the 1950s Korean War.

The two leaders are trying to arrange a second summit. Trump has said sanctions on North Korea would remain for now.

Delivering a harsh message to OPEC members, Trump called on them to stop raising oil prices and to pay for their own military protection. He threatened to limit U.S. aid only to countries that are friendly to the United States.

Anwar Gargash, UAE Minister of State for Foreign Affairs said oil prices were driven only by markets, by supply and demand. “These are not things that can be manipulated by a decision here or there,” said Gargash, whose country is an OPEC member.

Crude oil prices shot to a four-year high on Tuesday, catapulted by imminent U.S. sanctions on Iranian crude exports and the apparent reluctance of OPEC and Russia to raise output to offset the potential hit to global supply.