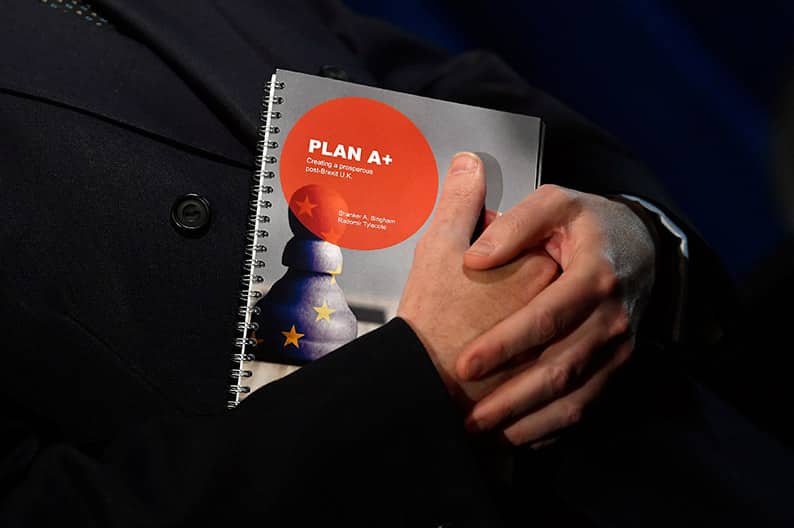 Leading Conservative Party Brexiter Jacob Rees-Mogg holds a copy of a trade plan for a post-Brexit Britain, in London

he European Union will wait until November before kicking off full-blown preparations for a possible collapse of Brexit talks, diplomats said, reluctantly accepting that such a scenario would still require some managing.

EU envoys of the 27 countries remaining in the bloc after Brexit discussed on Wednesday stepping up contingency planning should no agreement with Britain emerge on how to run the unprecedented process.

“We will wait for if and when the negotiations with Britain officially fail to kickstart more open work among the 27 on preparing for a no-deal,” a senior EU diplomat said. “We’ve given ourselves until November.”

The 27 EU leaders have agreed to meet on the weekend of Nov. 17-18 to sign off on any agreement with Britain, which on March 29, 2019, will become the first country ever to leave the bloc.

“There are areas where we need to act to have something in place on March 30th no matter what,” the diplomat said.

Some EU diplomats and officials reacted with irony to dozens of no-deal guidance papers issued recently by London, saying they envisage a lot of cooperation – and trust – between the sides even in the case of negotiations breaking down.

“That’s a lot of deals assumed on the British side for a no-deal scenario,” said another diplomat dealing with Brexit in Brussels. “But it’s probably true that for some areas like air traffic we will have to make sure we go on.”

While a temporary extension of existing rules could work for air traffic or mutual assurances of citizens’ rights, they would be more problematic in areas such as customs.

And EU states differ on how far the bloc should go to mitigate the disruptions in a no-deal scenario.

The future customs border is the key point of contention in the negotiations as the sides differ deeply over how to avoid installing border checks between EU state Ireland and Britain’s province of Northern Ireland after Brexit, something they fear could upset the island’s Good Friday peace agreement.

Deep divisions in Britain – among the population, the two main parties and even in Prime Minister Theresa May’s own cabinet – is another risk factor.

Bitter political infighting in Britain has spooked the EU that any Brexit deal they may get with London would be struck down by the British parliament.

Both sides appear to have dug in their heels after a meeting in Salzburg last week between May and the other 27 leaders turned sour, with the EU rejecting her compromise plan that would see continued free trade in goods after Brexit.

But every negotiation also has its share of political theatre – something a third senior EU diplomat called “the ritual dance” – and each side hopes the other will blink first.

The EU and Britain are now negotiating a divorce deal. Should they agree on that and the agreement is ratified by both the British and the EU parliaments, Britain would get a status-quo adaptation period until the end of 2020.

That would delay most of the real effects of Brexit kicking in. Most EU diplomats and officials say that transition period would have to be extended as two years is unlikely to prove enough to negotiate future cooperation agreements on issues ranging from trade to security and food safety.