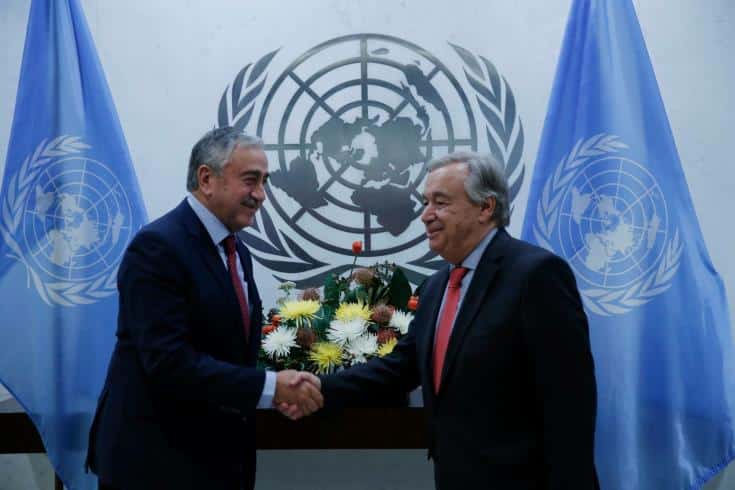 There was no question of seeking a settlement outside the UN parameters, Turkish Cypriot leader Mustafa Akinci said on Friday, but a new process with a clear objective and timeframe must be established in the negotiations.

Akinci me United Nations Secretary  General Antonio Guterres with whom he exchanged views on the prospects for renewed Cyprus talks.

A statement issued by the UN after the meeting said: “the Secretary-General and Mr. Akıncı exchanged views regarding the prospects for renewed talks on the Cyprus issue since the closure of the Conference on Cyprus in July 2017.”

The meeting was held on the sidelines of the UN General Assembly.

Speaking at a news conference after the meeting, Akinci said there was no question of seeking a solution beyond the UN parameters.

“Guterres wanted once more to hear from us how we assess the process we are in and we explained our thoughts in detail,” the Turkish Cypriot leader said. “We started by reminding that we are in the 50th year of negotiations.”

Akinci said the old process of negotiations has ended and it would be impossible to reach a different conclusion by repeating the same one.

“For this reason, with its persistence on open-ended negotiations, it clearly shows that the Greek Cypriot side insists on no solution,” he said.

Akinci said the objective must be a strategic package deal that will concentrate on the result and have a timeframe.

He stressed that there was no question of going outside the parameters of the UN in relation to the type of settlement.

“If there is a solution it will be within this framework,” Akinci said.

The Turkish Cypriot leader said Greek Cypriots want to avoid power-sharing to continue to have the privilege of being the sole owner of the entire island.

“They don’t want to share power or wealth with the Turkish Cypriots. We don’t have the luxury of giving up all that we have won. That is why it would be a big mistake for us to say that a federal partnership, based on two equal constituent states, including rotating presidency, is dead.”

Earlier on the same day, the UNSG met with President  Nicos Anastasiades.

Christodoulides spoke of a clear commitment on behalf of the Secretary General in resolving the Cyprus issue and resuming the talks and made reference to a statement by the SG that the solution should serve the interest of the Cypriot people above all.

Developer wins appeal to build next to popular Coral Bay