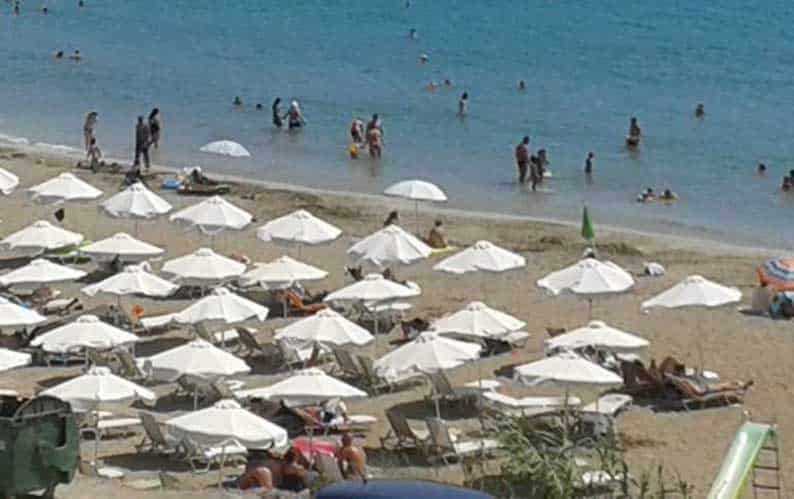 LEPTOS developers won their appeal to build next to the blue-flagged Coral Bay beach in Paphos months ago, it emerged on Friday, but local councillors were only informed of the move at Thursday night’s council meeting, they said.

The appeal is connected to the development of ‘Plot 1’ which sits above Coral Bay and has commanding views of the beach and Mediterranean Sea and has recently been used as a car park.

The plans include the construction of 22 villas and ‘services’, such as restaurants and cafes.

The popular beach in Paphos attracts thousands of visitors every year.

Although the decision was taken on May 8, the matter was only discussed at Thursday’s meeting, as the mayor, Marinos Lambrou, only recently found out by ‘accident’, councillor Achilleas Achilleous told the Cyprus Mail on Friday.

“The mayor only found out by calling the relevant authority to find out some information and was told the appeal had been approved months ago.”

He added: “I don’t have anything against the developer, but the law has changed since this planning permit application was made and the appeal doesn’t mention the regulations now. We have to stand up to the government for making this wrong decision.”

He said that according to the current land registry laws and regulations, 15 per cent of a plot of land can be developed for villas and 20 per cent if there are villas and services, such as restaurants and cafes. “You must leave a five-metre road to the beach and green areas, with a 40 per cent clear and ‘empty’ view to the sea.”

However, the councillor said that drawings shown to the council previously, depicts the view to the sea blocked, no access road and limited access down to the beach.

Peyia coalition councillor, Linda Leblanc explained that the appeal concerns a Leptos planning application made in 2005, to develop Plot 1 at Coral Bay beach, which was rejected by Paphos planning in 2005.  Leptos appealed the planning decision and it went to the ministry of interior for a decision.

“It has been pending ever since and the matter was specifically discussed with Michael Leptos at our July council meeting with the Leptos company,” she said.

Leblanc said that at the meeting, the council made it clear that they were willing to discuss development of the plot, but under the current planning laws and not those of 2005.

The council requested that Leptos withdraw the appeal and the parties involved could then proceed with discussions about what the developers planned to do there. However, it has since emerged that the appeal had already been given the green light before this meeting took place.

Last month the developer sent a draft proposal to the mayor, which the council were shown at Thursday’s meeting. The proposal does not mention the appeal case and includes building in the coastal protection zone, and at a higher density than current legislation, said Leblanc.

Both councillors agreed that Peyia’s main concerns are those of public interest, such as ensuring there is public access to the beach.

“We also need to ensure the cash flow, the municipality makes around €800,000 net income per year from beach beds, umbrellas and the two kiosks,” she said.

Leblanc said that the rights of the owner to develop land are accepted, provided that they are according to the current laws – after the municipality’s failed attempts for compulsory acquisition.

She also noted that following the law – current planning from 2011 – designates Coral Bay beach as a special tourist area, with zoning limits on tourist development on the land next to the beach, at between 15-20 per cent density.

“There should be 60 per cent of the land not built on, with open spaces, not blocking the view and providing public access,” Leblanc said.

She also pointed out that about one third of the plot falls in the coastal protected zone, from the cliff side edge to the high-water mark.

“This is where Leptos would like to have services – such restaurants and play areas.”

Both noted that councillor will grant a request made by the developers, and meet again next week.

Our View: So-called dialogue and consensus always favours the unions