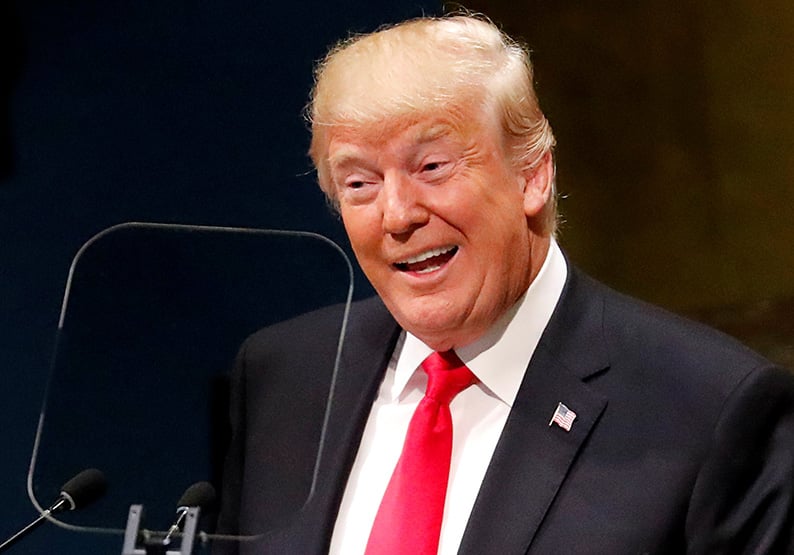 The last time the UN General Assembly laughed at something said or done by a leader of a big power was when Nikita Khrushchev angrily banged his shoe on the lectern at the podium. The assembly at that time may have been laughing at Harold Macmillan’s humorous riposte calling for an interpreter of the language of shoe-banging, but in the case of President Donald Trump they laughed because he was being hyperbolically boastful.

Khrushchev’s granddaughter Nina Khrushcheva, who is an American citizen, said in an article recently with the benefit of hindsight that the laughter at her grandfather’s expense was a humorous anecdote against the background of the horrifying realities of the Cold War, one that she was able to look back as an amusing interlude – the Cuban missile crisis, the horrors of the Vietnam war and the murder of president John Kennedy followed soon afterwards.

According to Nina, her grandfather was a bit of a rough diamond who lost his temper after the head of the Filipino delegation expressed surprise at the concern of the Soviet Union about western imperialism when it had swallowed up the whole of Eastern Europe.

Khrushchev exploded because his attitude to East Europe was shaped by Russia’s experiences in World War II. His son Leonid was killed and Nikita himself was in Stalingrad helping out politically during the Nazi invasion. How dare this ignoramus full of false consciousness attack the Soviet Union over its treatment of East Europe, he must have thought. So he banged his shoe on the lectern and called the head of the Filipino delegation ‘a jerk, a stooge and an imperialist lackey’. A perceptive insult if you think of the interesting nature of the relationship between the Philippines and the West.

But back to Donald Trump who cannot hide his true vocation as an entertainer rather than president and commander in chief. The UN General Assembly laughed when he boasted that his administration had accomplished more than any other in history. For me what he said immediately afterwards was more significant. After the laughter died down Trump said: ‘I did not expect that reaction but it’s okay’ which was very sweet and made me warm to him. Perhaps he thought they were laughing with him not at him. My take is that just as I don’t believe Donald Trump has any strong political beliefs – according to Alex Salmond when he first met Trump as first minister of Scotland Trump was a Democrat – I do not believe he takes himself too seriously either, which is a very good attribute in a political leader.

In a perverse sort of way, he reminds me of Muhammad Ali when he used to boast he was the greatest. ‘To make America great is my goal, so I beat the Russian and I beat the Pole, and for the USA won the gold’ he bragged early in his career.

So far as Ali was concerned, however, America was not as great as American presidents like to pretend. In Ali’s book, the US produces great individuals like himself but he did not believe there was anything great about dropping two nuclear bombs on Japan or carpet-bombing Vietnam and Cambodia or the abuse of the civil rights of black people – I could go on. As Vladimir Putin said in 2013, American exceptionalism is dangerous.

Having said that here is Muhammad Ali at his most boastful: ‘I am not the greatest; I am the double greatest; not only do I knock ‘em out; I pick the round.’ And here he is full of self-deprecatory wit: ‘boxing is a lot of white men watching two black men beat each other up.’

But he was at his most devastatingly rational when he gave his reasons for refusing to fight in Vietnam: ‘why should they ask me to put on a uniform and go 10,000 miles from home and drop bullets and bombs on brown people in Vietnam while so-called negro people in Louiseville are treated like dogs and denied human rights. I ain’t got no quarrel with them Viet Cong’. And most memorably: ‘No Viet Cong ever called me nigger.’

The comparison with Trump ends there because Trump did not refuse to fight because he opposed the Vietnam War. Judging by his warmonger rhetoric and that of his national security adviser John Bolton – another hawk who avoided military service – both men relish war of one sort or another. These two draft dodgers threaten war in a way no commander with experience of action would ever contemplate.

Kemal Ataturk, Turkey’s only truly great statesman, spent the best part of his life fighting one war after another, yet the motto he left as his legacy after seeing the horrors of the battlefield was ‘peace at home, peace in the world.’ Contrast that with Bolton’s outburst that Iran will have hell to pay if it threatens the US or its allies – laughable if you consider that Iran has not threatened the US and agreed not to develop nuclear weapons.

As risible as Bolton’s excuse for draft dodging: ‘I must confess I had no desire to die in a South East Asian paddy field. I considered the war in Vietnam already lost.’ It is tragic that soldiers die in war, but it is particularly tragic when soldiers have to die just before cessation of hostilities. This is precisely the sort of experience that makes men who survive war having seen their comrades die, sometimes literally in their arms, say never again – an experience Trump and Bolton can never call upon.

Donald Trump had a medical condition known as bone spur that helped him avoid the draft at the time of the Vietnam War. Despite his failure to serve his country in time of war, he is commander in chief because the American constitution says so. The reasons why the American president is commander in chief are historical. America’s first president, George Washington, was president and commander in chief because he was the military leader in the war of independence; and president Dwight Eisenhower, had been Allied commander during World War II. But draft dodgers like Bill Clinton, Donald Trump and John Bolton are embarrassing in matters military. Just watch Trump next time he raises his little hand to salute as he enters Marine One – the presidential helicopter. It is as pathetic as it is unconvincing!

To end where I began – boasting. Who said ‘it’s not bragging if you can back it up,’ Trump or Ali?

Our View: Anastasiades and the pretence of an interest in new talks