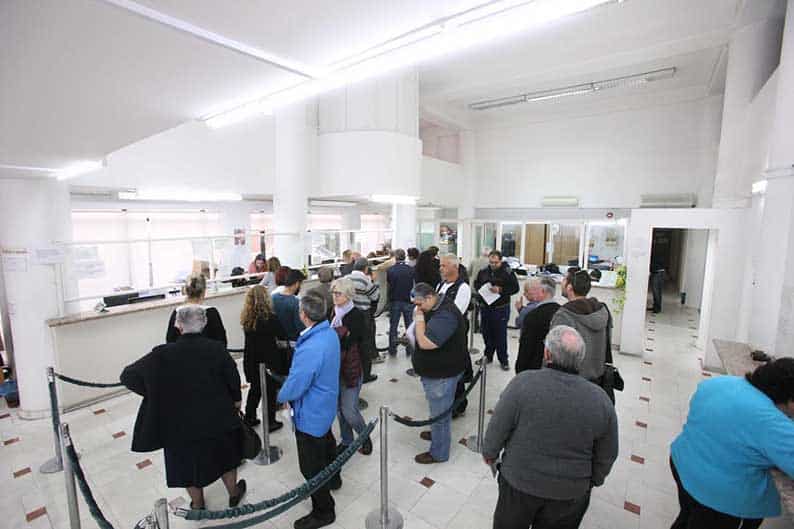 The question sprang to my mind when I read the special report compiled by the internal audit service of on the state’s revenue service or tax department).

The 40-page report covering the year ended 31 December 2016, was released last week and its contents have been extensively covered by the press.

The overall impression given to the reader is that the tax department is a shambles.

More specifically, the report alleges that the tax department fails to collect overdue tax debts, has allowed a plethora of objections filed by tax payers against assessments raised to accumulate, fails to cross-check the returns filed for VAT purposes against the returns filed for income tax purposes and it neglects to chase the companies that have registered with the Registrar of Companies but have failed to register with the tax department. The report then focuses on gyms, massage parlours, artists, football companies, football referees and MOT-testing garages.

Based on my professional experience, I am almost certain that most tax assessments that have been appealed against represent “aggressive” assessments raised for bypassing the problem associated with the deadlines imposed by statute for raising tax assessments or for forcing taxpayers to procure supporting documentation, which was practically impossible to attach to the tax returns that were filed electronically.

In view of this, it would not be unreasonable to assume that most of the assessments that have been appealed against will be squashed and, therefore, the practice followed by the revenue service of excluding these assessments from collectible taxes is, indeed, correct and appropriate.  Of course, I do agree that the practice of issuing “aggressive” assessments shortly before the expiry of the time within which assessment can be raised is a bad habit that is incompatible with the efforts exerted to cultivate a climate of trust between the taxpayers and the Revenue Service.

During the period 2010-2012, the tax assessments, which had not been collected within the time allowed for such collections, amounted to about €600 million, in total.  In the course of the economic crisis that hit Cyprus a few years ago, this amount increased to €800 million and has stabilised there.

The principal problem, which results in these taxes becoming uncollectible is – no doubt – the real inability of the taxpayers to pay the amounts due, particularly in the course of the crisis, between 2013 and 2015.  This problem is compounded and often becomes undefeatable as a result of crushing fines and penalties being imposed on top of the taxes themselves.

In my opinion, if the internal audit service was keen to aim at an objective and constructive evaluation of this problem, they should have analysed the impact of the relief given in respect of the fines, the penalties and the interest levied on overdue taxes, which was legislated in 2017 and is still in force.

I have the impression that the drastic reduction of these additional charges has and continues to have a positive impact on collections, despite the fact that many taxpayers are still confronted with the consequences of seeing their cash resources being depleted by the “haircut”, the drop in profitability, the reduction of salaries, the dramatic increase in unemployment, the collapse of the capital and the real estate markets and the movements of capital to safer heavens, which understandably followed these developments.

There is no doubt that a very substantial portion of the overdue taxes will never be collected for the very simple reason that the debtors have gone up against the wall and have left behind them many unsatisfied obligations including those that were due to the Revenue Authorities.  That certain enterprises would become bankrupt and will fail to satisfy certain of their creditors is very “natural”, particularly over a crisis period.

I believe that in the existence of clear indications that certain tax debts are uncollectible, the revenue service is acting sensibly by not giving high-priority attention to formally documenting their conclusions (and, by extension, to writing-off these debts).  This task entails a lot of effort and time, which will yield no real benefit.

An issue, to which a lot of emphasis is placed in the report of the internal audit service, is the failure of the Revenue Service to reconcile the declared revenues (turnover) for VAT purposes with the declared revenues for income tax purposes, resulting in large scale tax evasion remaining undetected.

I must admit that I have some difficulty to follow the logic of the internal audit service on this issue.  in my long career in auditing, i have not come across many cases of taxpayers being so silly to declare all their sales for VAT purposes while concealing their turnover or part of it for income tax purposes.

Here, there may be a need to explain to the reader of this article how these systems work.  VAT is quantified on a 3-monthly basis (by applying the VAT rate in force, at the time) on the value of the sales effected in that period.

Then, the VAT paid to suppliers (on the purchases effected in the period) is deducted and the remaining balance is accounted for (paid over) to the revenue service.  In contrast, income tax is levied on the amount of the profit realised in a 12-month accounting year, i.e. the amount remaining after deducting all the expenses incurred by the enterprise, irrespective of whether the expenses incurred are VAT-able (as is the case with the purchase of goods and the purchase of certain services) or not VAT-able (as is the case with salaries, rent, depreciation and various other expenses).

Such a reconciliation, although difficult, can always be attained provided the necessary adjustments are made in respect of the fact that the periods covered are not identical (coterminous), in respect of the inventories held (i.e. the goods purchased which have not been sold as yet), for the purchases of fixed assets etc.  In every case the reconciliation process entails access to the accounting records of the enterprise and it is time consuming.

Indeed, if one takes into account that the VAT returns are compiled on a quarterly basis and are filed (and the related tax is paid) within 40 days of the end of each period while the tax returns are based on the annual financial statements of the enterprise and are filed almost two years after the end of the accounting year to which they relate, it becomes apparent why the direct reconciliation of the two returns is objectively very difficult.

The impression given to the reader of the report of the internal audit service is that this exercise could lead to the collection of taxes running into millions and is simply not performed because of ignorance or negligence.  This impression is not correct, particularly if one takes into consideration the fact that when an enterprise has gone bust, the first concern of the entrepreneur is unlikely to be the compilation and submission of audited financial statements reflecting the size of the loss, which has forced the enterprise out of business!

Many enterprises open-up today and close down tomorrow

Ordinary citizens must have noticed that lots of small businesses such as gyms, massage parlours, motor-car repair garages and restaurants open up today and close down tomorrow, not because their owners choose to do so but because they are forced to close down, as a consequence of their inability to meet all the expenses generated.  In these cases, the fact that the owners had the decency to declare and account for the VAT collected should be viewed as an achievement, rather as a point for criticism.

Please, do not get me wrong.  I am not trying to say that the revenue service functions in an impeccable manner or that the service consists of public servants who deserve to be canonised soon after retirement.  Far from it.

However, I have come across people working within the revenue service, who work conscientiously for improving the situation.  It is a difficult situation that nests a plethora of interlinked problems the resolution of which entails a long and systematic effort (the particulars of which are beyond the scope of this article).

However, any attempt to address this problem in a superficial and casual fashion will probably lead to results that are the opposite of those aimed at.  The setting out of simplistic advice and naive solutions without any marshalling of priorities undermines the prospects of successfully confronting these problems.

Taxpayers can be distinguished under 3 basic categories:  (a) The law-abiding, rule-compliant taxpayers, (b) the “limited-scale” taxpayers and (c) the systematic, large-scale tax evaders.  By giving the erroneous impression that the conditions prevailing within the Revenue Service are chaotic, resulting in large-scale tax evasion remaining undetected, we end up promoting tax evasion because the taxpayers belonging to the first group will feel that they run the risk of being branded “idiots” as a result of adhering to full compliance; those belonging to the second group will be encouraged to conclude that, since their hands are already “dirty” and the risk of being detected is slim, they might as well do it on a scale that would generate some additional substantial benefits for them; while those belonging to the third group will feel fully “vindicated”.

In fairy stories, which need heroes, villains and victims, the image of Robin Hood is an attractive image, which, however, does not befit an objective and effective state internal audit service.

Police campaign to check on seatbelt use