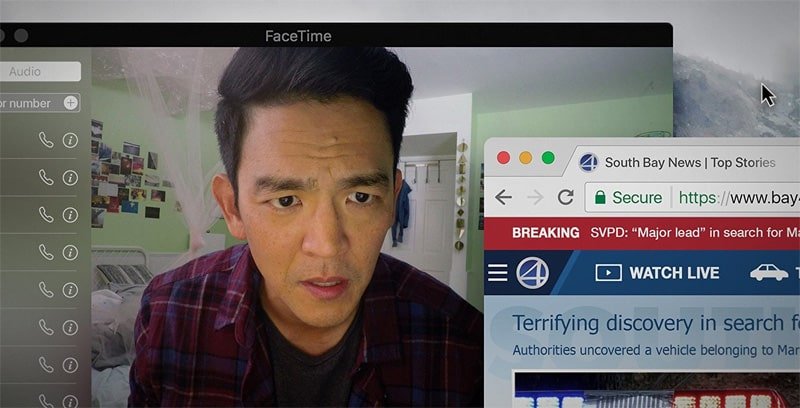 First comes the blue-sky wallpaper of a PC running Windows XP, with a glimpse of Norton antivirus (Norton! whatever happened to Norton?), then eventually YouTube and Facebook and iPhones and Google Maps. The opening montage of Searching makes a point often forgotten by middle-aged Luddites (like me) who still divide our lives into pre- and post-internet: the online world has evolved since we first encountered it. It’s no longer new, indeed it’s now almost as old as Aneesh Chaganty, 27-year-old director of this excellent thriller.

Searching is a film with a gimmick, the gimmick being that (like Unfriended from a couple of years ago) it takes place entirely on a computer screen. The gimmick isn’t totally accurate, since the film eventually strays from the computer on which David Kim (John Cho) is frantically trying to track down his missing daughter Margot – but it’s not really cheating, since the second half is also found footage (TV news reports and the like) which could be taking place on a computer, i.e. smartphone. Our entire life is computers now, a bittersweet reality reflected in that opening montage which relates the Kim family’s history entirely through their online traces.

Family videos show little Margot on her first day of school. An alarming Google search – ‘How to fight lymphoma as a family’ – suggests the life-and-death crisis engulfing the family. An email is glimpsed with ‘Remission’ in the subject line. More videos show the Kims coping. Margot’s growing up, chatting with friends, conducting her own barely-pubescent Google searches (‘What is entercourse?’). Mum has a relapse, and goes back to hospital; a calendar entry is made, ‘Mum Coming Home’ – then, with heartbreaking simplicity, a mouse hovers over the entry, right-clicks and presses ‘Delete’. Those opening 10 minutes, spiced with changing technology (to echo the Kims’ changing lives) and expertly-faked web pages, make two points about Searching. First, it’s going to be clever. Second, it’s going to be emotional.

The film captures something of the odd schizophrenia in online discourse: how rich and abundant it is – a whole world of images and stories – but also how cold and unreal. Just as that faceless ‘Delete’ in the opening minutes hides an unbearable tragedy, so the things people say online hide what’s really going on in their heads (and lives). Again and again, a line of text gets written, then deleted before being sent. At one point, David types an angry message to his daughter – then hesitates, and changes the final exclamation mark to a milder full-stop. What we say online is a halfway-house, a simulacrum; it’s what we want other people to hear – and of course online lives are compartmentalised. David talks online to Margot every day, by text or Facetime; when she goes missing, however, he realises he never had access to the secret lives she led on Tumblr, YouCast and Instagram. “I didn’t know her,” he admits to Vick (Debra Messing), the cop on the case. “I didn’t know my daughter.”

Parental guilt is one theme rippling below the surface of Searching (in one painful moment, David finds an old video of Margot presenting him with a ‘Best Dad Ever’ card on Father’s Day, and wordlessly drags it to the Trash folder); the open wound of Mum’s untimely death is another. The film is also meticulously written – and slightly overwritten – in Hollywood-textbook style; it’s the kind of film where quick mention of a [spoiler] about halfway through turns out to be a plant, paying off at the very end.

But it’s really the gimmick that makes it gripping – the sense of exploring an enclosed, secret world – especially in the first half when David goes down the proverbial rabbit hole, venturing into dead ends and in pursuit of red herrings (a creep leaving prurient comments on Margot’s photos turns out to be just an insecure boy), finally finding himself in the crosshairs as Margot’s disappearance goes viral and Dad is reduced to a hashtag: #ParentFail, #DadDidIt. If nothing else, Searching stands as confirmation that Twitter is the scummiest, most sanctimonious place on the internet.

The film gets silly at times, especially as it tries to retain the found-footage gimmick (the scene where David installs surveillance cameras is too much), but its yeah-right moments can be forgiven – both because it’s a first-time director and because, despite the implausible plotting, the underlying problems are all too plausible, and sad. A lost, friendless girl trying to hold it together, reaching out to strangers on the internet. A well-meaning dad disengaged from his daughter – though they talk all the time – hoping the tension in the air will “fix itself”. A world where work has become video conferencing, time together is Facetime, friendship is social media. Searching is by no means moralistic (it’s made, after all, by millennials), but it does evoke something of our daily unreality. I don’t know what to do, Dad tells the cop, I’ve searched every online nook and cranny. A pause: “How about offline?”.

All the world of music in one voice

Cyprus records the largest unemployment annual fall in the EU